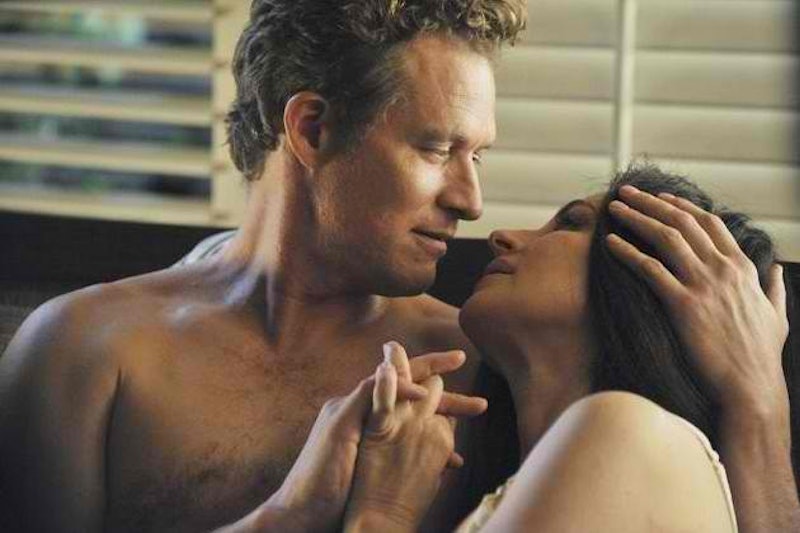 Well, that didn't last very long. It was only a matter of time before things went south with David Clarke and Victoria Grayson's "second chance" on Revenge , but I didn't think it'd be so soon. OK, fine, I knew it'd be so soon — obviously David was going to find out that Victoria lied to his face numerous times, including about whether or not his daughter was alive. On Sunday night's new episode, "Ashes," David Clarke learned that Emily is alive on Revenge and now Victoria should be fearing for her life.

I mean, I didn't believe for one second that Victoria was being sincere about her feelings for David. That woman is all about self-preservation these days and when she saw that opportunity in David's naivety and optimism, she took it. But I could see her plan to use David for her own benefit unraveling when she brought up Emily Thorne. First, when she continued the lie that Emily was dead and then when she started trying to turn David against her. Because there's one major factor that Victoria seemed to have forgotten — perhaps because her relationship with her own children is so screwed up — that David Clarke would absolutely recognize his daughter when he saw her in person. Parental love is not something to be underestimated. I mean, the last time the man saw Charlotte, she was a baby and he was going away to prison for an indefinite number of years and yet, he still remembered her when Victoria introduced them on Sunday night.

Victoria did her best to sow the ultimate poisonous seeds in David's mind about Emily from the moment she decided to commit to this plan of manipulating this man to kill his own daughter. And, I'll give her credit for this one factor, it actually worked on Sunday night. After Victoria ran out of the house, after spouting off about Emily's evil doings for the umpteenth time, David took his knife and pulled on a hoodie and went over to Emily's house to kill her. Yes, he actually planned to kill his daughter. Until he saw her face.

Just as he pulled the knife from his belt a flicker of recognition washed over David's face as he panicked between his emotions. And I can only imagine all of the things going through that man's head in that moment — first, that he'd just seen his daughter, who he believed to be dead, followed by the thought that Victoria had been lying to him and then the thought that he'd actually intended to kill his firstborn because of Victoria's manipulation. This was some heavy stuff and, well, Victoria just put perhaps the final nail in her coffin.

David Clarke might love Victoria, but he's always loved Emily more and now that he knows that Victoria lied to him about her death and attempted to manipulate him into killing her, she'd better watch her back. Because that knife is coming for her.