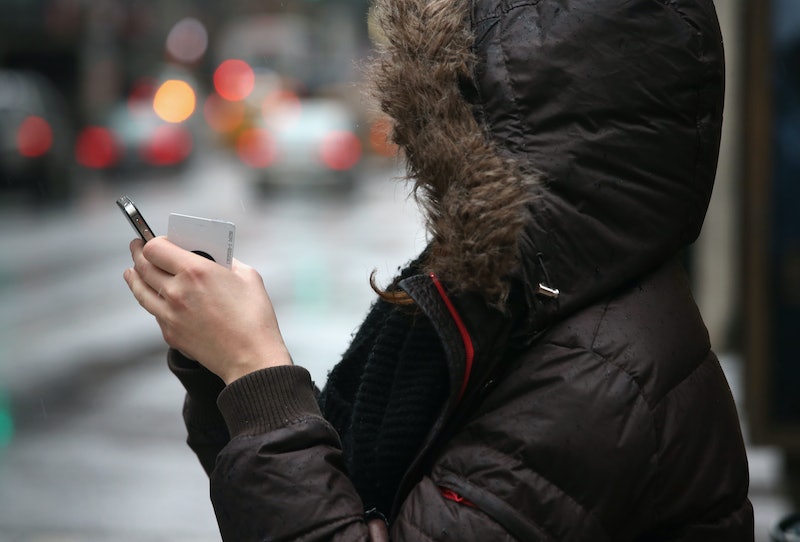 Just to give you a little insight on how bad I am with technology: growing up, I almost exclusively called the remote control a "wapper," because that's what my dad called it and that is what stuck. I have been reduced to tears by printer problems more often than I have over human relationships. I once heard an ominous rattling in my computer every time I picked it up and only after several hours of unease did I think to turn it on its side, at which point a quarter fell out of the disc drive. I'm fairly certain, if memory serves me, that I have broken several expensive pieces of machinery with my face.

Because the universe has a nice way of balancing things, I happen to have a sister who is a gifted computer science professional, which thrills me considering all the discouragement women have received in her field in the past (and to be frustratingly honest, in the present.) I rely on her heavily and shamelessly to help me navigate through the digital world. She helped me survive my first iPod sync, my first attempt at blog creation, my first upload to Sound Cloud. In short, I would not survive the Internet, nor its many affiliated gadgets, without her. But as valuable as her guidance is, there is only so much she can do. The fact remains that I am technologically-challenged, and there are still some routine struggles that people like me face:

There Are Too Many Remote Controls

Remember the nineties, when there was a "power" button on the remote and the television magically turned on? Now if you want to watch a show you have to hit the power button on one clicker, change the HDMI on another one, spin in a circle six times and chant in a lost language, and turn on the cable. And then maybe you'll be able to watch television. Maybe.

You're Especially In A War With The Apple Remote

Can I count the number of times I've tried to turn on Apple TV and ended up blasting Taylor Swift from my open laptop instead? The worst was the year that I lived below people with an Apple remote, and if I was stupid enough to leave my laptop open they had the power to set my music off at any time of the night. WHY DOES APPLE HATE ME?

Also, could those remotes be any smaller? The "needle in a haystack" idiom will be officially replaced by "Apple remote in a living room couch" by 2020.

You Keep Arguing With Inanimate Objects

A past employer walked in on me growling at the printer, "I will give you my first born, you monster, just take the cartridge." Fortunately, she is also technology-challenged and more than understood my struggle.

People Get Unreasonably Annoyed Or Alarmed When You Call Them

Most of my friends had texting and Facebook at age 14, whereas I didn't get them until college. So obviously if I needed to know if rehearsal was canceled or if we were hanging out, I'd have to call one of those friends, at which point I'd get, "Uh, you know you could just text me, right?" Or, worse: "Is everything okay?? Why are you calling? What's going on?"

My faith in regular human interaction is officially dead.

Everyone Keeps Accusing You Of Hating Trees

No, I do not want paperless credit card statements, SO SUE ME. I don't care how many times you say "but it's so easy!" I still will lose all of the internet logins within the week and end up calling some poor unsuspecting credit card company worker in a puddle of panic and despair, and then we will all be full of regret.

Because I'm 23, every employer I've ever had just assumes I'm really good with computers and technology. It never comes up in the interview, probably because they literally are assuming that I know this stuff. And when I don't, it's awkward. For example, on day one of working at a daycare, my new boss came up to me and said, "Oh, thank goodness you're here – can you set up the class iPod to play all the nap time songs?"

Yeah, hold on, I'll get on that right after I do six backflips while spinning a pizza and french braiding my hair.

I would like to make another personal shout-out to my sister for not killing me for the ten years I used these words interchangeably. Like, I get it now. Nobody was going to die when I didn't, but I get it now.

It Takes You Six Years To Google Something

And usually what you're Googling is something along the lines of "How To Turn On Camera".

I was paralyzed with indecision for a solid year after I got Twitter. What is the social implication of retweeting something? Is that too forward? If I "favorite" too many things, will people get creeped out? None of these struggles even compare to the down-and-out existential crisis I had getting on Tumblr for the first time last year and dealt with a confusion that rivaled Taylor Swift's.

Like, you all had to delete a bunch of stuff of your phones to make room for iOS8? (Truth telling: I just had to search that to make sure.) While you were all deleting your pictures and burning your apps to the ground to make room for it, I blissfully just ignored that update the way I ignore technology asking me anything. My computer has been trying to get me to install updates for the past month. HAH. Cute joke, computer. Fat chance.

You Also Feel Super Left Out When New Tech Comes Out

I see lines snaking around buildings and I genuinely wish I had enough passion in my heart for something that I'd be willing to sit in freezing temperatures and deal with sleep-deprived lunatics in the cold concrete wasteland that is the Best Buy parking lot, but I don't. I just don't.

Technology Only Keeps Getting BETTER

And everyone else is super excited about it, but guys, I'm still trying to figure out how to directly upload videos from my phone to YouTube (I don't mean to brag, but I'm pretty sure I just used the word "upload" correctly.) I need some time to catch up before you go introducing hover cars and hologram phones or whatever the hell is next.

If I end up with someone who is as clueless about technology as I am, our future family is doomed. This is natural selection at its core, folks: because if you don't figure out the technology, you will get left behind.