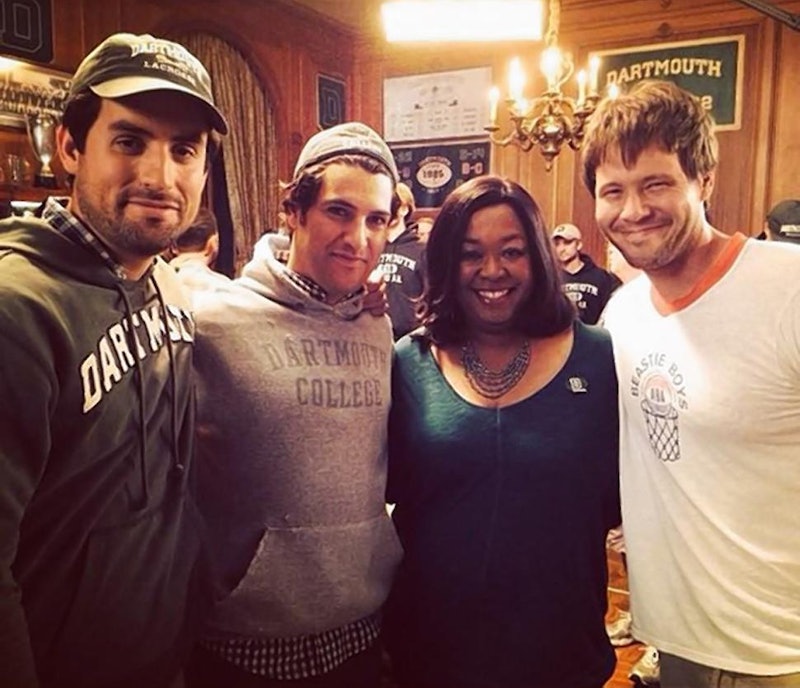 When The Mindy Project actor/writer Ike Barinholtz (who both portrays ex-con nurse Morgan Tookers in front of the camera and acts as the show's executive story editor behind it) tweeted a picture of himself and co-stars Adam Pally and Ed Weeks posing with über-producer and Mindy Project guest star Shonda Rhimes, there were a million mysteries that needed solving. Was the cast of Mindy going to be guest starring on an episode of Scandal? Was Rhimes going to pen an episode of Mindy? Why does it look like they're all in a Dartmouth frat house? These are just a few of the questions that spun through my exploding mind as two of my pop culture obsessions collided.

As we now know, the reason Rhimes is posing with the Mindy boys has nothing to do with her talents as writer/producer. Instead, the behind-the-scenes powerhouse was filming her acting debut on the Fox comedy. This beyond-exciting news was first dropped when Rhimes tweeted the news back in August, and I've been waiting (im)patiently for her onscreen debut ever since. But what is it about a workplace sitcom on a competing network that drew Rhimes to try her hand at acting? The woman behind ABC's TGIT and the woman behind Mindy share an alma mater... one that will be crucial to the plot of Rhimes' episode.

Kaling and Rhimes both graduated from Dartmouth College in New Hampshire a decade apart (the former in 2001, the latter in 1991). Apparently The Big Green served as icebreaker between the two powerful TV writers, as Kaling personally recruited Rhimes to appear this week's episode, titled "The Devil Wears Lands' End," which is centered around a beer pong tournament at their alma mater.

In "Devil," Rhimes will appear as a fictional version of herself, a Dartmouth alum who is the reigning beer pong champion of the school. Obviously, Jeremy and Peter will have to bring their A-Game if they hope to bring down the mighty Shonda Rhimes.

I can only hope that Rhimes' guest stint on Mindy becomes a recurring one, because I'm curious to see what other hidden talents Kaling can tease out of her fellow alum. Acting, beer pong... What's next, keg stands? (Yes, please.)