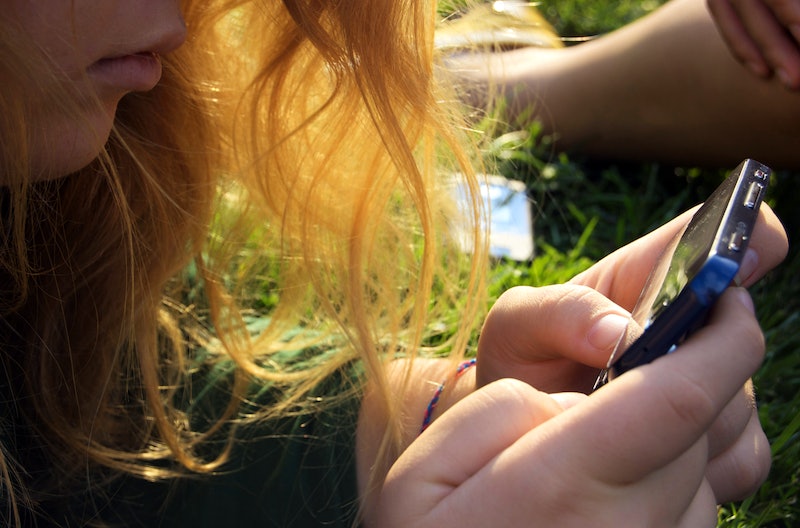 New research from the journal Pediatrics suggests that teen sexting may lead to earlier sex, although the issue is far from black and white. The study, conducted by Jeff Temple from the University of Texas Medical Branch, surveyed around 1,000 Texas high school sophomores and juniors over the course of six years. Based on student feedback, Temple concluded that "those who sexted as sophomores were 32 percent more likely to have had sex in the following year than those who did not." He noted, however, that there was a distinction between those asking for, receiving, and actively sending these messages.

Those who received sexts saw little to no increased risk for having sex at an early age, whereas those who asked for sexts were 10 times more likely to do so. Above all, students who actively sent sexts were the most likely to have intercourse the following year. For each of these cases, however, Temple saw no elevated health risk when it came to the students' sexual behavior. Examples of "risky" sexual behavior included "unprotected sex, having multiple sexual partners, or using alcohol or drugs before sex." Of course, it's important to note that the data was self-reported and therefore might not be entirely reliable, but national surveys confirm the rates of sexting and sexual intercourse among teens.

If this data is reinforced by other studies, and Temple suspects it will be, it would then appear that sexting at a younger age isn't particularly risky. Temple tells TIME that it might even be something that most teenagers consider, and therefore should be something to study:

Sexting may be becoming part of sexual development, and therefore it involves a cross section of all adolescents.

Rather than being "limited to just at-risk individuals," therefore, Temple implies that sexting, like sex itself, is a part of growing up. More importantly, however, sexting could serve as a way to know that a teenager is considering sex before the deed has been done. Temple tells TIME:

If sexting does predate sex, then it’s of public health importance. It becomes a marker of sexual activity and it could be a good opportunity to talk to them about safe sex prior to them having sex and preventing early sexual debut and risky sexual behavior.

With nearly 40 percent of teenagers having posted or sent sexually suggestive messages, however, it's important to update sexual education to reflect sexting as well. Oftentimes, the desire to sext among teens stems from insecurity or peer pressure, so it's important to teach kids to say "no" if they feel they're being pressured into sending these kinds of messages. It also happens to be illegal in many states to take, send, or forward nude photos of a minor, including yourself. As such, teens should be made aware of the potential legal ramifications of their actions.

There are also serious emotional and social consequences of sexting that we need to be highlighting in sex education. Many teenagers fail to consider the damaging effects that sexting can have if their information or photos are somehow made public. If the recent celebrity nude photo leak has taught us anything, it's that nothing is private.

In essence, parents and schools should approach teen sexting very much like teen sex. Kids are about as likely to be dissuaded from sexting as they would be from having sexual intercourse, so it's important that they are informed about how to sext safely, even if teen sexting doesn't lead to risky sexual behavior. This means teaching teenagers to fully consider the consequences of their actions, resist peer pressure, and avoid potentially illegal situations. It means having open dialogue with them about how to explore their sexuality without feeling forced to go beyond their comfort zone. Most importantly, it means giving them the tools to make mature decisions both in-person and behind the comfort of their cell phone.