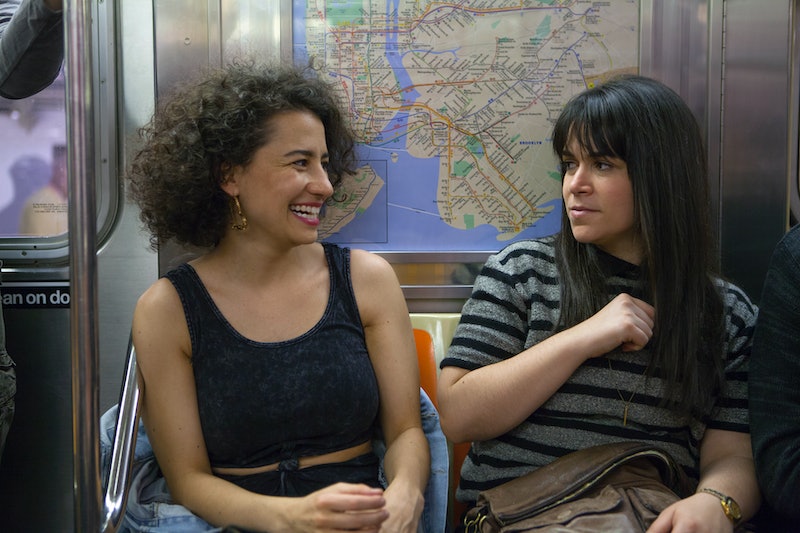 I must admit, I was powerless against the charms of Broad City. The comedy stylings of Broad City creators Abbi Jacobson and Ilana Glazer captured me almost immediately — who could resist two women wearing stolen fur coats, drinking stolen booze, and lamenting missing out on Lil' Wayne after cleaning a Craigslist weirdo's apartment in their underwear? Heading into Broad City Season 2, which begins in January, I'm even more thrilled to see how this duo can top a season so funny that I still laugh hard enough to burst a vein in my head on the third viewing. I'm not, however, down with the way the show is so often carelessly dumped into the "Girls on TV" category. Broad City is so much more, but when I spoke to Jacobson and Glazer at New York Comic Con, they put the whole thing into perspective.

"I don’t know what other show I’d rather be compared to," Jacobson says, referring to the way fans and the media have lumped Broad City into the same bucket as Lena Dunham's Girls simply because they are both half-hour comedies dealing with twentysomething women in New York.

"It’s an honor to be compared to Lena and her show because she is a literal genius and her show is great and she’s such a good writer and actor," adds Glazer. "I see why people compare the thumbnail icons of, like, clicking on the show because we’re both young women, but I see them as different shows ... In one way, it’s an honor and a grand thing, and in another way, it’s minimizing and dismissive."

It's pretty clear where the minimization comes in. You could count all the things Girls and Broad City have in common — even down to the brutal honesty aspect — but those comparisons only hold up on paper. Plus, they assume that these women only have one possible set of experiences and perspective to draw from. But when you actually watch both shows, lo and behold, it becomes apparent that twentysomething women in New York are capable of telling different stories from different perspectives with different voices and nuances. (It's a shame that needs to be said, but here we are.) Funny how that rarely happens to say, the guys at Workaholics and the folks behind It's Always Sunny, though, on paper, both shows are workplace comedies about highly dysfunctional people. But they're different, fans would fiercely argue. Yes, well so are these supposed "girl shows."

"It’s kind of like when you look back at art history, and you’d be, like, 'Oh, famous portrait painters are all the same because they’re all doing, like, silhouettes or whatever,'" says Jacobson. "If you look at two different painters their content is all cityscapes, but they look completely different from each other when you look at both paintings, you can clearly recognize the differences and the styles and tone. And I think that’s like Girls and our show."

In fact, Jacobson and Glazer both say their show is more akin to Seinfeld or Curb Your Enthusiasm: "It’s like these New York Jews who are over shit and have no patience, like, that [comparison] makes sense to me," says Glazer. That comparison does actually make a lot of sense, even from a structural perspective. There are small threads of narrative that continue throughout Broad City, but ultimately, it operates in the vein of Seinfeld: Here's this world and these insane people and this is how they react in various insane situations that have very little to do with each other.

And while I could continue running down a list of all the ways Broad City is not Girls, I might actually run out of space on the Internet. Luckily, we may be nearing a time where we won't have to shout our objections to the unfair comparisons from the rooftops. Maybe, just maybe, people are starting to slowly get it. And even if they aren't, Glazer and Jacobson aren't slowing down to wait for them.

"I think when shows by women were first starting to get picked up, it was, like, 'The Wave of Women on TV!' But as they last now, I feel like just lasting, not paying attention to it, and making the best show you can is the way to counteract that sort of prejudice and outlook," says Glazer.