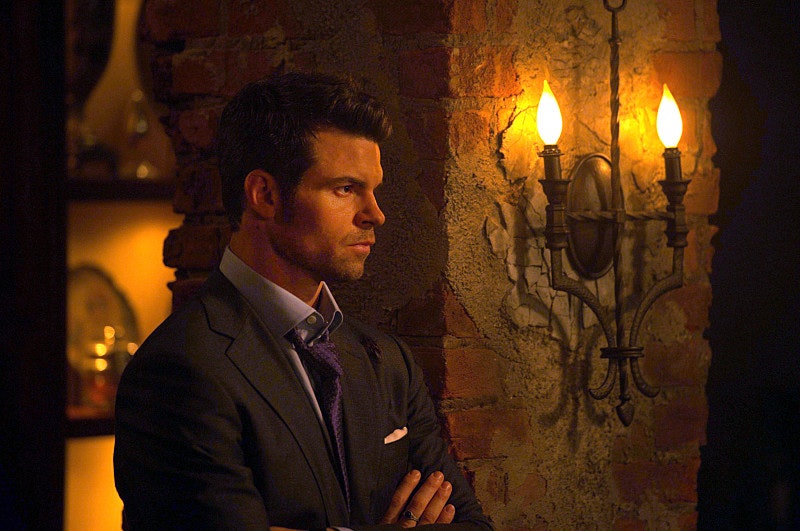 Can someone pinch me or drain me or make me some chamomile tea? Because this can't really be the reason why The Originals would sink it's only real love story. The Originals Season 2 premiere introduced the idea that Haylijah could have a future if Hayley could tame her demons and Elijah wouldn't take it personally that she needed Klaus' help. But, unfortunately, it seems like Haylijah might go the way of TVD's Stelena because on Monday night's new episode, "Alive & Kicking," Elijah's flashbacks revealed that Haylijah will end for Klaus. And Elijah's reason for pushing Hayley away is epically misguided.

Elijah's noble mission to rediscover Klaus' compassion has always struck a chord with me. He could have a life and yet he chooses to spend it following Klaus around, cleaning up his messes, and desperately trying to find his soul. And on Monday night, Originals fans saw exactly what kind of toll being Klaus' older brother and biggest supporter has taken on Elijah — he alienates himself for Klaus' benefit. Through a series of flashbacks to Marcel's childhood with the Mikaelson brothers, Elijah revealed a poignant detail about the Original vampire's past that brings his actions with Hayley's recovery into sharp focus.

Way back when Marcel was still a boy and was living at the Mikaelson compound, Elijah struck up a relationship with him in an attempt to educate and better Marcel as a person. He taught him to read, to recite Shakespeare, and to play piano — all of which lessons infuriated Klaus who became jealous and spiteful as Elijah and Marcel got closer. At first I thought these flashbacks were a device for fans to learn more about Kol's past with his brothers, but that wasn't the case at all. Klaus brought Kol back from "sleeping" (aka being daggered) because he felt "alone" and because he was jealous of Marcel spending time with Elijah.

But eventually, when Kol overstepped his boundaries one too many times, Klaus daggered him again as he endangered Marcel's life. At which point, Elijah realized that Marcel's existence was the strongest tie to redeeming Klaus, so he could no longer jeopardize that. In a crushing and sad moment, Elijah snubbed Marcel to benefit Klaus and his quest to find Klaus' compassion. And, here we are back in present-day New Orleans, where Elijah snubbed Hayley on Monday night because he could tell that Klaus was relishing in their bond.

I can understand making sacrifices for your sibling, but doesn't Elijah deserve happiness too? And what about Hayley? She looked at Elijah the same way young Marcel did when the Original brother snubbed her — Hayley loves Elijah even if she's being consumed by her darkness right now. Snubbing her, while it might benefit Klaus slightly, won't do anything to help her get through the grief and the pain she's dealing with. At some point, Elijah has to stop doing everything for Klaus and start doing something for himself and, now, for Hayley. Some things are more important that continuously trying to save your vindictive brother, especially because I'm not convinced that Klaus even wants Hayley in the first place.