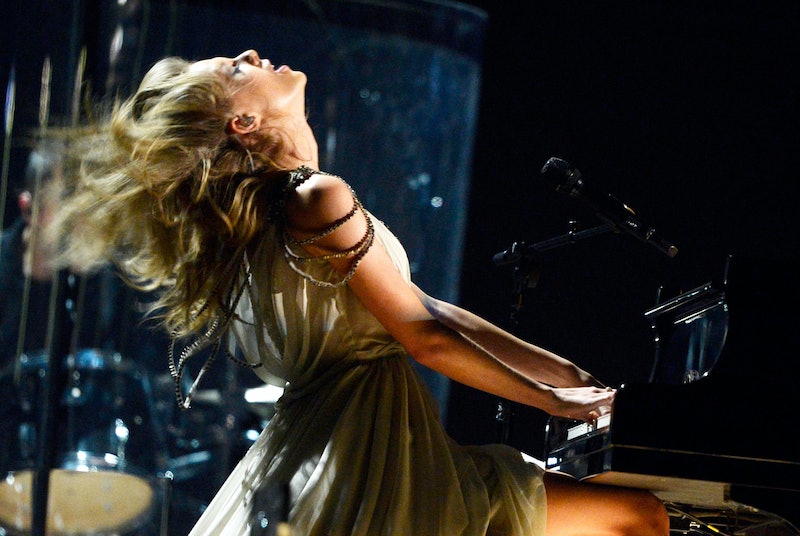 It's been an exciting 24 hours for Tay Tay. Among the John Cleese cat drama, Taylor Swift debuted a preview of her new song "Out of the Woods" on Good Morning America. While we only got a little taste of the song, it's mired in intrigue because as co-writer Jack Antonoff alleged in Swift's Rolling Stone profile, it may be about her relationship with Harry Styles.

So when I learned Monday morning that "Out of the Woods" isn't a takedown of Styles' weirdo implication that only women with low self-image have inherent beauty and that instead, the song sounds like another Swift celebrity ex-boyfriend redux, I momentarily wondered if the song signals the death of Single Feminist Taylor Swift.

The thing is, I love Single Feminist Taylor Swift. I love that one day she just got a lob, got a new cat, got some high-waisted shorts, clearly spent some time on Tumblr, and became sassy and self-aware. She's suddenly super supportive of her peers, lauding Emma Watson as a feminist inspiration. In a recent interview, Swift stated that she "cheers on anybody who is living their life on their own terms and wearing what they want to wear and representing what they want to represent. I think that no other female artist should be able to tell me to wear less clothes and I'm not gonna tell any other female artist to wear more clothes." Boo yah.

Single Feminist Taylor Swift is my (and Lorde's, and Emma Stone's, Karlie Kloss', and Lena Dunham's) BFF, and I'm hoping to hear these newfound girl power vibes on her upcoming album, but what I'm getting so far from the lyrics of "Out of the Woods" is that "the rest of the world was black and white" and Swift and the man in question were "in color." Then the chorus, it seems, is Swift's anxious hopes that they'll be "out of the woods." (Get it? Like the name of the song?) The tidbit released Monday morning is only half a minute long, but as far as I can tell, Helen Reddy's "I Am Woman," it is not.

That said, "Shake It Off" kinda-sorta has that element of self-empowerment, which is important in itself, and it's an infectious pop song independently. But based on the first two tunes off 1989, Single Feminist Taylor Swift hasn't totally displayed her New Single Feminist Ways in song, or at least, retired from her boyfriend lament.

But even if all the other songs on her album end up romantic rehashes of everyone from Taylor Lautner to Jake Gyllenhaal, that's OK. I don't realistically expect Swift to turn into Kathleen Hanna overnight, nor would I want that. Being in love does not make you a "bad feminist," and writing about it is an important catharsis that can turn into creative gold. And while the subject matter makes me side-eye for a minute, that's mostly because it resurrects memories of Teenage Taylor Swift, who was decidedly country, lyrically bankrupt, and super slut-shamey (remember the days of "she's better known for what she does on the mattress?").

I have faith, though, that 1989 will show me she's overall growing to be the fun, feminist gal pal I've always wanted.

More like this
Taylor Swift Wants To Direct A Movie Next — But You Might Have To Wait
By Radhika Menon
Everything To Know About Taylor Swift’s 10th Studio Album, 'Midnights'
By Grace Wehniainen and Jake Viswanath
What Demi Lovato Really Thinks About Child Stardom, Depression, & Sobriety
By Radhika Menon
Kanye West Apologizes To Kim K "For Any Stress I Have Caused" In Rare Interview
By Jake Viswanath
Get Even More From Bustle — Sign Up For The Newsletter