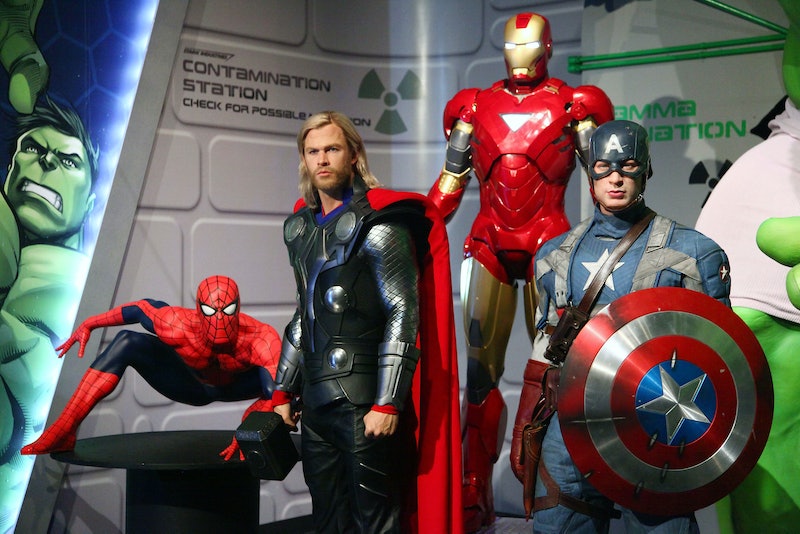 If you're a fan of any Marvel product — Captain America, Iron Man, The Avengers, even Agents of S.H.I.E.L.D — then you're in for some big changes ahead. Robert Downey Jr. has joined the cast of Captain America 3 , and that means more than just a casting announcement. It means that Marvel is adapting the Civil War arc from the comics to the big screen.

"What is the Civil War," you ask? The Civil War starts with the passage of the Superhero Registration Act, which requires all superheroes to reveal their true identities, register with the government, and to serve under regulation as sort of police officers with superpowers. This legislation splits the entire superhero community, with the opposing sides headed up by Captain America and Iron Man, who are respectively anti- and pro-registration.

How faithful the movie adaptation will be remains to be seen. With Iron Man appearing in Captain America 3, Variety writes that this will cast him in the role of the villain. But the comic book arc is much larger, involving many recognizable superheroes. Spoilers ahead. Spider-man himself plays an essential part of the fight, first outing his identity and joining the pro-registration side, then becoming anti-registration once he learns that superheroes who refuse to register will be imprisoned.

And of course, as with any war, the ultimate question is: Who is on the winning side? But the answer in the case of Marvel's Civil War may not be big-screen friendly. During the climactic fight with Iron Man, Captain America is held back by non-superhero emergency personnel before he's able to finish off Tony Stark. Wishing to cause no further bloodshed, he surrenders. Tony Stark was appointed director of S.H.I.E.L.D. while the anti-registration forces either fled to Canada, went underground, or registered and received amnesty from the government. The end of the war is marked by Captain America being shot and killed by Crossbones and Sharon Carter (who was under hypnosis). So, it's safe to say that Iron Man and the pro-registration forces win this fight.

A pretty heavy ending, especially for a Disney franchise. Marvel's Civil War may be an exciting development for Marvel properties, but it's hard to believe that the adaptation will stay true to the original ending. Having the hero Captain America 3 not only fail in his initiative, but die, as well, is uncharacteristically dark for the Marvel Entertainment franchise. So the question of who wins Marvel's Civil War brings up yet another question: How will the Civil War be adapted? Will it be just a one-movie tiff between Iron Man and Captain America, or will it be a franchise-wide issue that creates serious consequences in the Marvel Universe?

More like this
Everything You Need To Know About The 'Knives Out' Sequel
By Grace Wehniainen
The 'Hocus Pocus' Sequel Finally Has A Release Date & It Makes Total Sense
By Shannon Barbour and Radhika Menon
Everything To Know About 'The Hunger Games' Prequel Movie
By Grace Wehniainen and Radhika Menon
Is Austin Butler Really Singing in 'Elvis'?
By Arya Roshanian
Get Even More From Bustle — Sign Up For The Newsletter