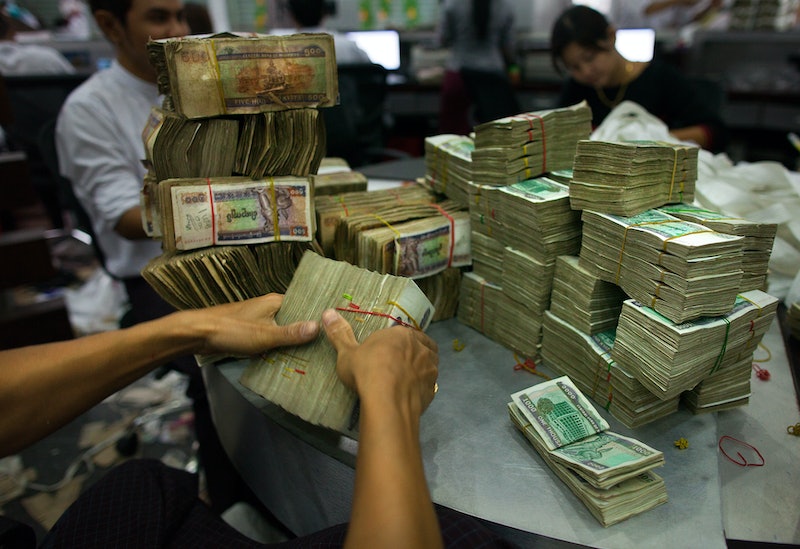 The focal point of global wealth is growing increasingly smaller over time. According to Credit Suisse's annual Global Wealth Report, the wealthiest 1 percent of the world owns 48.2 percent of global assets. That would be the equivalent of the combined populations of just three American states, Texas, California and New York, holding the purse strings of the entire earth. And to be part of the 1 percent, you need about $798,000, a reasonable sum for many white-collar Americans. Time has done nothing to erase the burdens of inequality. If anything, it has only magnified it.

Over the last 14 years, the report claims, the total amount of wealth across the globe has more than doubled, increasing from $117 trillion in 2000 to $262 trillion today. But this wealth has not been evenly distributed — rather, the the Credit Suisse report further substantiates January's Oxfam research that found that the world's richest 85 individuals had the same amount of money as the poorest 3.5 billion people combined. Emma Seery, Oxfam’s head of inequality, told the Guardian,

[Credit Suisse's] figures give more evidence that equality is extreme and growing, and that economic recovery following the financial crisis has been skewed in favor of the wealthiest.

How extreme is the inequality?

Think of it this way — according to these latest numbers, you need only $3,650 to be richer than half of the world's population. If you were making Seattle's minimum wage of $15 an hour, it would take you one month of 8-hour workdays to make that sum.

If you have $77,000, you can count yourself in the top 10 percent of global earners. In 2010, the median wealth of American families was $77,300. Today, that figure is considerably lower, with the median income of the typical American family standing at $45,000. But even within the United States, the income gap is growing, as the average American makes $301,000 a year. Why is the average nearly seven times greater than the median? Because America claims 42 percent of the world's millionaires, and 49 percent of people worth over $50 million. Even in the United States, the middle class is disappearing, and is slowly being replaced by a vast schism between the haves and the have-nots.

And this is a global trend. While the wealthiest 1 percent own half of the world, half of the world's population owns less than 1 percent of the wealth. 3.6 billion people are sharing just one one hundredth of what the world has overall. That would suggest that each of these people have around $727 in their pockets. That is around the price of an iPhone 6.

90 percent of the more than 3 billion people who have less than $10,000 in total assets live in developing countries. But interestingly enough, 15 percent of millionaires also hail from developing nations, highlighting the vast wealth inequalities in countries like India and China, which are home to some of both the richest and poorest people in the world.

This ever burgeoning gap shows little signs of showing, particularly considering that many of these inequalities are systemic and embedded in our transfer of wealth. That is to say that these huge discrepancies have little to do with how hard you've worked, and a lot more to do with where you were born and what you inherited. According to the report, history and land ownership are the two biggest factors to consider when determining your potential spending power:

This has been the case throughout most of human history, with wealth ownership often equating with land holdings, and wealth more often acquired via inheritance or conquest rather than talent or work.

The effects of the 2008 financial crisis

The financial crisis of 2008 has only served to heighten the tensions between the richest and the poorest. While the global markets felt the sting of the crash, the wealthy have recovered and are now performing better than ever, and it is the poorest half of the global population that is bearing the brunt of the economic impacts. Credit Suisse Research Institute’s Markus Stierli told the Independent that in years prior to 2008, "most countries were showing a flat or declining trend" in terms of wealth inequality. But in the years since the crisis, inequality has been on the rise, and this year, the gap is larger than ever.

Seery noted, "This report shows that those least able to afford it have paid the price of the financial crisis whilst more wealth has flooded into the coffers of the richest." And this is becoming increasingly problematic as issues of health and education become more striated amongst income lines. Ebola, for example, while dangerous on a global level, has also taken the hardest toll on West African nations where a lack of proper sanitation, infrastructure and education have exacerbated the lethality of the disease. As Seery told the Guardian,

In poor countries, rising inequality means the difference between children getting the chance to go to school and sick people getting life-saving medicines.

more than just a question of money

This wealth inequality manifests itself in more ways than one — when it comes to Internet access, a staggering 60 percent of the world's population can't get online, according to a McKinsey & Company report. And the vast majority of these Internet-less individuals are rural, low income, elderly, illiterate, and female. While we may use the Internet for little more than checking Facebook or browsing YouTube, the report notes,

Those who do not or simply cannot go online increasingly suffer from constrained prospects for economic attainment, class mobility, education, and other areas related to quality of life. The voices, ideas, and contributions of the offline population can't be heard and often can't be made until they're connected.

Even as we plunge forward in our technologically advanced, increasingly wealthy world, there remains an insidious trend of vast inequity that has yet to be addressed. And when $3,650 is all you need to be outdoing half of your global peers, something needs to be changed.