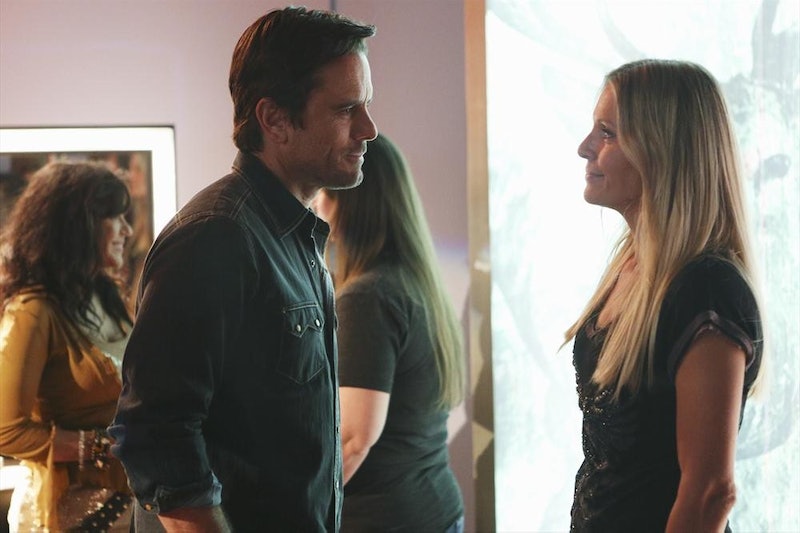 There's never a dull moment on Nashville, though lately Deacon Claybourne has been a bit of a mope. He may be grumpy about being dragged on tour with his one true love's fiancé (for now) Luke, but there appears to be an incentive by way of backup singer Pam York. Has Deacon found his new rebound or his new muse? Pam is definitely into him. She followed him around like a puppy and didn't lose interest when he told her that he's in love with Rayna Jaymes. Like, I get it girl! But you're coming on really strong on a very soapy show, so it's a little suspicious. Who is Pam and what exactly is her deal?

We already saw one Juliette Barnes fanatic go after Avery. Was this some kind of foreshadowing? Nashville loves a parallel storyline. As much as Deacon can be a pain, I don't want to see him hurt like this. Then again, Deacon caught up on his Rayna articles while Pam was still in bed with him. Maybe they're perfect for each other. The official press releases for the upcoming couple of episodes reveal that "an assertive and sultry backup singer takes a liking to Deacon but his down in the dumps attitude does nothing but shut her out." Well, we already knew as much. Hopefully Pam isn't too much of a broken record. In coming weeks, ABC claims that Pam is going to help Deacon "find his purpose in music."

It would be nice to see that old "Yoko Ono" trope be turned on its head and used for good. Even if Deacon and Rayna are destined to be together, he could always do with a little soul searching. I really just hope Pam isn't labelled as "crazy." This season is already off to a bad start when it comes to how women operate. I would like to think that there is a reason Pam is pursuing Deacon so intently that doesn't turn her into an overused TV stereotype.

My theory is that Luke knows Pam and is trying to subtly set them up so that Deacon will move on and get off his back. Pam is on Luke's tour too, after all. This is sure to have some repercussions if Rayna ever finds out. Which, because she's smart and this is a television show, she will. As much as I like the stability that is Luke and Rayna (I know, I know, I'm in the minority here), all this wedding pressure has Luke on thin ice. If she found out that Luke was scheming, that might break it.

Still, Pam seemed so personable with Deacon. Could she just be someone who aggressively goes after what (or who) she wants? I definitely support that and hope it's the case, but on a television show, it raises eyebrows. Does Pam know Deacon from somewhere? Is she trying to sell him a song or ride his coattails into fame? What's the country music version of coattails, spurs? Bolo ties? Whatever it is, Pam York might be out for them.