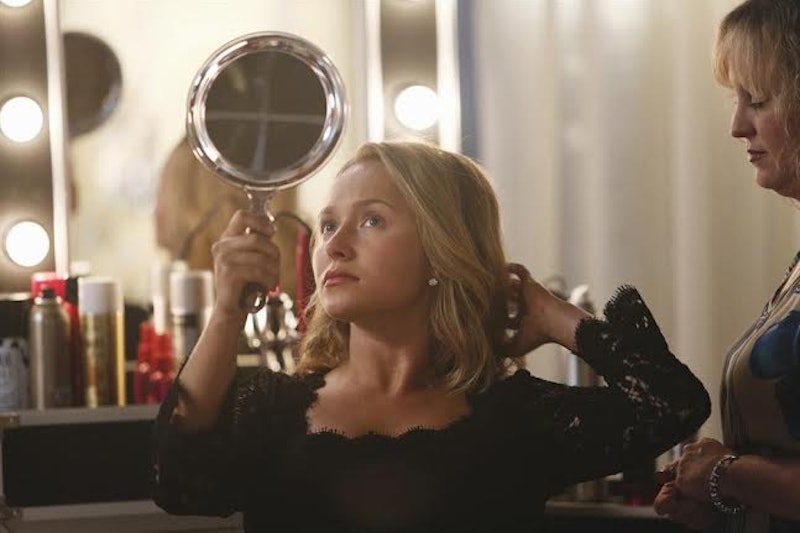 Well, that's one way to unveil a pregnancy, I guess. A lot of reveals came to light during Nashville 's Season 3 premiere — one of them involved the whole Rayna-Luke-Deacon dynamic, while the other focused on the big reveal of Juliette's pregnancy. And while we all knew Hayden Panettiere's real life baby bump would become part of her Nashville story arc, I don't think any of us were prepared for the way the series chose to have her portray those hormonal symptoms. Not only did she run around her place desperately looking for a pair of scissors (which she would then use moments later to brutally butcher her hair), but she also suffered a complete breakdown in front of Avery, begging for him to take her back.

Basically… Juliette came across as a hysterical wreck for the entire hour, which culminated in the big reveal that she's with child. So I guess in Nashville's eyes, pregnant equals crazy? That seems like a bit of a stretch. Granted, Juliette is going through a tough time emotionally due to her recent cheating scandal and the fallout its had with Avery, but to insinuate that her emotional state is derived from her pregnancy — as thought her craziness was supposed to be some sort of hint to the audience that she's expecting — feels downright inaccurate and an unfair representation. I mean, I've never been pregnant, but several of my friends have and, believe me, none of them took a pair of scissors to their hair in the midst of a nonsensically hysterical "pregnancy spell."

The nausea hint, I could handle, but all of the hysterics came across as completely out of character. Sure, she's no stranger to be sad or mad, but there was always an explanation behind it (like the death of her mother), and even then it was never really quite to this degree. In fact, I've always found Juliette to be a strong (albeit stubborn) woman. So to see her fall apart so drastically like this (and over what? a potential break-up? an audition?) was simply something I wasn't expecting and it's a patently unfair representation of someone who is expecting. So please, Nashville, bring back that strong and vibrant sass we've grown to love.