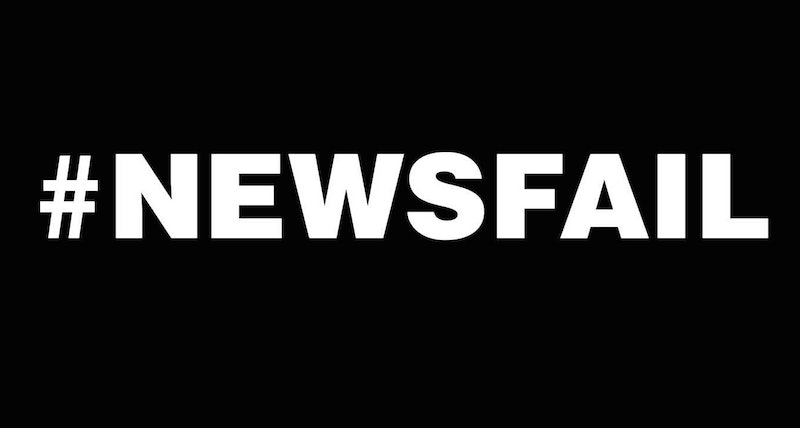 Anyone with a TV or an Internet connection knows that the news' coverage of, well, news is constantly dissected. The sensationalism, the "unbiased reporting," and the sheer disregard for real issues in the name of fear-mongering for ratings — it's all very real and a big issue. People know this and sometimes even make noise about it, yet coverage continues to be partisan, skewed, and sometimes just wrong.

#NEWSFAIL: Climate Change, Feminism, Gun Control, and Other Fun Stuff We Talk About Because Nobody Else Will (Simon & Schuster) is trying to change all that. The book, from Citizen Radio co-founders Jamie Kilstein and Allison Kilkenny, is one hell of a feisty, intelligent, and uncompromising read. This particular hybrid of memoir and truth-telling will make you rethink not only where you get your news, but how you get it, and what really matters when it comes to discussing the subjects humans should find vital to our existence.

Discussions of the book's big, hot-button issues — feminism, gun control, climate change — all point to one big theme: the United States' major news outlets are seriously flawed. Stories will go unreported or facts eschewed for the sole purpose of making sure sponsors are happy and tow higher ups' particular political agendas. For example: We saw this kind of thing happen in 2003 when Phil Donahue was fired by MSNBC in for his criticism of the Iraq war. An internal memo from the network obtained by the New York Times revealed that "Donahue represents a difficult public face for NBC in a time of war." That's pretty problematic, no?

We need to find a better way to discuss and inspire action in regards to these issues. #NEWSFAIL does it — and this is how:

It Talks About the Hard Stuff

Bodily autonomy, equal rights, gun control, health care, climate change — these are all subjects that can muster up a lot of rage with their narratives, especially when they're told without fair debate and discussion. That's how a lot of news happens: in a black and white manner. But life isn't black and white.

Why can't we talk with numbers and facts? Why must everything come from a two-sided storyline, where numbers, theories, and thoughts are eschewed in the name of towing a particular line or narrative? Spoiler alert: We can talk with facts and figures without party lines. Kilstein and Kilkenny break down the arguments made by the left and the right and provide facts from researchers and discuss why sometimes we don't get that from our so-called respected news sources.

It Goes Deep and Gets Nuanced

Kilkenny and Kilstein do what many major stations simply don't — they have an ability to convey nuance and dig deep about the big issues. They even do make their points with humor — proving not only that adult conversations can be had about these topics, but that they're not all hard to have. (Their discussion of our health system's ingrained failure and the downside of journalism as disaster tourism revolves around a stuffed penguin named Wobbles. Just go read the book, trust me.)

So why do so many media outlets stay so big-picture, dumbing down the storyline? There are myriad reasons: because they're afraid; because it's hard to be nuanced when you have three minutes to tell a story; because advertisers have way more sway than anyone realizes; because the major outlets often ask their writers to work for free and/or "exposure"; because some of the higher-ups might even think you're stupid.

It Shows That Sometimes, the Impossible is Possible

Part memoir regarding the creation of Citizen Radio — the duo's uncensored, low-budget podcast radio program — #NEWSFAIL proves that if you work hard enough, you, too, can create something that's successful outside of those organizations with pesky corporate sponsors and advertising dollars. No small feat, to say the least!

It Will Make You Think

If you're reading Bustle, you're likely a feminist, and therefore quite intelligent and not in need of a "Here's why feminism is the best!" talk. With topics ranging from why we should all be vegan — and yes, the authors are aware bacon exists — for the good of the climate and animals, the necessity of ending the war on drugs because it's actually killing the country, to why our mental health care and gun control go hand-in-hand, #NEWSFAIL will at least make you rethink how you operate out in the world.

Whether you change you mind and/or behaviors after reading, naturally, is up to you. But if Kilstein and Kilkenny can make this particular VERY EMPHATIC cheesemonger-type even contemplate a life without dairy for the sake of animal welfare, you'll likely find something striking in the multitudes of their engaging arguments.

It'll Rev You Up

Is the book a solution-filled sorta tome? Does it have all the answers to fixing the problems with modern media, or consider the fact that independent media is just as susceptible to these pratfalls? No, but it does pinpoint exactly what is wrong — and why it's wrong — about how we in the media talk about certain issues. It makes you take a good, long, hard look at what and how you ingest the news and form your opinions.

#NEWSFAIL is an ignitor. It asks questions and isn't afraid to name names responsible for skewing coverage — and it's not just FOX News! The Huffington Post, MSNBC, CNN, NBC, CBS, and ABC all get called out — What you do with that knowledge after you're done? It's up to you — as it should be.