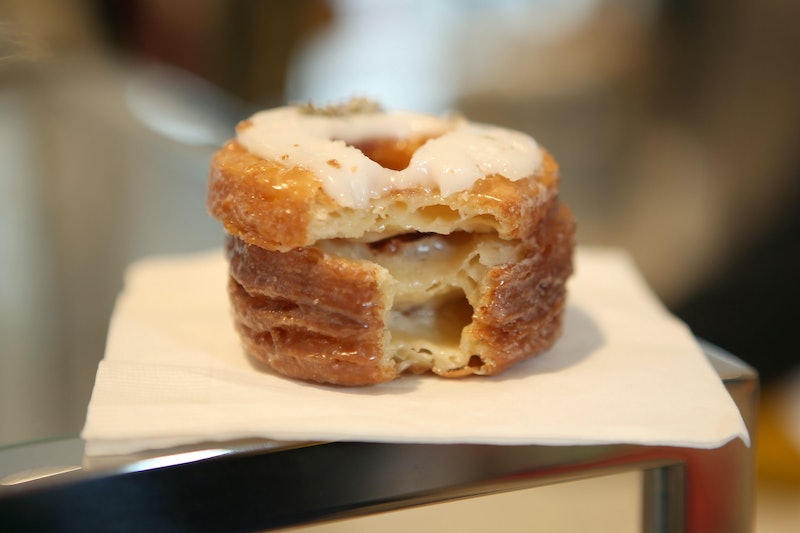 If you haven't already heard, the official cronut recipe by Dominique Ansel is out, just waiting for you to try it. That's right. Ansel, whose hybrid dream dessert had New Yorkers in a frenzy when it first took the food world by storm last summer, finally released the recipe while promoting his cookbook, Dominique Ansel: The Secret Recipes. Forget waiting for hours in line to get your hands on this flaky, cream-filled amazingness. Just preheat the oven and get ready to rumble.

Well, not quite. Before you jump out of line at the cronut shop to go throw on your apron, I feel the need to warn you that the recipe calls for some serious equipment, a few strange ingredients, and takes three days to make. Seriously — three days!

I knew it was going to be a challenge, but I was still eager to see if I had what it took to master this incredible pastry. Luckily, I wasn't alone. My two roommates are not only great bakers, they are also passionate donut-lovers who willingly joined me on this adventure. And it's a good thing they did, because I quickly learned that this recipe is definitely a team effort — some steps even require more than two hands.

After we gathered all the necessary tools and ingredients, we fired up the stove to see if these homemade cronuts tasted just as good or maybe, just maybe, better than Ansel's. I've only tried cronuts once before, but it was enough to make me want a whole batch more. That said, here are the chronicles of three girls who spent three days making 13 cronuts, and what we learned in the process. Allow me to break it down for you... or at least, try. (Seriously, you might want to settle in for this — it's a doozy.)

Day One — Make the filling, prepare the dough

We began by making everyone’s favorite part of a cronut — the ganache. Ansel's recipe comes with three options to choose from: vanilla rose, whipped lemon, and champagne-chocolate. We went with champagne-chocolate, because what girl doesn’t love champagne and chocolate? Here's what we needed:

To start, you need two bowls and a pot. In the first bowl, we mixed water, two tablespoons of champagne, and cocoa powder. In the second, we whisked the egg yolks and granulated sugar together. Then, we combined heavy cream and the remaining 1/4 cup of champagne into a small pot to boil. Once the pot was boiling, we streamed 1/3 of the hot cream mixture into the egg yolks, whisking constantly until everything was fully blended.

Next, we whisked the tempered yolks into the remaining hot cream, returned the pot to medium heat, and kept whisking. This is where your third hand comes in. You’ll know the custard is ready when it turns thick and pale yellow. We removed the custard from the heat and, of course, whisked some more, adding in the cocoa powder paste. Then we strained the custard through a small sieve over the chocolate. The sieving took about two minutes, which seemed like forever since our hands were already tired from whisking. When this was finished, we whisked a little more until finally the ganache had the consistency of yogurt.

We reserved 1/4 cups for the glaze, then covered it with plastic wrap pressed directly onto the surface of the ganache to prevent a skin from forming. This had to be refrigerated for the next two days.

We combined the bread flour, salt, sugar, yeast, water, egg whites, butter, and cream in a standing mixer fitted with a dough hook. After about three minutes, the dough was ready. Seems pretty standard, right?

We lightly greased a medium bowl with nonstick cooking spray, transferred the dough to the bowl, and covered it with plastic wrap pressed directly on the surface of the dough. The dough has to be proofed in a warm spot until it doubles in size, so we left it on top of our fridge for two and a half hours.

Once the dough expanded, we removed the plastic wrap and punched down the dough by folding the edges into the center, releasing as much of the gas as possible. (Side note: this is a great time to take out your frustration on the dough, and if there's one thing that comes with making cronuts, it's a healthy amount of frustration).

I drew a 7-inch square on a second piece of parchment paper, and placed a stick of soft butter in the center of the square. Then I spread the butter evenly with a spatula to fill the square, and added it to our already-full refrigerator to cool overnight.

I stood back to admire my work. I had survived day one.

Bright eyed and ready to see where day two would take me, I removed the butter from the refrigerator. It needs to be soft enough to bend without cracking. Then, I removed the dough from the fridge and placed it on the counter, which was already covered in flour. Using the rolling pin, I rolled out the dough to a 10-inch square that was about 1 inch thick, and I arranged the butter block in the center of the dough like a diamond.

My roommate then pulled the corners of the dough up and over to the center of the butter block, and pinched the seams of dough together to seal the butter inside. We added more flour to the surface, and used a rolling pin to evenly roll out the dough from the center.

Once the dough was about 20 inches wide, we folded it in half horizontally and then vertically, ending up with a 10-inch square of dough with four layers. Then, we wrapped it tightly in plastic wrap and refrigerated it for one hour. After an hour, we took it out to repeat the rolling, folding, and wrapping. Then, we left it to refrigerate overnight.

Finally, the day had arrived, and I could almost taste the cronuts in my mouth. I was salivating just thinking about it. Then I realized that day three requires a three-hour waiting process. This whole recipe has made me resent the number three entirely. But we were so close, so we worked fast.

First, we floured our work surface and rolled out the dough to a 15-inch square. Then we transferred the dough to a half sheet pan, covered it with plastic wrap, and waited the first hour for it to relax in the refrigerator.

The cronuts were already starting to take shape, but it seemed the wait would never end. We lined a sheet pan with parchment paper, lightly dusted the parchment with flour, and placed the cronuts on the pan about 3 inches apart. I lightly sprayed a piece of plastic wrap with nonstick spray, laid it on top of the pastries, and let them sit on the stove for 2 hours.

When the timer was up, we heated 24 ounces of grapeseed oil in a large pot to 350 degrees. It’s crucial to keep the oil burning at this temperature the whole time while frying. If it’s too low, the pastries will be greasy; too high, the inside will be undercooked while the outside is burnt. So we used a candy thermometer to verify that the oil was just right.

We lined a platter with a few paper towels for draining the pastries, then fried three cronuts at a time for 75 seconds so that they wouldn’t be too crunchy.

Once all the cronuts were fried and cooled off, we took out our wonderfully aged ganache and whisked it until smooth. To fill the cronuts, we poked four holes into one side, and injected the ganache using a piping bag.

As I injected the ganache, I could feel the pastries getting heavier in my hand. Once filled, we rolled the pastries in granulated sugar, coating the outside edges. Finally, using a rubber spatula, we glazed the top of each pastry, making sure to cover all the holes created from the filling.

At last, our mission was complete, and the cronuts were ready for the having!

I will admit that our at-home cronuts were not nearly as pretty as Ansel’s. They were thinner, a little flakier, and definitely looked like they got the DIY treatment. But the inside was just as soft, and the ganache was so amazing I could eat it by itself. Not to mention we had some leftover champagne to help wash everything down.

I did savor and appreciate my homemade cronuts much more because I understood the work that went into them, but when it’s all said and done, I would much rather wait an hour in line than three days at home. On the plus side, though, you do get more bang for your buck when you try to make these yourself. Considering we had most of the ingredients, I only spent $28 and ended up with 13 cronuts. That's $2.15 per cronut — less than half of what you'll spend at the shop. The down side: you only have eight hours to eat them. If left overnight, they become crunchy and greasy. (This is why Ansel only makes 100 per day.) But don’t worry — we shared.

To get your hands on the official recipe and more, check out Dominique Ansel: The Secret Recipes, out in the U.S.