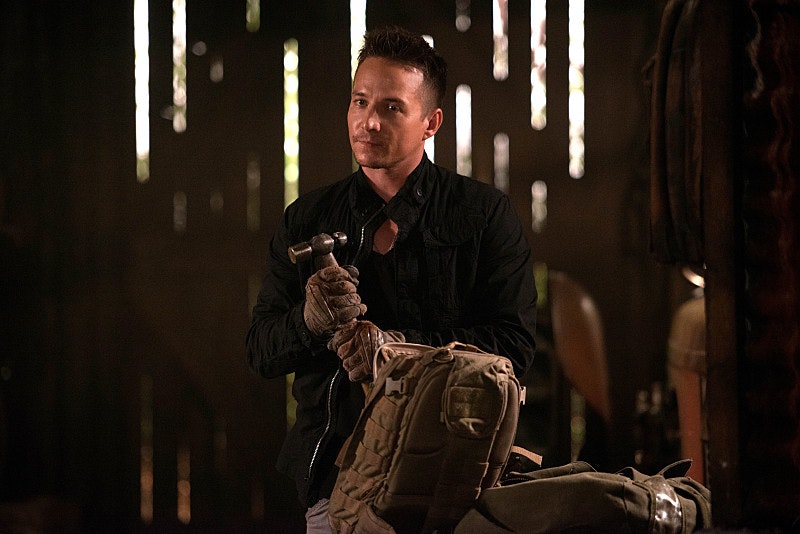 Well that was quick. In Supernatural 's second episode of Season 10, "Reichenbach," Cole's identity was revealed, as was the reason why he was so dead set on killing Dean Winchester. It seems in June of 2003, Dean killed Cole's father Edward Trent and let him live. Since then, for more than a decade, Cole had been preparing for the day where he could finally, finally face Dean again and get revenge for his father's death.

Cole's confrontation with Dean ended with both men's lives intact thanks to Sam overpowering Dean with holy water before Deanmon could really let Cole have it. See, Cole may have been training the better part of his adult life to take revenge on Dean, but he, like many others, did not realize that Dean had turned into a demon. So when the men started fighting, Cole was easily overtaken by Dean despite Cole's best efforts. Cole limped away with his limbs intact, but quite a bit of blood loss. The next and last time we saw him in the episode, he was at a library, bleeding all over a bunch of books and demanding to see all of the literature on demons. Clearly his revenge plan is far from over.

Because Dean was very obviously human and hunting in June of 2003 (in fact, 2003 is before the series even began so we never met this "Edward Trent"), I can only assume that Edward Trent was either possessed by a demon or had turned into some kind of monster that Dean was tasked with hunting. He must have let young Cole live because he realized that Cole was still human and he did not want anymore innocent people to die.

But the confrontation between Cole and Dean overshadowed an important moment in the season so far: the reunion of the brothers Winchester. That's right, Sam and Dean finally saw each other for the first time since Dean died and then turned into a demon. And the reunion was... not so awesome. Dean knew Sam was after him but while the younger Winchester tried to appeal to Deanmon's human side, Dean just laughed and told Sam that it was taking everything in him not to pull a Rick Grimes move and rip out Sam's throat with his teeth. In the end, Sam took Dean back with him in the Impala and gave Crowley the First Blade so that Dean wouldn't have any extra desires to kill. But Dean might be too far gone, as he not only didn't care about his beloved car (a devastating moment for fans), but also threatened Sam with some kind of potential psychological torture. Things are not looking up for the brothers so far this season.