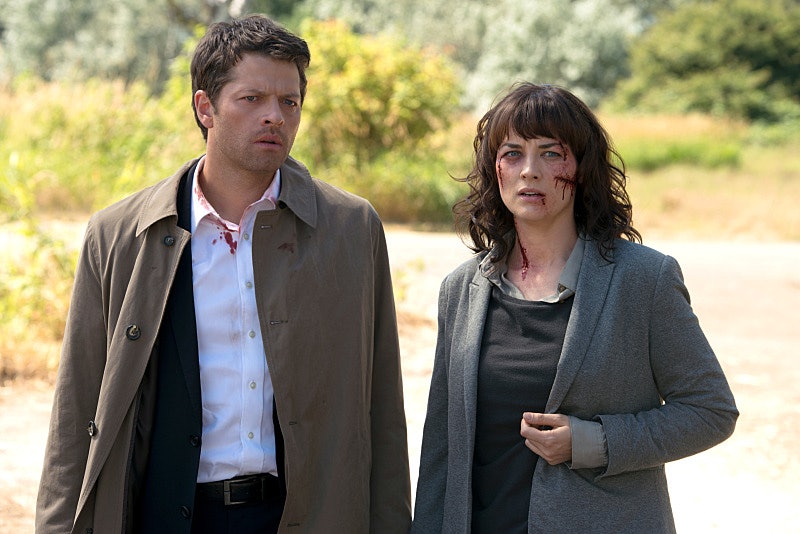 Apparently heaven isn't for everyone on Supernatural . In "Black," the Season 10 premiere (10!) of the hit CW series, Hannah explained to Castiel that the angels were attempting to restart a government in heaven. It'd be a way to make sure that there was order once again among the angels, but not all of them wanted to return to their home. There were a few who were determined to stay on earth, having adapted to this life after the fall at the end of Season 8. The angel Hannah, who seems to be justifiably trying to call the shots a bit, calls upon Castiel to help wrangle these wayward angels and send them back to where they truly belong. And she can't do it alone, because the last time an angel was sent to retrieve the two rogue wings, Daniel and Adina, they killed the angel who was just doing its duty.

Clearly Daniel and Adina are really enjoying their time on earth and see no reason for returning to heaven, as they enjoy being able to make choices and have true freedom. Because if there is one thing we've learned on Supernatural, it's that even angels can live like prisoners. Cas tries to talk everything out with Daniel, who is also not hoping to resort to violence, but Hannah is not having it. She doesn't understand why the two rogue angels would ever want to stay on earth. There's nothing for the angels on Earth in her opinion. But obviously as Cas — who both lived as a human and has human best friends — can attest, there's more to it than Hannah will ever understand.

Castiel continues to try and reason with both sides, telling Hannah that the chaos on Earth isn't a bad thing. From it, you get love, hope, dreams, etc. But Hannah believes that would just make the angels like humans. And what's the point of being human?

This short storyline seems to only just be developing, as it is guaranteed that, despite Castiel and Hannah having to eventually take down Daniel and Adina, there will be others following in their footsteps. Clearly many of the angels learned to adapt to human life after the fall, and maybe some of them even gained the ability to look past their angel-ness to find human emotions and more. Castiel did it, and even though at times this outlook has hurt him, it's also made him a more well-rounded being with the opportunity to see more than meets the eye — unlike a typical angel like Hannah.

I hope this particular conflict for angels continues on the show, especially as Castiel struggles with his loss of grace. It's important to realize that beings outside the realm of humanity struggle just as much as humans on this series. It's what has made characters like Cas and Crowley so intriguing and endearing, regardless of some of their worst actions. Choosing between free will and doing your duty to your own kind is not a storyline from which Supernatural has ever shied away. It'll be interesting to see how it plays out for so many angels now that they're back where they belong. Heaven just may not be cutting it anymore.