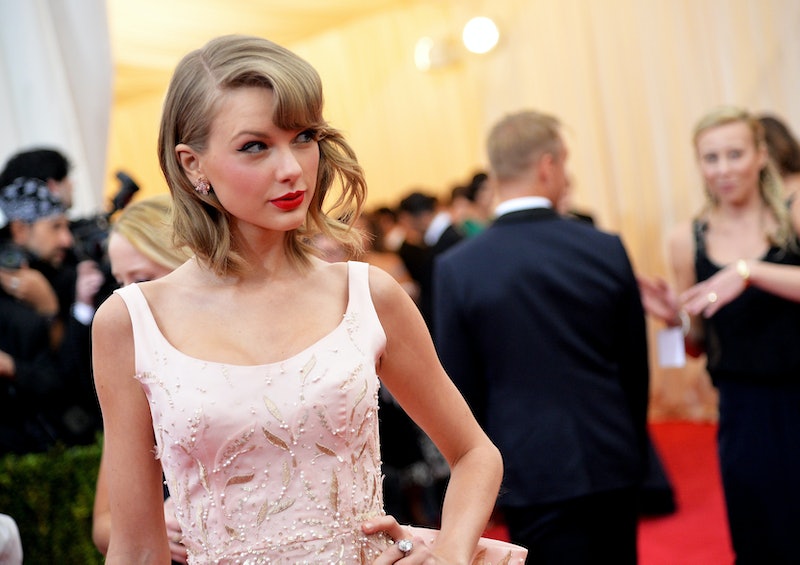 I have been more excited about 1989 than I have about any Taylor Swift album that came before it, an excitement that increased ten fold after the release of her first single "Shake It Off". Yes, the music video for "Shake It Off" might have been problematic, but I was able to appreciate what Swift was doing with it and the song gained far more plays in my iTunes library than I'm comfortable admitting to people. Then Swift released "Out of the Woods" and it was like a chorus of Swift-voiced angels singing in my ear. So, really, it comes as no surprise that the only thing that could dislodge "Shake It Off" from its number one spot on iTunes was the release of a new Swift song. However, now that the dust has settled and we've had a whole day to think, is "Out of the Woods" really worthy of being more popular than "Shake It Off"?

Don't get me wrong. They're both really good songs. In a single day, "Out of the Woods" has reached more repeated plays than I'm comfortable admitting to people. I'm listening to it right now, in fact. But does that make it a better song than "Shake It Off" or am I just enamored by its newness? That's a complicated questions, so let's look at the facts.

"Shake It Off" is more fun.

When you listen to "Shake It Off", by the time the chorus rolls around you are on your feet shaking your body from left to right. You are shaking what your momma gave you. You are practically ready to go to the gym and shake it there, the song is such a pick-me-up. It's certainly one of the most fun songs that Swift has ever done. However...

"Out of the Woods" is more personal.

Although "Out of the Woods" has a beat that's similarly uptempo, it's a much more personal song than "Shake It Off". It's got that ripped from Swift's diary feel to it and references specific events in her life that we might not all be able to relate to. It's her opening up to us again, which gives it more of an intimate feel than "Shake It Off". That makes it the winner here.

"Shake It Off" gave us a brand new sound.

"Shake It Off" debuted as the ultimate example of the kind of different sound and content that Swift will be going for with 1989. It wasn't about boys or romance, it wasn't about exes or emotions, it was about shaking all of that off and being your own unique self. It already wins in this category.

"Out of the Woods", in terms of content, didn't give us anything really new from Swift. It was another introspective love song about an ex-boyfriend and we can practically count how many of those she has on our fingers and toes. It had a great sound and beautiful imagery, but in terms of the subject matter it was kind of a snooze. Sorry.

"Shake It Off" has a universal message.

Haters gonna hate should be embroidered in needlepoint for every teenager across America. Or for everyone across America. We've all been faced with criticism about the things we do or say and learning to shrug it off is a skill you never quite master completely. "Shake It Off" spoke to that universal emotion and made it fun. It wins again.

"Out of the Woods" has a universal theme.

"Out of the Woods" might not have had a universal message — as far as I know, most of us have never had our heart broken by Harry Styles — but it had a universal theme. We might not all have been in relationships that we weren't sure would work out in the end, but the theme of feeling lost in the woods and being unable to see the forest for the trees is universal.

"Shake It Off" had the best music video she's ever done.

No one will ever be able to change my mind on this. I have seen all of her music videos. All of them. This one was the best. The rest of them can go home. It should win by default, but...

Until "Out of the Woods" gets its own music video, then I'm just going to give this category to "Shake It Off" and call it the best song from 1989 that has been released so far. But I would be absolutely gleeful if the music video for her new song ends up proving me wrong.