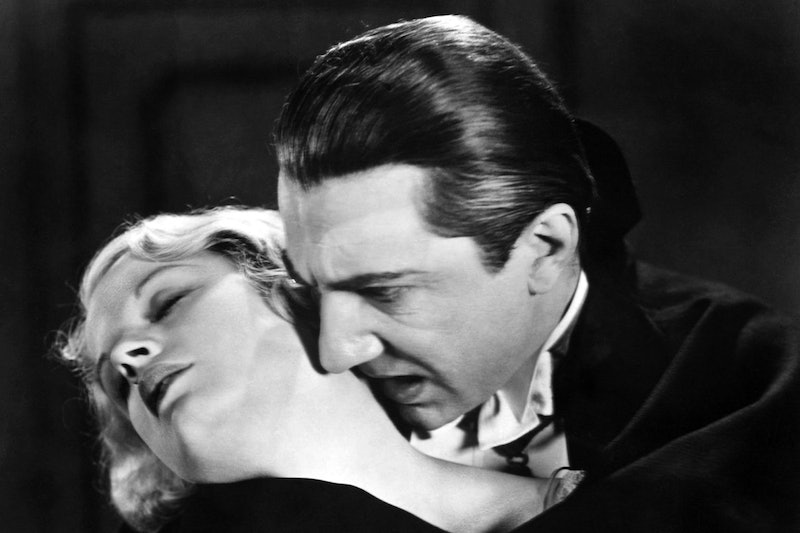 Oh, how the mighty have fallen. Though it put up a good fight, it seems that Dracula Untold is falling short of Gone Girl at the box office. It's rough to see old Vlad take a hit after so many years of dominating the film industry. And I have to wonder, truly, sincerely, from the bottom of my heart: did they just not make him sexy enough?

Hear me out! Although nobody can deny that Luke Evans is wildly attractive (and also openly gay, which is too bad for me) I couldn't for sure say that he's the sexiest Dracula of all time. I mean, it's a tough competition, the Count has appeared in over 200 movies alone, let alone other forms of media. And trust me, I weigh all the qualities of what makes a sexy Dracula very, very seriously.

Regardless, I've developed a scientific (read: warped, totally biased, lacking in any actual scientific research) rating system to judge some of the more memorable Draculas of all time. You're welcome.

I’ve been breaking out this film at sleepovers for the past decade, and I’ve come to refer to him as the tits-on-head Dracula.

17.) Udo Kier in Blood for Dracula

Kier starred in an Andy Warhol produced version of Dracula, and it shows. And maybe he’d be appealing with a different script, but just LOOK how he lunges at this girl’s neck. There is zero foreplay here, and that shit is unacceptable.

16.) Duncan Regehr in The Monster Squad

This is a next-level ridiculous movie. And that jaw is both frightening and impressive.

That hair is a sin against nature. More importantly, in a send-up to the “I don’t drink… wine” trope he remarks that he doesn’t drink coffee. If a guy said that to me do you KNOW how quickly he’d be kicked out of my apartment? Child, please.

It’s not even that he’s unattractive or anything, it’s just that this movie is impressively bad, campy in an unintentional way, which is the WORST kind of campy. And that blazer makes him look like he’s going to join My Chemical Romance’s black parade.

He might actually be the lead singer of My Chemical Romance. So.

12.) Rudolph Martin in Buffy the Vampire Slayer’s "Buffy Versus Dracula"

It was an interesting stunt when Joss Whedon pulled Dracula into Sunnydale for Buffy’s fifth season premiere. That said, he’s a little too pale and boasts a little too much forehead to my liking.

11.) John Carradine in House of Dracula

Kind of wooden, and I spent way too much time trying to figure out if he had a mustache or not (for the record, he does).

10.) Francis Lederer in The Return of Dracula

I mean, I've definitely seen worse at this point, but he just kind of bores me. He's definitely a I'm-just-not-that-into-him kind of vampire.

9.) Christopher Lee in Horror of Dracula and others

Tough to say, because I have so much love for Lee, he is the definition of badass and he reinvented the role of Dracula for a series of Hammer Horror films. THAT SAID, as he continues to gray over the course of the movies I can’t tell if I’m attracted to him in a silver-fox way, or if he scares me even more because he kind of looks like a senator.

If memory serves, this was an awful movie, but the above scene with the vampire vibrators is at least memorable. Purcell's Dracula, for the record, is more of a muscle-y meathead take on the monster, which isn't really my bag.

Rating: 6, because while I can recognize that I'd still possibly sleep with him, that's 90 percent because if you put on a remix of "Venus in Furs" I'll pretty much sleep with anyone.

My mom asserted he was the sexiest Dracula ever, and that when I watched the movie I would see it. I’m not really swooning, and his ridiculous collar kind of gets in the way, but I get the appeal.

He wins points for his sick dance moves, but loses more points for the mole.

5.) Leslie Nielsen in Dracula: Dead and Loving It

If you haven’t seen this Mel Brooks gem yet I feel sorry for you, because it’s absolutely hilarious.

Rating: 7. YEAH, I know, he’s ancient, whatever. Funny people are the hottest people and that’s all there is to it.

Let's walk through this really quick. For all intents and purposes, Lugosi is the trope codifier, the one who gave Dracula any sort of sex appeal, at least in comparison to Nosferatu (which is not on this list because of the name technicality and also because he is half rat/half man). With that said, I'm not sure said appeal holds up well in modern context. My mom says no, but I think it's because he reminds her of my Grandpa Schweffler. But you know what? I've dated a man because his accent reminded me of Lugosi, so...

Rating: A solid 7.5, but based on legacy, because he also kind of reminds me of my Grandpa Schweffler

I didn’t really watch this show — I don’t think anyone did, which would explain why it lasted a season — but it’s safe to say this Dracula was laid left and right. Plus, I always found Rhys Meyers weird-looking and oddly proportioned, which are traits I love in a man.

Rating: 8, but a biased and reluctant 8 that probably isn’t earned by merits of being Dracula.

I know he's on the list twice — and it would be more if I didn't feel weird rating his bat-monster forms — but it's so deserved. I mean, this is the Dracula of my dreams, it's Gary Oldman at his hottest and he's sooooo romantic.

Rating: 9.5, it would be a 10 but let's be fair, if you saw someone in that get-up your thoughts would be “Yeesh, there must be a steampunk convention in town.”

He doesn't need to know what KIND of Dracula he is to be a Dracula, Abed, oh my god.