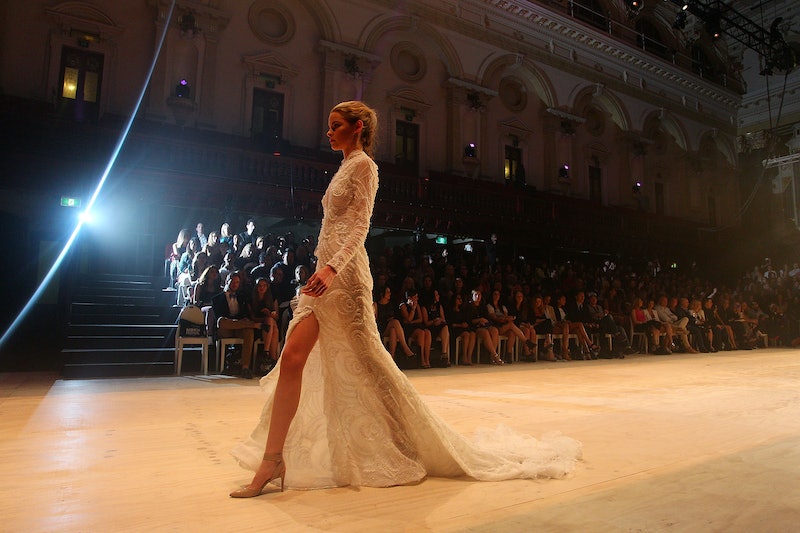 New York Fashion Week has become a legend in its own right. Packed with front-row celebrities, Anna Wintour's emotionless sunglasses (does she like that collection? Does she hate it?), bloggers-turned-millionaires, paparazzi-like hordes of streetstyle photographers, and ethereal models streaming down the runway in priceless clothes — it's flashy, it's overpriced, and we all desperately want to go. But the origins of NYFW aren't as fabulous as its current iteration; in fact, the event was born out of artistic desperation.

In the earlier half of the 1900s, fashion designers were left largely unprotected by copyright law. The designers of the day were desperate, "eking out an existence," according to new research by Columbia law professor C. Scott Hemphill, and their attempt to band together by creating the Fashion Originators' Guild of America proved disastrous. Guild members agreed to stop doing business with retailers who sold copies of their work, and this boycott was so effective that it infuriated the retailers; the department store Filene's even sued the Guild.

In 1941, it all went to court: Fashion Originators’ Guild of America v. FTC (Federal Trade Commission). And the Supreme Court rejected the artisans, saying that efforts to protect their work were violations of antitrust laws. Just check out this snarky Supreme Court tone, scare quotes and all:

After these designs enter the channels of trade, other manufacturers systematically make and sell copies of them, the copies usually selling at prices lower than the garments copied. Petitioners call this practice of copying unethical and immoral, and give it the name of 'style piracy.' And although they admit that their 'original creations' are neither copyrighted nor patented, and indeed assert that existing legislation affords them no protection against copyists, they nevertheless urge that sale of copied designs constitutes an unfair trade practice and a tortious invasion of their rights.

Fashion, said the case, was not worthy of copyright protection. Designers' work was not covered by U.S. copyright law, and so they weren't recognized as legitimate artists. Seventy years later, things haven't gotten much better — designers still aren't getting the copyright protection they need in order to preserve the originality of their work.

Despite the crushing disappointment of the Supreme Court case, those early fashion designers got one thing very right. In 1933, they began throwing seasonal shows of their original designs in order to display their creations on a larger scale. The Supreme Court case may have failed, but the shows have endured: Today, we refer to them as New York Fashion Week.

That Rag & Bone dress you see sashaying down the runway isn't just a peackocky display of fine fabrics, gorgeous models, and disposable income. It's a bold artistic statement directed at consumers and counterfeiters alike: I created this first, and now the world knows I did.