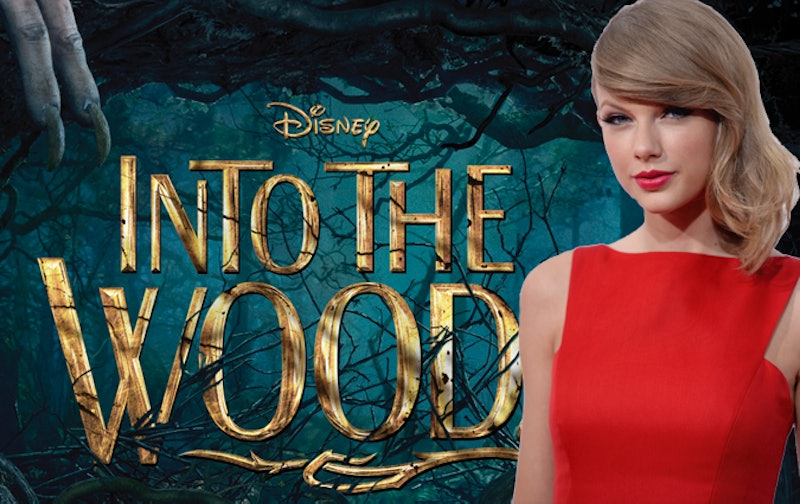 In her latest successful attempt to make us all as feverishly excited for 1989 as possible, Taylor Swift released "Out of the Woods" as the next song (though not the next single) from the album and I have had it on repeat all week. In a surprising move from Disney, Stephen Sondheim's Into the Woods is becoming a feature film that may or may not change some of the more family-unfriendly parts of the musical. What do those two things have to do with each other? As it turns out, "Out of the Woods" and Into the Woods have more in common than just similar titles, though their titles were the first basis upon which I began my analysis.

Both "Out of the Woods" and Into the Woods use forest imagery to tell fascinating tales through catchy songs. Swift sings of nights she couldn't quite forget while Into the Woods delivers those same unforgettable nights in the form of Cinderella's first meeting with the Prince and the Baker's journey to fulfill his wish with his wife. Both of them contain references to dancing, relationships that were built to fall apart (and then did), and a certain inability to actually get out of those woods. In the end, both of them do eventually find their way free from the forest — but at what cost? At what cost?

However, that's where the similarities between the two works pretty much end. Despite their titles making it easy to associate them, both works take that same forest imagery and execute them in wildly different ways. Check out the Bustle Venn Diagram below to see what a missed opportunity it is not to put these two works together, if only to benefit from how much they have in common despite their differences.