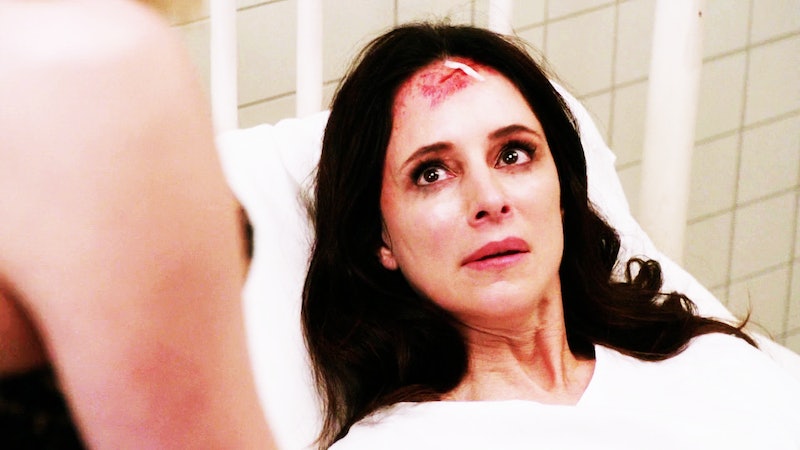 Buckle up, sweethearts. The ball is in Victoria's court and it's only a matter of time before this new war comes full circle on Revenge. Episode promos show Emily Thorne preparing to reveal herself to her father, and her father bloody in a police station. But what put him there? Victoria Grayson actress Madeleine Stowe told E! Online that Victoria might die on Revenge in Season 4 this and after Conrad's surprising murder, it wouldn't be all that surprising if she did. But producers Gretchen Berg and Aaron Harberts also revealed that Season 4 would be a race to control David. In other words, for the impending war over Emily's unstable father to exist, both Emily and Victoria must be alive to fight it.

For all we know, David could have realized that the sleeping woman is actually his daughter. He seemed to look at her with recognition — as if Amanda is covering her identity while she seeks the revenge he asked her to. In that case, the Emily Thorne torture Victoria spoke of would be justified, and quite frankly his fault. David could be in jail Sunday because he attacks Victoria, or something of the sort — but whatever the case, he doesn't kill her.

Once Emily reveals herself all hell will break loose. You'd think that the heroine would be angry with her father for faking his death without seeking her out. But the truth of the matter is, he thought she was dead. When the real Emily died, word got to David that it was his daughter and he's been on a mission to do right by Charlotte ever since. Now producers are calling the man "unstable," but why? Amanda is alive and Victoria knows it and David is not likely to thank her for lying. Seeing his daughter alive, following his wish to avenge his wrongful conviction, might throw him off the deep end with only Victoria and Emily to pick up the pieces.

Victoria is guilty as all hell when it came to David's conviction but she never meant to be a part of his murder. There's no doubt in my mind that David was her one true love and she will do anything to win back his heart. If David knows that Emily Thorne is actually Amanda, the long-awaited revenge Victoria "owes" Emily might be put on pause. But the two won't be able to stop fighting — they obviously can't help themselves. The only difference now is that the fight will be over David's heart.

Emily knows Victoria makes her father happy and that the only way to get to Charlotte is through Victoria. When we left Emily and Victoria they were both out for blood, but once Emily realizes her father went back to Victoria who knows what will happen. With David back in the picture, Victoria and Emily are bound to remain at each other's throats, but who will David choose? If you ask me, if David and Emily decide to team up against Victoria, Victoria is screwed.