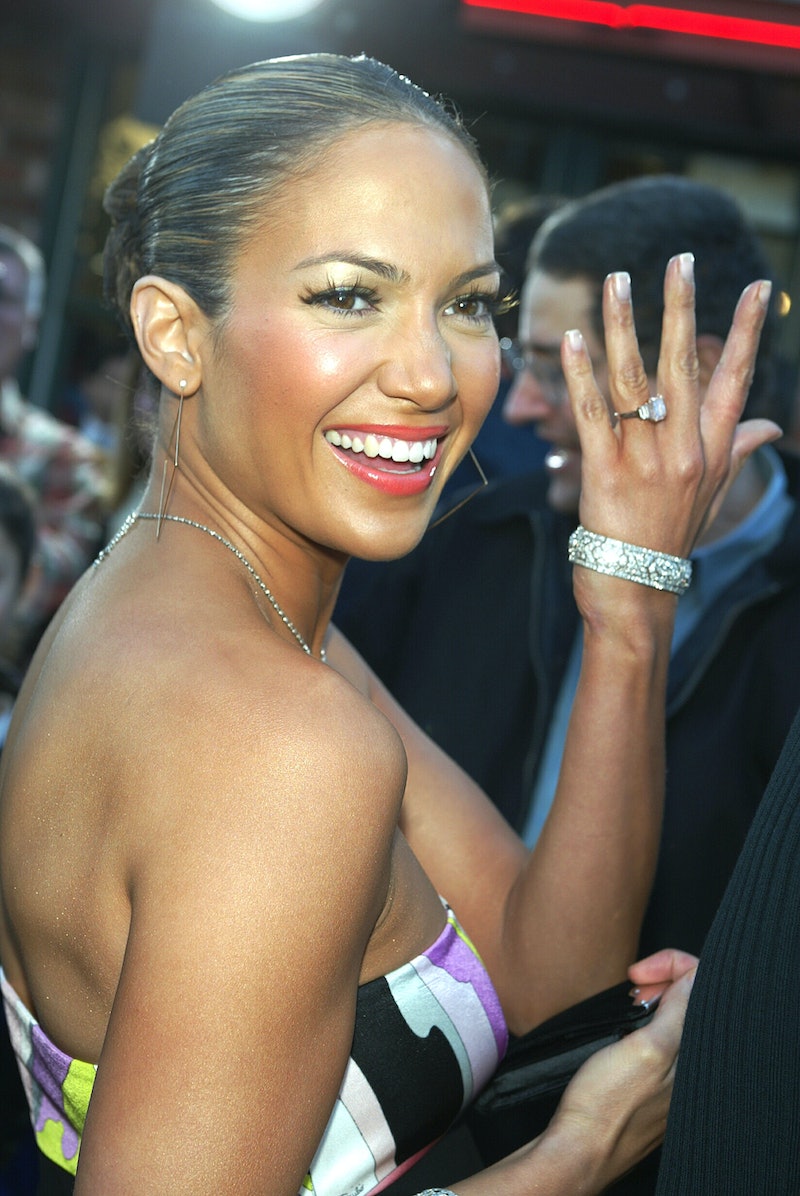 The flawless, ageless alien engineered by Versace to rule the Earth who goes by the name of "Jennifer Lopez" has come to be known for many things over the years: a consistently top tier musician, a pop culture icon, and the female half of Gigli. On top of all that, Jenny from the Block has also dated, broken up with, re-dated, married, and divorced what seems to be half of Hollywood since she rose to fame in the early '90s. I think it's a testament to just how successful her career has been that her love life has never fully eclipsed her professional one, but still, the ups and downs of her relationships aren't exactly a secret. Jennifer Lopez opened up about her relationship past in an interview with Britain's The Mirror, and it proved she's just as "real" as she's always claimed.

I have gone from relationship to relationship but, at the end of the day, I am not ashamed of the path I have taken or the lessons I have learned. I am who I am and I am human.

I kind of love her for saying that. For someone who doesn't typically spill about her highly publicized love life, it's definitely refreshing to hear her not only talk about it, but be so damn confident while doing so. The Grammy-nominated "I Luh Ya Papi" singer was most recently linked to her back-up dancer Casper Smart until they split in April 2014; although they seemed to be doing the on-again, off-again thing all summer. Before that, Lopez got married to Ojani Noa in 1997 (this marriage only lasted a year), dated P. Diddy after that, got married to backup dancer Cris Judd in 2001 (this also lasted just a year), became "Bennifer" with Ben Affleck in 2002, wed Marc Anthony in 2004 (until their divorce in 2012), and then dated Smart.

I got exhausted just typing that, so I can't imagine how J. Lo feels, especially with two little kids running around. Actually, never mind. She's J. Lo. Does she even get tired?

Well, apparently she must, because she went on to tell The Mirror that since she and Casper split, she's taking some quality time to herself:

I do what feels right in the moment and right now it feels good to just be on my own and have some "I love Jennifer" time, which I haven't done a lot in my life. My friends are constantly trying to set me up but I'm just not there right now. It's not something that's a priority.

Single, dating, married, divorced — Jennifer Lopez is so in charge of her life and her kickass career that her relationship status barely registers. The only thing I will say is that I hope Selena Gomez has been taking notes, just in case that biopic ever comes to be.