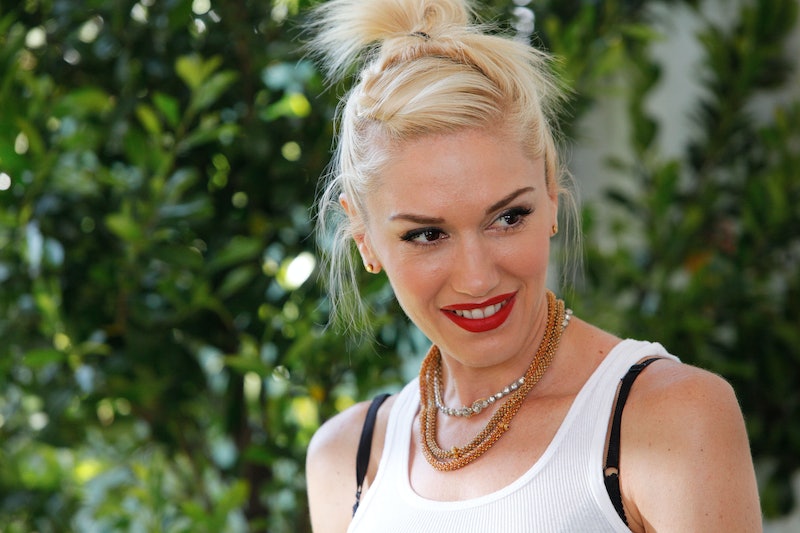 Could it possibly be true? According her record label's website, Gwen Stefani's new single, "Baby Don't Lie," will premiere on Sunday, Oct. 19. That's only three days away. That's practically tomorrow. Hell, that's practically today! Wait...I don't want to let myself get too excited this time around. Of course, "Baby Don't Lie" was initially rumored to be premiering on Oct. 6, but obviously, that didn't happen. I've been waiting to hear new music from Stefani for roughly the last six years, so honestly, it was a pretty devastating blow — but I've since recovered (mostly). Thankfully, things seem to be a bit more "official" now.

Fingers crossed that this is the real deal! I doubt my heart could take another false alarm.

As a refresher, we know that "Baby Don't Lie" was co-written and co-produced by OneRepublic front man Ryan Tedder (Adele's "Rumour Has It," Beyoncé's "Halo," Leona Lewis' "Bleeding Love," etc.) and Benny Blanco (Rihanna's "Diamonds," Iggy Azalea's "Black Widow," Ed Sheeran's "Don't," etc.). Believe me: This is exciting news. Tedder and Blanco most recently worked together on Maroon 5's smash hit "Maps" and Ariana Grande's "Why Try." Give both tracks a listen below to get a better idea of how "Baby Don't Lie" could end up sounding.

Here's everything else you need to know about Stefani's big comeback single:

According to Interscope's PlayIGA website, "Baby Don't Lie" will be sent to radio stations and iTunes on Sunday, Oct. 19 at around 10:00 p.m. CST/11:00 p.m. EST. You better believe that I'll be perched behind my keyboard, waiting not-so-patiently to give Stefani my hard-earned coins. You should be, too! You don't want to feel left out on Monday morning when the entire world is jamming out to Gwenny's next big hit and all you've got on your iPhone is, like, the Titanic soundtrack. (That is, if we don't get skunked again.)

Do We Have Any Lyrics?

Yup! On Monday night, Tedder and Blanco decided to tease fans by hyping up "Baby Don't Lie" on Twitter, and in the process, revealed a couple of lines (above). Granted, we probably all just assumed that the phrase "baby don't lie" would show up in the lyrics somewhere, but hey, it's better than nothing!

On a Scale of 1 to Colbort, How Amazing Will the Song Be?

Likely approaching Colbort in terms of overall amazingness. Gird your loins, people. This is not a drill.