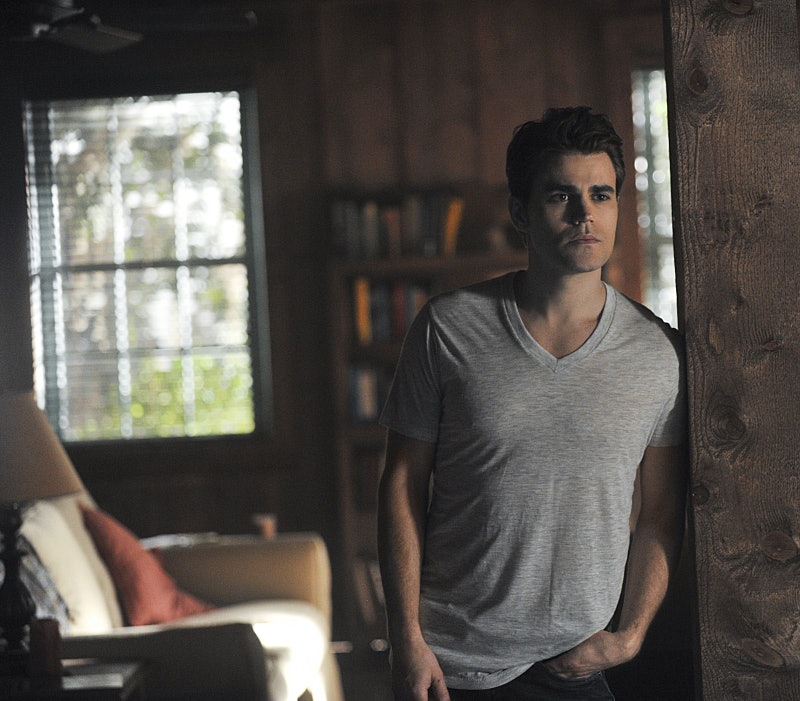 Is anyone else starting to think that Stefan Salvatore is starting to crack? Because I can't think of any good explanation why he'd want to align himself with Tripp, the head of the Mystic Falls community patrol, who clearly wants to annihilate all vampires. Now, I've tried to defend Stefan giving up on Damon on The Vampire Diaries so far this season, but now I'm just concerned. On Thursday night, Stefan tried to kill Enzo and decided to link forces with fellow Founding Family member, Tripp. Which left me wondering two things — is Stefan evil again and is this the final nail in his Season 6 coffin?

At the end of last Thursday's episode, TVD revealed that Tripp is not really interested in keeping the residents of Mystic Falls safe — he's more interested in rounding up the vampires around its borders, piling them into an armored truck, and burning them to death. No, I'm not kidding, it's as twisted as it sounds. So, naturally, you can understand my concern that Tripp's use for Stefan is primarily to get him close so that he eventually kill him later.

During this Thursday's episode, "Welcome to Paradise," Stefan left his "new life" to track down Enzo and kill him for snapping his girlfriend's neck and being all #sorrynotsorry not about it. (I mean, this is Enzo, what did Stefan expect?) And, he succeeded. After Tripp attempted to drug Enzo with vervain, Stefan stepped in and shot him in the back (literally) multiple times with a stake-gun. And then decided that he and Tripp Fell (yup) were going to be buddies in the anti-vampire campaign. To which I thought, "Hello, Stefan? Buddy? YOU ARE A VAMPIRE."

When I ask, "Is Stefan evil?" I don't mean the same kind of evil he was when he became a Ripper again. This is a different, fueled by hatred, kind of evil that's directed at Enzo, but it's really, most likely, directed at himself for coming back to the land of the living and, as a result, Damon being left behind. Stefan's an emotional guy and, even though he's trying to pretend like he's in a good place about Damon's death, he's totally screwed up by it. He hates himself for returning and he hates Enzo for ruining the facade he'd built around himself to keep the self-loathing at bay.

So, yes, Stefan is absolutely evil and it's going to get him into even bigger trouble this time than it did with Klaus way back when. Because Tripp is significantly more evil and aggressive than Klaus and 100 percent more willing to kill Stefan as part of his "greater good." Stefan might think he hates vampires because of Enzo's behavior and losing Damon, but he's in WAY over his head here.