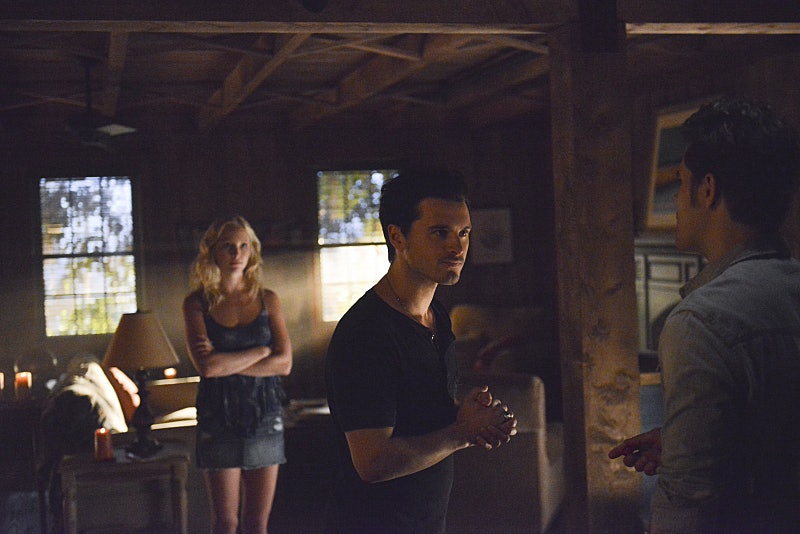 Even though I've never been a huge supporter of the Steroline 'shipping phenomenon that spawned a thousand fan fiction sites, I admit that I was slightly curious to see how these two would gel together outside of the friends zone. But after witnessing Stefan's cold and distant behavior during last week's Vampire Diaries episode "Yellow Ledbetter," I'm not so sure if Stefan and Caroline should end up together. In fact, there's a big part of me that wants to see Caroline hook up with Enzo instead.

If you recall, this isn't the first time I've mentioned that this particular pairing could be pretty great together. And as the two of them continue to share more and more screen time, the stronger my love for this particular dynamic grows. Up until now, the idea of these vamps getting romantic was more like a far-off possibility than anything else — you know, back when we still thought Steroline was going to take center stage. But now that Stefan has decided to distance himself from all of his Mystic Falls ties (Caroline included), the thought of a Carenzo (Enzoline?) love story suddenly seems a lot more plausible.

I'm not saying that their relationship is anywhere close to what Caroline shares with Stefan. He's been a mentor and one of her closest friends since the day she first became a vampire. It's a strong bond and one that would be hard for anyone to compete with. However, when has logic and reason ever stopped Julie Plec from making an unlikely romance bloom? Exhibit A:

Seriously, the woman knows good chemistry when she sees it. And now that Steroline and Delena seem to be getting put on the back burner, I think Plec has every intention of making Caroline and Enzo TVD's next big "it" couple. And I gotta be honest, I don't exactly hate the idea. For starters…

Just look at the expression on his face when he sees that Caroline's hurting. It hurts him to see her in pain, which prompts his Round 2 neck-snapping session with Stefan. (Granted, he shouldn't have killed an innocent girl in the process, but the underlying sentiment was very, very sweet.) There's no denying in this moment just how much Enzo cares for our favorite blonde vamp. And this act of chivalry is enough to make any TVD viewer swoon.

They Find Each Other Endearing

Is it my imagination or do these two look genuinely happy to see each other? Caroline can try to hide her affection behind fake annoyance all she wants, but we know her well enough to read between the lines. (Just look at the way she used to lash out at Klaus as a way to hide her true feelings.) She shares a similar affliction when it comes to how she treats Enzo. She may not want to find him charming, but she totally does. Plus, if you substitute the word "gorgeous" with "love," it's basically like Klaus 2.0.

They're Both Loyal to a Fault

You will never find two other people who are more dedicated to their family and friends than this duo right here. Caroline has been working so hard at trying to bring the gang back together. Nothing is more important to her. Meanwhile, Enzo (unlike Stefan) has never given up on his quest to bring Damon back. Just imagine if they were to focus some of that fierce dedication on each other. It'd be the most loyal relationship TVD has ever seen.

But hey, can you blame her? And if I must be denied my Klaroline fix, then this may just end up serving as a suitable substitute.

So you've heard it here first, folks. Carenzo is definitely going to be a thing. Just you wait and see.

More like this
You’ll Most Definitely Recognise Kyle Pryor’s Soap Star Girlfriend
By Sophie McEvoy
The ‘White Lotus’ Cowboy Theory May Spell Danger For Tanya
By Grace Wehniainen
Theo James Revealed The Truth About His 'White Lotus' Nude Scene & Fans Can't Cope
By Stephanie Topacio Long
The 'Kenan & Kel' Reunion On 'SNL' Took A Dramatic Turn, Thanks To Keke Palmer
By Brad Witter
Get Even More From Bustle — Sign Up For The Newsletter