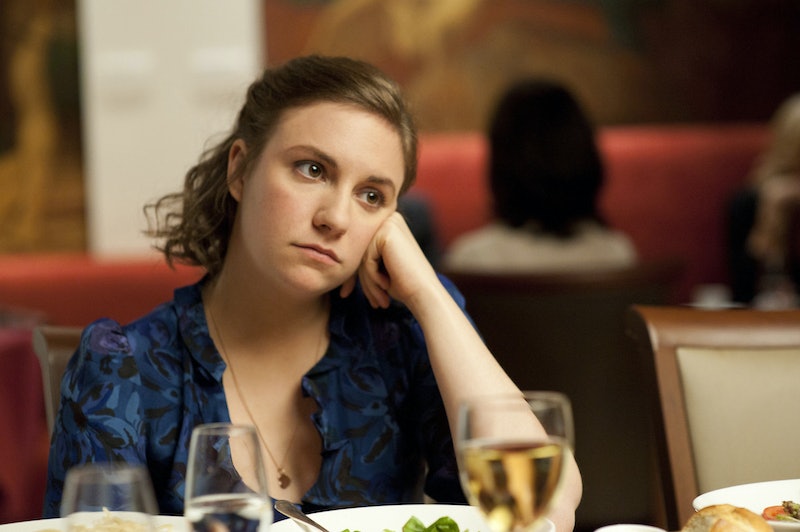 “I want to tell my stories,” Lena Dunham writes in her new book Not That Kind of Girl, “and, more than that, I have to in order to stay sane.” Dunham must be feeling very grounded, then: Not That Kind of Girl is stuffed to the gills with recollections, reflections, and rants. And while the essays in the book deliver tons of personal stories and secrets, you may have heard some of them before.

Wondering why they seem so familiar? You’ve probably binge-watched Girls or have had one or two nights in watching Tiny Furniture, her 2010 indie hit. If you have, you will for sure pick up on some of Dunham’s more notable boyfriend and work stories and get to relive some of your favorite TV moments; if you haven’t, a) why not? and b) you’ll be in for a sweet treat when you finally catch up on her work and get to watch your favorite essays unfold on the screen in front of you.

Whether you have caught Dunham on the tube or not, check out some of the scenes from her past that have gotten a second life in Hollywood, and learn more about the real-life characters that inhabit Dunham’s world.

THE Q-TIP NIGHTMARE in Girls

Remember this scene from Girls when Hannah sticks a Q-tip too far into her ear? (How could you forget that?) In Dunham’s essay, “Emails I Would Send If I Were One Ounce Crazier/Braver/Angrier,” she writes an email to “Dr. Blank,” saying “My eardrum was punctured, you WHITECOAT. And you treated me like a psycho with a little scrape … this has since become my most traumatic memory.”

Tiny Furniture follows Aura (Dunham) in her first post-grad autumn as she hosts at a restaurant and sleeps with one of the cooks, the jerkiest of all jerks. Seems like she was inspired by real life, here, as she explains: “At my first postcollege job in a downtown restaurant, I met a different kind of guy. Joaquin was almost ten years older than me, born in Philadelphia, and possessed a swagger that seemed unearned, considering he was wearing a FUCKING FEDORA.” Ahem, look familiar?

Dunham had a high school flirtation over AIM with a boy named Igor. The two had a good Internet thing going for a while, but Igor may have asked someone to tell Dunham he’d died to distance himself. She never got a full confirmation, though, but her Google searches have turned up fruitless. She tells us that “Years later, I … give his last name to a character on my television show. A smoke signal, so that whoever wants to know can know: he was kind to me.” Perhaps his last name was Ploshansky — Ray’s last name on Girls.

Those actresses that play Dunham’s mom and sister in Tiny Furniture? Her real-life mom and sister. And although they’re definitely good actresses, their roles weren’t too much of a stretch — her mom, in Dunham’s fictional and real worlds, is a no-nonsense but loving photographer; her sister is deadpan, crazy-smart, and effortlessly cool, and she writes about them both with nothing but total admiration.

Jessa was learning to live soberly last season on Girls, and on a whim she started working at a high-end children’s clothing store. Another baby boutique alumna? Dunham herself! In “Little Leather Gloves,” she recounts the nine months she spent working at an overpriced and over-staffed store in which she earned $100 a day — and where the free lunches she got typically cost more than daily store profit.

More like this
Josh Peck Shows Love To Jennette McCurdy After Her Shocking 'iCarly' Revelations
By Radhika Menon
10 Must-Read New Books Out This Week
By K.W. Colyard
The Most Anticipated Books Of August 2022
By K.W. Colyard
Jennette McCurdy’s First Kiss On 'iCarly' Didn’t Go As Planned
By Bustle Editors
Get Even More From Bustle — Sign Up For The Newsletter