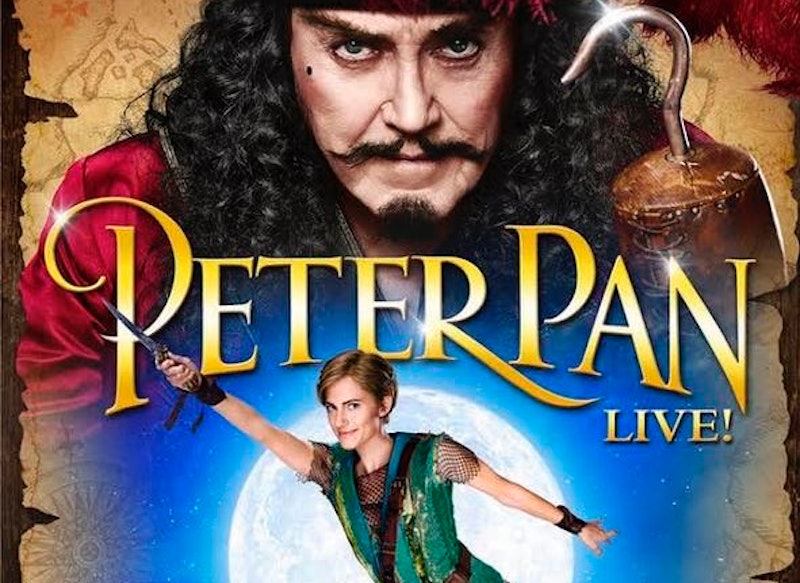 So NBC released a new poster for their Peter Pan Live special and it was... It looked like... Well, let's just say it looks less like the poster for a musical special and more like the VHS cover of about four live action Disney movies. Sure, Peter Pan was, in fact, turned into a Disney movie, but that doesn't exchange the fact that the new Peter Pan Live poster makes it look like the special is going to be a hot mess. An awesome, campy, hilariously fun hot mess, but a hot mess all the same. But as a long time fan of Peter Pan, even as I acknowledge that Peter Pan is a sociopath, I have to question what exactly it is that everyone's complaining about with this poster. I mean, it could have been a lot worse.

After all, the poster focuses solely on Peter Pan, played by Allison Williams, and Captain Hook, played by Christopher Walken. That leaves out, like, half the cast. Where were Wendy, Michael, and John Darling? Where was Tinkerbell? Where was Nana? All right, so the Darlings' Newfoundland was an invention of the Disney movie who didn't even get to go to Neverland with them, but you'd think the live special would reference her in some way. Essentially, there could have been a lot more camp, a lot more pizazz and a lot more characters added to the poster before I'd really call it over-the-top bad.

Don't believe me? Well, I took the liberty of making a new poster including all of the elements I mentioned plus a little more OOMPH. And when I finished, I said, "Good. This will make everyone love the original poster ten times more. NBC should totally be paying me." I also cringed away from the hot mess that I had created. But, regardless, the next time you start making fun of the Peter Pan Live poster, just make this comparison.

And this is totally what could have been.

You love that poster more than anything now, don't you?