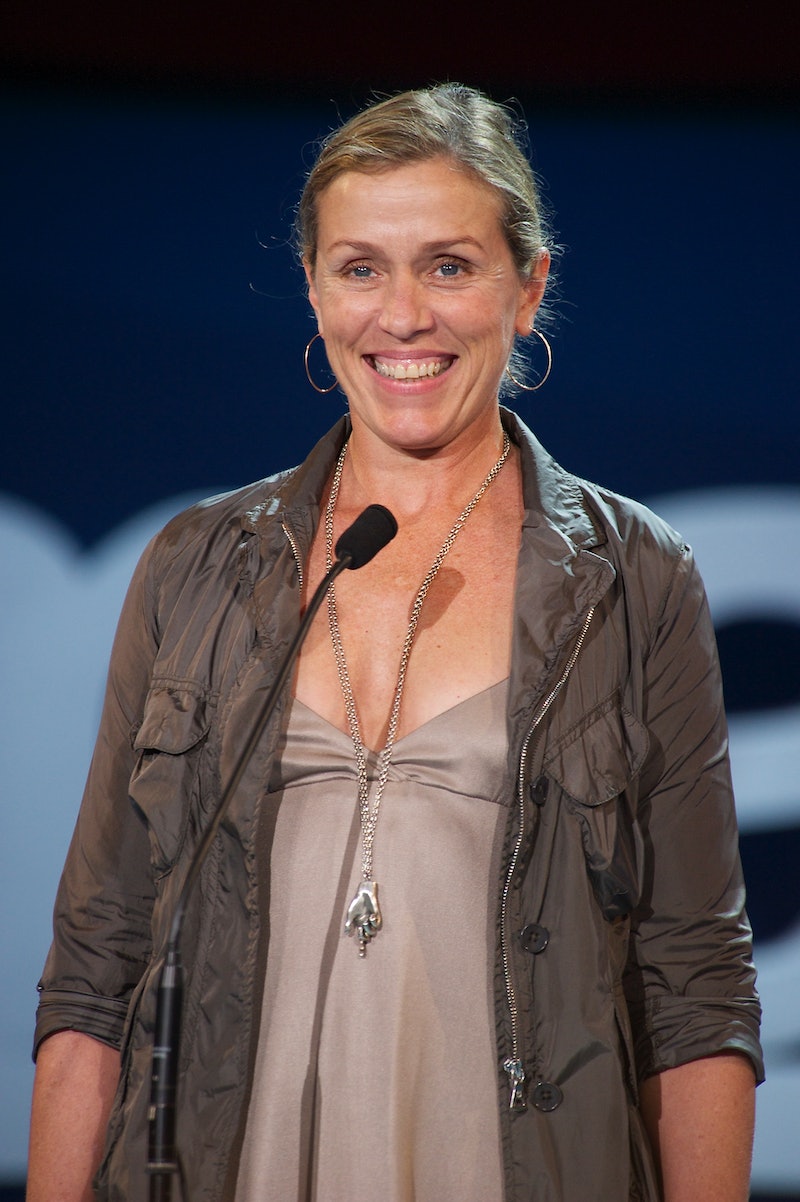 The headline for the New York Times piece on Frances McDormand is as bold and straightforward as the Oscar-winning actress herself: "A Star Who Has No Time for Vanity." The 57-year-old star of the upcoming HBO mini-series Olive Kitteridge didn't shy away from talking about a subject in Hollywood that's about as taboo as they come: aging gracefully. McDormand's thoughts on our youth-obsessed culture are as blunt and no-nonsense as some of McDormand's on-screen characters in films like Fargo, Friends With Money, and Almost Famous... and honestly, it's a good thing that someone is being so unabashedly unapologetic about it.

"We are on red alert when it comes to how we are perceiving ourselves as a species,” McDormand told the Times. "There’s no desire to be an adult. Adulthood is not a goal. It’s not seen as a gift. Something happened culturally. No one is supposed to age past 45 — sartorially, cosmetically, attitudinally. Everybody dresses like a teenager. Everybody dyes their hair. Everybody is concerned about a smooth face."

Hear, hear. While every woman certainly has the right to feel vibrant, beautiful and young at heart, McDormand makes a vital point about the idea of adulthood being regarded as a negative thing. The star hits it even more on the head when she describes looking older as a sign of wisdom and "that you are someone who, beneath that white hair, has a card catalog of valuable information." In a culture where "she looks so good for her age" is a common compliment, McDormand's idea to flip the script on that mindset is vital. One that implies wrinkles aren't just a sign of looking one's age (the horror!), but that they actually tell your life's story. Really, is there anything more beautiful than that?

Thankfully for McDormand, and the rest of us, it seems the tide is at least starting to turn on the Internet. Aging, especially in your 30s, now seems to be regarded as a badge of honor. There's been an influx of articles devoted to why your 30s are so much better than your difficult 20s and it seems to be striking a nerve. Here's to hoping that mentality spreads well into the 40s, 50s, 60s, and beyond.

But McDormand — who has been married to Oscar-winning writer/director Joel Coen for 30 years — took an even harsher stance when it came to the subject of plastic surgery. As McDormand put it, "I have not mutated myself in any way. Joel and I have this conversation a lot. He literally has to stop me physically from saying something to people — to friends who’ve had work. I’m so full of fear and rage about what they’ve done."

It may be easy to be initially upset with McDormand's stern stance on her friends and coworkers' personal decisions to have plastic surgery, but the key phrase to pick out here is "fear." She is fearful that some of the women she admires may have lost a piece of themselves for the sake of vanity and Hollywood's unfair standards set for women. Feeling comfortable in your own skin, whether you're in your 20s or 50s is critical, and having famous faces like Jennifer Lawrence of Frances McDormand change the conversation in that direction can only help.

While McDormand, like anyone else, should respect any woman's choice to do what she wants with her face, boobs, or any other part of her body, her viewpoint on the power and inherent beauty of embracing your age is what makes her one of Hollywood's biggest talents and one of its most vital voices.

More like this
At 14, Tatiana Maslany Was Obsessing Over Tamagotchis & The Spice Girls
By Gabrielle Bondi
Beyoncé & Madonna’s “Break My Soul” Remix Honors A Group Of Black Icons
By Stephanie Topacio Long
Naomi Osaka & Emma Raducanu’s Experiences Have Inspired A New Amazon Show
By El Hunt
We’ve All Had Bad Sex. Nona Willis Aronowitz Is Talking About It.
By Sophia Benoit
Get Even More From Bustle — Sign Up For The Newsletter