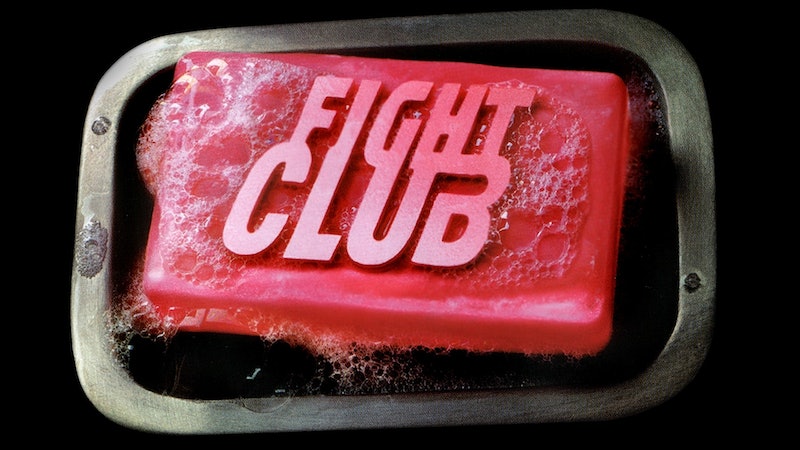 During this time of year, it’s totally normal to list “carving” as an everyday activity. Carve a pumpkin, a turkey, heck you could even carve a tofurkey in all of its squidgy glory. On Friday, October 17, 2014, I carved a bar of soap to look like the Fight Club logo. It’s not that I have a certain penchant for mischief and mayhem or I really miss elementary school art class, rather, it’s Fight Club ’s 15th anniversary this week. I was at the beginning of my angsty teenage years when Fight Club was released in 1999, and boy, did I love that movie’s dark philosophy and grimy rage. I had a lot of feelings back then.

It’s been 15 years since Tyler Durden, Marla Singer, and the nameless narrator were brought to life on the big screen and the film has since become a part of our cultural lexicon. I still hear plenty, “The first rule of Fight Club is…” jokes on a regular basis and remind myself that I am not my job, or my khakis (I don’t actually own khakis, but now that I’m 27, I get what Brad Pitt meant by that... but I digress).

So when the task of carving a bar of soap to look like the Fight Club logo was presented to me, I nabbed the assignment immediately. At first I felt nostalgic for my MySpace profile that used to be littered with quotes from Tyler Durden, but then I wondered, “Would carving this soap somehow make me crave anarchy and violence?” Let’s find out:

I made my way to the “Bath Needs” aisle at CVS. Unfortunately, there is no “Alter Ego Cleansing” aisle, so I had to work with what was available.

It’s a good thing Fight Club came out 15 years ago, because it’s quite clear that soap in a bar form is far less desirable than liquid soap and it’s many beaded, scented varieties. Look at these sad bars of soap, reduced to the bottom of the shelf like bags of store-brand cereal. At this point, I was getting looks for taking pictures of the soap aisle, so I promptly picked up the cheapest option and made my way to the self-service check out.

I know the serrated knife is a lot more metal, but I’m an anxious person, so I brought a butter knife along for the journey, for safety purposes. Neither worked and I ended up using a pencil. More on that later...

NUTS. The soap was already emblazoned on BOTH sides with the logo from said soapmaker.

Let's try the other side...

Oh right! This is soap. I can just shave off the logo with my super metal knife. Huzzah! Wait, I shouldn’t say huzzah, that’s not moody enough. I mean, uhhh, it doesn’t matter what you use to carve with, just that you carve something in this world and don’t become the sapling that the corporate universe wants you to be.

So, I tried getting the raised effect of the lettering but found that my soap was either too small, or my tools were too large for such precision. Thankfully, there was a No. 2 pencil nearby and that worked just fine. Who knew this would be so complicated? TYLER DURDEN, I GUESS.

Nailed it! Sort of. I didn’t have Edward Norton and a warehouse, so I went with this pumpkin bucket and the green room of a theater I work in.

I think I did a damn fine job, if I do say so myself. However, the necessity of having to take a selfie meant I couldn't hold the soap with my right hand and match the poster's placement. The struggle!

And just for funsies

Just me, Ed, and Soapy hanging out.

So, did I become a crusader for the anti-establishment? Not really. I did, however, become very tired of the smell of that soap very quickly. More importantly, I learned that soap-carvery should be left to the professionals: Jared Leto, and kindergarten teachers during the last week of school who have completely given up.