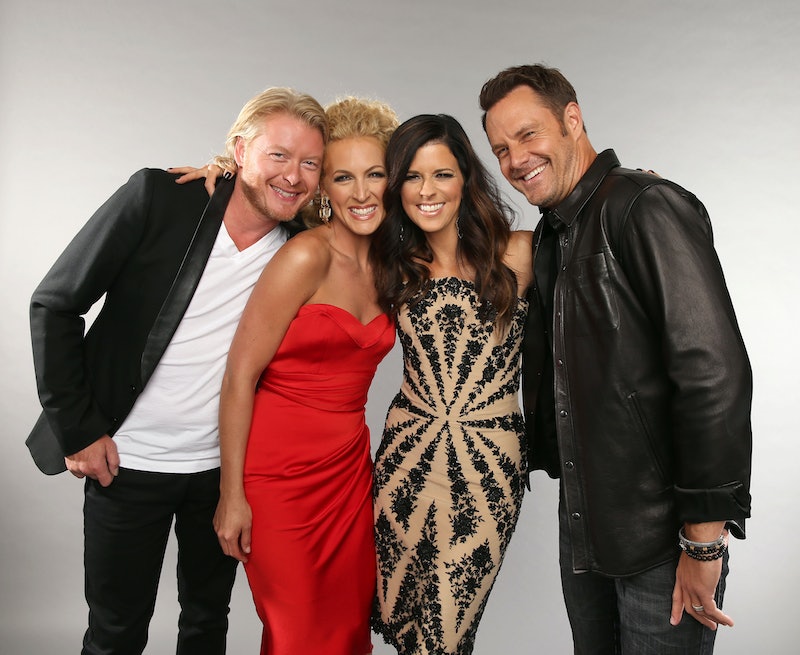 Let the battles continue. Last Monday, The Voice Season 7 battle rounds began with wildly surprising results and, frankly, disappointing results at times. (I still can't wrap my head around contestant Maiya Sykes going home after her battle.) But one thing that isn't surprising is Blake Shelton's advisor choice for Team Blake — back in July, NBC announced that country quartet Little Big Town will advise Team Blake in Season 7, making their advising debut during last Monday's first battle rounds episode. And, well, of course they are because who better to advise Team Blake, which is stocked with potential country stars, than country stars.

So, what's this country foursome all about and how did they get the honor of advising the team of three-time The Voice champion, Blake Shelton? Well, by having a pretty lengthy career, Top 10 country hits, and being nominated for more than a handful of Grammys, CMAs, and ACMs. The group, which has been together since 1998, is made up of Karen Fairchild, Kimberly Schlapman, Phillip Sweet, and Jimi Westbrook. And they're actually releasing their new album, Painkiller , on Oct. 21, which will be the group's sixth release to date.

Still not convinced that they're going to help one of Team Blake's singers win it all in Season 7? Well, Little Big Town's last album, Tornado , debuted at the top of the Billboard Country Chart and remained there for five consecutive weeks while it became certified Platinum. And they recently came off of their sold-out headlining tour, The Tornado Tour, that hit 25 theaters in the U.S. and Canada. Basically, if you haven't heard of Little Big Town, you've been living under a rock because they're pretty huge. And by "pretty huge" I mean 25 award show nominations huge — including two CMA Vocal Group of the Year wins, a CMA Single of the Year win in 2013, and an Emmy Award.

If there's anything we've learned from Team Blake on The Voice, it's the he's consistently good at acquiring a team with a country flair. So, it makes perfect sense that he'd choose award-winning, country veterans like Little Big Town to take his already impressive team through the battles. Team Blake's still got a handful of HUGE battles to come with Texas-native and Kelly Clarkson 2.0 Reagan James still waiting for her turn in the ring. So, expect some seriously country-song battles, Team Blake fans. Because the country star is absolutely not messing around in Season 7 when it comes to that trophy.