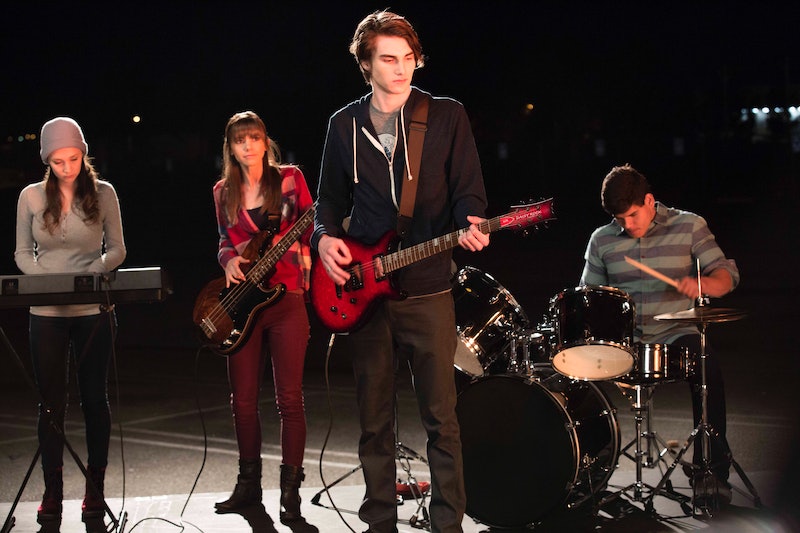 Things have gotten, well, awkward on Awkward . Not only did Jenna take Owen's virginity, but on the last episode, she also probably broke his fragile little sophomore heart. We already know that Owen comes between Jenna and Tamara's friendship this season and creates major conflict, but all the drama will be going down on the next episode of Awkward, titled "Hashtag Drama." Owen is definitely back this week, but probably not whining over his broken heart or the loss of his his virginity, considering he will be too busy moving on with Jenna's BFF.

So far, Owen has just been an adorable sophomore who has a huge crush on Jenna. He's in a band and even wrote a song after having sex with her, which, in retrospect, is a little weird. Thus far, Tamara has only made a few comments about Owen including how she thinks he's hot and also that she is convinced he is into her. Jenna, being the idiot that she is most of the time, fails to mention that, oh yeah, she’s already hooked up with him, which will inevitably lead to, well, #drama.

Everything should be going down on this weeks episode of the show because Owen aka Zak Henri told everyone on Twitter how many episodes he is in and according to him, he only comes in for four episodes:

"Hashtag Drama" marks the fourth Zak Henri episode, which might mean that we will be saying goodbye to him forever after Tuesday night. We met Owen on New Years Eve when he gets in the way of Matty and Jenna’s new years kiss and he’s been around for three episodes now all boiling up to this moment.

Unfortunately, the damage he causes in the upcoming episode lingers for quite awhile meaning that this is probably the episode that he hooks up with Tamara and she can cross him off her "f**k it list."

Jillian Rose Reed confirmed to E! Online before the New Year's episode happened that Owen would be a problem for the girls and that the second half of Season 4 brings plenty of BFF drama for the besties. "There is also some boy drama coming up with Jenna and a new boy coming down the line that will cause some major conflict."

Could this be the "major conflict"? Possibly. If Jenna never told her that she and Owen hooked up, how is Tamara supposed to know to back off? Jenna also flat out told him that she didn’t want to date him. Is it douchey to go after her friend? Yes, but it’s high school and everyone hooks up with everyone and Tamara is kind of always hooking up with Jenna’s leftovers.

If this is the big one, I'm not really sure how all this could happen in one episode, considering the showrunners even talk about the mess that Owen creates this season — maybe the actor miscounted his appearances. But if this is the last time we see Owen, it must mean that something else huge is going to go down on Awkward, and soon.