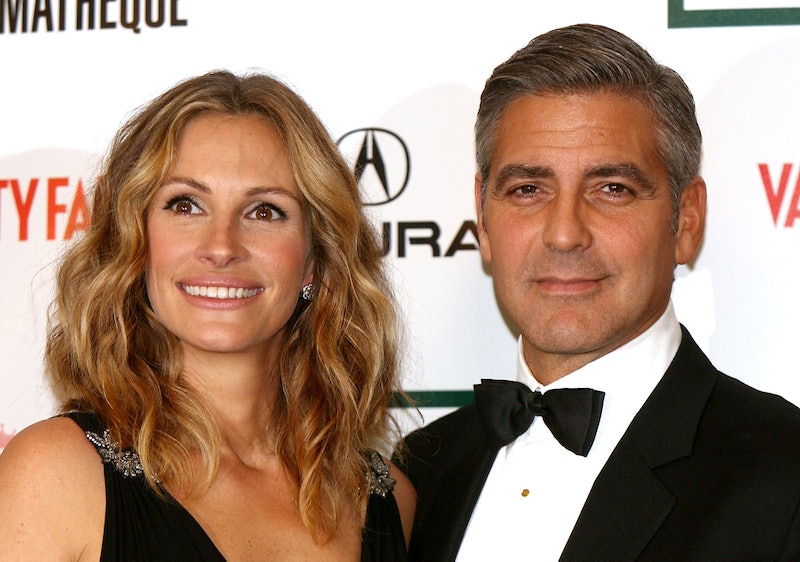 I never exactly thought of Julia Roberts as being full of wisdom before, like, five minutes ago, but it totally makes sense. She's been kind of elusive as of late, arriving to big red carpet events only when she feels like it and eschewing Hollywood norms by wearing formal dresses with white button-downs under them because she's Julia Roberts and she does whatever the eff she wants. So it really makes sense that when I heard Julia Roberts' marriage advice for George Clooney I thought, "Damn, has she always been this wise?"

At the 2014 GLSEN awards on Friday, Roberts spoke with Access Hollywood and was asked if she'd be giving marriage advice to her friend the Cloonster. First she jokingly responded, "Oh yes. I'll be advising George Clooney on his marital life. I'll get right on that!" Ahahaha. She's being sarcastic! 'Cause it's not like she personally knows the George Clooney. Oh wait. She totally does and totally could give him marriage advice whenever she wants.

But after her mysterious bout of sarcasm, Roberts dropped the real marriage advice truth bomb: "Well, the only advice for that is finding your person — and he's found his person." Ohhhhh snap. I don't know about you, but I take this as 100 percent proof that Clooney and Amal Alamuddin will be together forever. Seriously, if Julia Roberts says that you've found your person, then you've found you're person. Also, that quote is just so Pinterest-y in the best way. Corny inspirational quotes are usually just that, but every once in a while there's one that makes you say, "Well, now, that's just true. I could totally see making my own bad DIY artwork with that quote on it."

By the way, Roberts has already found her person. She's been married to Danny Moder since 2002. What I'm trying to say is, she knows what she's talking about.

So there you have it. Julia Roberts has gone from actress who is EVERYWHERE to actress you miss when she's gone and who now only pops out to surprise you with a new movie or with truly epic advice. Thanks, Julia. Now, go find your person! You heard the lady.