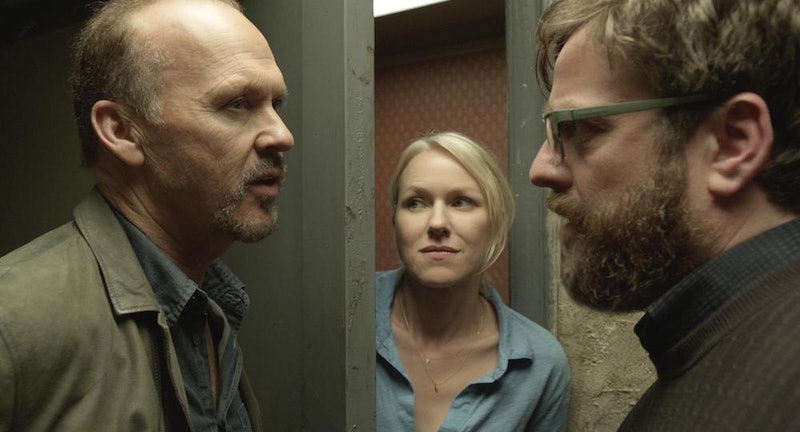 The first act of the tremendous box office hit Birdman darts among the sullied corners of backstage Broadway, hitting one character after another in its introduction of Alejandro González Iñárritu’s funny, fast-paced film. We begin with Michael Keaton, who leads the film as a psychologically fragmented blockbuster has-been. We jump to Edward Norton, who ups the conflict as a Method thespian whose art expenses his humanity. We hit Zach Galifianakis, who levels the mood as a harried producer serving as consistent comic relief. And inevitably, we find ourselves with Naomi Watts and Andrea Riseborough… who are also there.

Now, Birdman is a stellar piece of work, impressive principally as an endeavor in directing, but is no slouch on the page nonetheless. Through Keaton’s Riggan Thompson and Norton’s Mike Shiner, it tells a story of the corrosive worlds of art and entertainment, the toxins of fame and prestige, and perils of running through Times Square in your underwear. But Birdman rears a bit of a blind spot when it comes to a few of its female characters. Watts and Riseborough get nothing much to do but deal with the troubled, complicated, and wholly more interesting men around them.

Their characters too are performers in Riggan and Mike’s Broadway production, What We Talk About When We Talk About Love, though are defined principally by their relationships with the males in question. Watts plays the put-upon girlfriend of Norton’s Mike, and a constant casualty in his war for creative liberation. Riseborough is the same to Keaton’s equally unstable but markedly less abusive Riggan, suffering beneath the weight of his desire for greatness.

Neither character begins as a victim, with Watt’s Lesley introducing as sharp and crass, and Riseborough’s Laura confident and stoic. But we see very little of them between salutations and the inevitable focal sequences to which each character is beneficiary in Iñárritu's kinetic documentation of the dressing room alley, and are treated to somewhat unflattering material once their personal climaxes hit.

Whereas these back room scenes are handed to Keaton and Norton in the interest of diving deep into each man’s relationship with his craft or psychoses, Watts and Riseborough are allowed little more than tearful complaints about how hard their damaged beaus are making life and love these days.

Their scenes, especially in these later chapters, are ultimately wasteful. Wasteful of time that could be more captivatingly spent with Riggan or Mike, the superior characters. Wasteful of the talents of Watts and Riseborough, terrific actors by anyone’s note. And wasteful of perspective, robbing Lesley and Laura of the opportunity to provide their own unique, intimate takes on the carnivorous play that keeps its hungry eyes affixed on the actors in question. And with so many vivid fallbacks, you’d have to conclude that the only motivation behind these Lesley/Laura scenes was — spoiler alert — to get Watts and Riseborough to kiss. I’m not entirely sure why it happens, but it does. And it almost seems like the only reason Iñárritu wrote them into the story at all.

But I can’t accuse Birdman of complete servitude to the male gaze, as one of its very best characters is assigned to Emma Stone. Playing Riggan’s hostile, drug addicted, emotionally garbled daughter and professional assistant Sam, Stone treats the audience to some of the strongest and most entertaining bits in a film already dense with charm and humor. In fact, Sam bats a range between causticity and vulnerability that might surpass even her father’s, or at least rival it. A good deal of this is owed to Stone, but also to the character that Iñárritu gives her.

Still, it says something that the only female role of any merit is, first and foremost, a daughter. Why can’t a woman belong to this story, this world, without “belonging” to a man that occupies it? Why, if not a hero’s daughter, must a woman be bound by her romantic desperation for him (or his villain)? Why can women in Birdman’s world seem only to subject themselves to conversations about love, pregnancy, and heartbreak? Oh, and why must full scenes be sculpted in the interest of seeing them kiss? That’s the biggest head-scratcher.

More like this
Sandra Bullock, Girlboss Extraordinaire
By Matt Harkins & Viviana Olen
Watch The Dramatic First Trailer For Netflix's Jennifer Lopez Documentary
By Alyssa Lapid
What Does Doctor Strange’s Third Eye Mean?
By Arya Roshanian
What’s New On Netflix: A Victoria Justice Rom-Com & The Return Of David Letterman
By Arya Roshanian
Get Even More From Bustle — Sign Up For The Newsletter