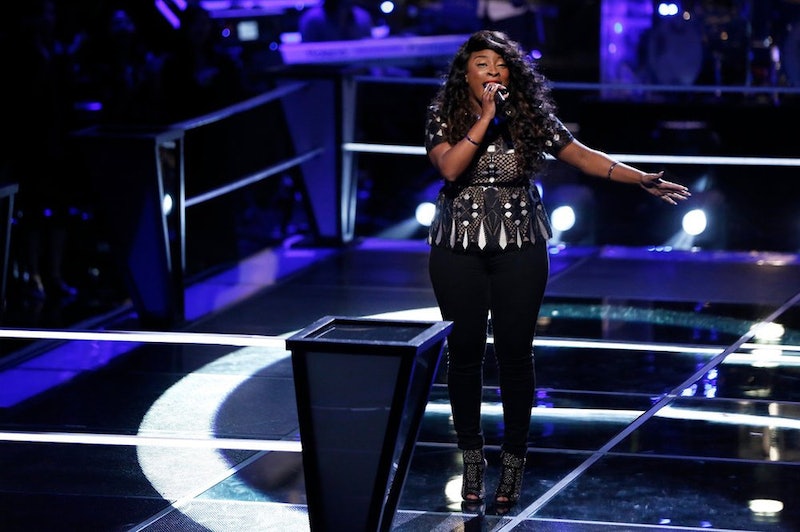 It's very late in the game for judges to be fighting over artists, but it happened in the final hour of "The Voice" battle rounds. Church-singer Toia Jones brought out the tension between coaches Adam Levine and Gwen Stefani after being let go by coach Pharrell. Jones battled DaNica Shirey to Beyonce's "Halo," and it was one of the best and most emotional performances of the season so far. Shirey deserved to win, but the judges were smart to steal Jones.

Jones had an emotional series of rehearsals with Pharrell and guest-coach Alicia Keys. Unlike other songs that are performed during the battle rounds, "Halo" had a deep meaning to both singers. Jones and Shirey were both singing the song in honor of their fathers. Jones even broke down in tears after one run-through of the song, proving to coach Pharrell that she needed to be in this game and simultaneously winning over the hearts of viewers. The song and the meaning behind it gave both singers something to fight for during their performances, which made it extremely tough to determine the winner.

In the grand scheme of things, Shirey is the better singer. Her sound is more polished and she seems very at ease on the stage. I can see her going very far in this competition, if not winning the whole thing. What sets Jones apart, though, is her ability to use her emotion to better her performance and wow the judges.

But let's talk about the steal for a minute. Adam Levine was already welcoming Jones into his team when Stefani hit her button. That's just mean, girl. Stefani has played by her own rules this whole time: pulling the "girl card," handing out T-shirts, jumping on-stage and singing while trying to win over a performer, etc. It doesn't surprise me that she would pull a move like this. It was smart of Jones to pick Levine, even though she definitely would have benefitted from being on Team Gwen. Levine has a fabulous track record, and if he can trigger the emotion Jones had on-stage tonight in weeks to come, we can definitely expect to see her sticking around for a while.