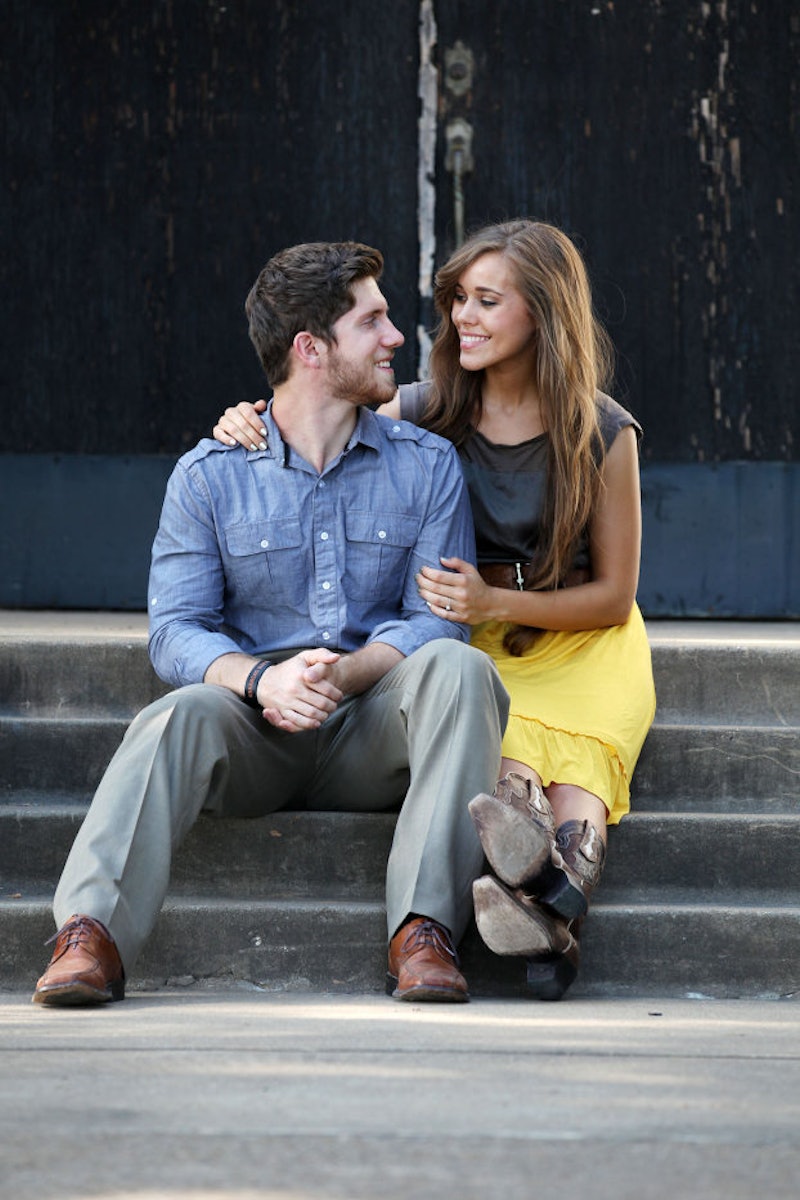 In case you haven't noticed, the Duggars from 19 Kids and Counting do the whole dating thing a little differently. Instead of engaging in the messy business of going on dates until they fall in love, and falling in love over and over again until they finally manage to find "the one," they go about it in a much more businesslike fashion. Emotions are taken out of the equation in the beginning, and instead, their relationship is a courtship that begins sort of like a contract — one that's been written and signed by Jim Bob.

Essentially, ol' JB will find a suitable match for his daughter or son, and if all involved parties are happy with the match, then they get to know each other in a courtship. Once the couple has been matched, the courtship is where emotions start to come into play. The two partners begin to get to know each other under the watchful eyes of a chaperone. Soon after, if that goes well, they get engaged — still being supervised by a chaperone the whole time, of course.

All of this goes down in a matter of months, and it's become a proven method for three Duggar kids so far: Josh, who's been married to Anna for six years, the recently wed Jill, and the newly engaged Jessa. But certainly, courtship can't be 100 percent foolproof, right? Eventually, Jim Bob has to create an unsuccessful match. So what happens when a courtship doesn't work?

As Starcasm has pointed out, this has happened before to the Duggars' very close pals, the Bates. Their son, Zach, courted a girl named Sarah Reith in 2011, but the courtship ended up not working out. According to mom Kelly Bates, "Sarah decided to end the courtship several months after it began." And I guess Zach ended up being OK, because like at the end of any relationship, he put himself back together again and eventually found new love. Today, he's married to Whitney Perkins, and by the looks of Instagram, they seem to be pretty happy together and are expecting their first baby.

The thing is, courtship was pretty much designed to ward off heartache — and as Michelle told Today, that's a big part of why the Duggars swear by it. She said, "Before you get emotionally attached, you want to know who they are deep inside. That’s easier when you have more eyes looking out for you. There are a lot of things you can learn from not pairing off alone.”

But if a courtship doesn't end with a ring, I can't see how anyone's heart wouldn't be broken, no matter how many family members were looking out for you. In any relationship, even one with a ton of chaperones, you're at risk of getting your hopes up — especially one that's basically intended to end in marriage from the very beginning, like a Duggar courtship. Your parents can't protect you from that, not even if they're Jim Bob and Michelle.

Has a Duggar courtship failed in the past? None that we know of. However with 16 children left in the Duggar home, there has to be at least one future courtship that doesn't end in an engagement. Otherwise, Jim Bob might to want think about switching careers and becoming a matchmaker.

More like this
'Love Island's Gemma & Luca Have Very Different Ideas About Their Break Up
By Frances Stewart and Sophie McEvoy
Billie Eilish Has An Exciting Relationship Update About Her Boyfriend
By Grace Wehniainen
Who Is Pete Davidson Dating? He "Courted" Emily Ratajkowski At A Knicks Game
By Jake Viswanath
We’ve Got A Text! Another 'Love Island' Series Is On The Way
By Darshita Goyal
Get Even More From Bustle — Sign Up For The Newsletter