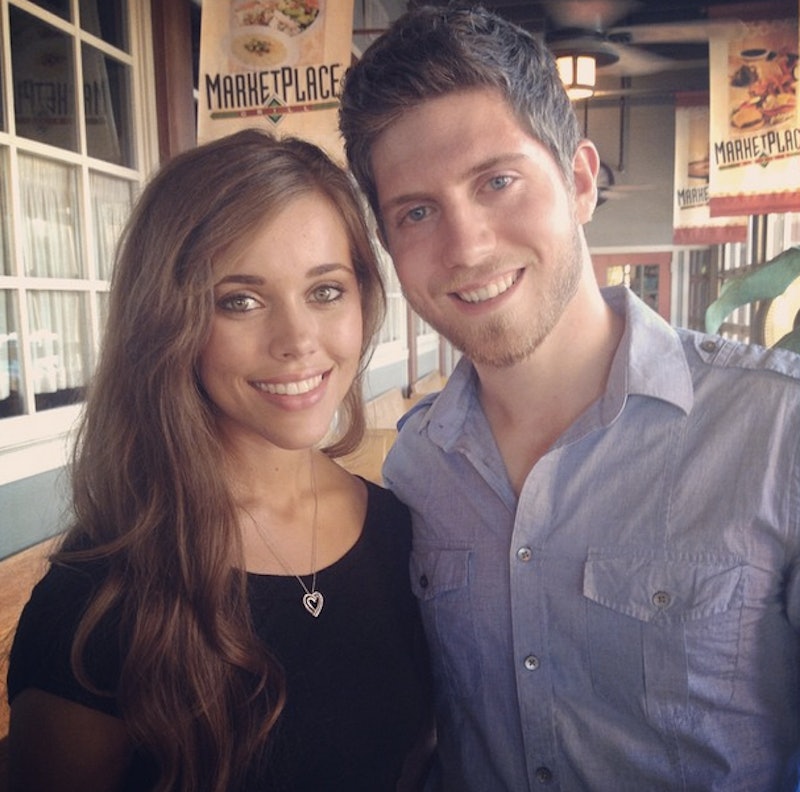 It looks like our favorite 19 Kids and Counting are growing up: case in point, Jessa Duggar recently got engaged to Ben Seewald, and they'll be getting married on Nov. 1, which will be immortalized on a 19 Kids special. Even though Jessa and Ben have been dating for ages in Duggar terms (just over a year), this still feels like a surprise, right? These two seem so painfully awkward. The Duggar courtship rules, which they would of course be quick to say are completely chosen independently by each couple, forbid any kissing, or even any touching more serious than a side hug.

But once Jill and Derick got engaged and decided to hold hands, they seemed so happy and excited to be together. Jessa and Ben seem a little different. Ben seems very excited, almost giddy, that he gets to be with Jessa. But Jessa doesn't seem like she's totally aware that she's going to be married in just a few months. Jessa always seems a little passive and out of it. She's got that hesitant "yeaaa…" at the idea of Ben, and the idea of most things.

Jessa posts photos on Instagram almost every single day. Besides one extremely disturbing post in which she compared abortion to the Holocaust after visiting the Holocaust Museum, Jessa's Instagram is mostly filled with pictures of her sisters, brothers, cross-county locations, and a few pictures of her and Ben side-hugging. She did, however, already change her handle to "JessaSeewald" from "JessaDuggar." Could her Instagram hold the code to how she's really feeling about Ben?

Their Chaperone Isn't the Third Wheel

Jana doesn't look like the tagalong here, she's got the same great big smile as Jessa does — it's Ben who looks like the third wheel.

They Both Take Their Religious Beliefs Very Far

On the other hand, both Ben and Jessa seem like extremely evangelical Christians who never miss an opportunity to speak out about their faiths. I mean, she used the Grand Canyon to stump for intelligent design, he writes horrible Facebook posts comparing abortion to the Holocaust (hmm, sounds familiar). Maybe they are meant to be together.

Examine Jessa's big-eyed stare at the end of this video. Just a silly face? Or could it be a wordless cry for help because she had no idea she was engaged to a man who loved demolition derby quite this deeply?

Oh, sweet, they found a heart-shaped leaf. But that leaf looks kind of old and rotting. Could be a metaphor for the rotten foundations on which they've rested this engagement...

Maybe She Was Just Looking for a Name Change

Even before getting married, she's changed her Instagram handle to @JessaSeewald. It could be an attempt at going under the radar — Jessa Seewald only nets 174,000 Google hits, while "Jessa Duggar" gets over a million.

Look it can't . It's a little suspicious that somehow every Duggar kid happened to pick their soulmate on their first date. I'm sure if they go through with the wedding and marriage that they'll become more comfortable with one another. But at the moment, Jessa and Ben seem more like unlikely lab partners in freshman Earth Science than a newly engaged couple.