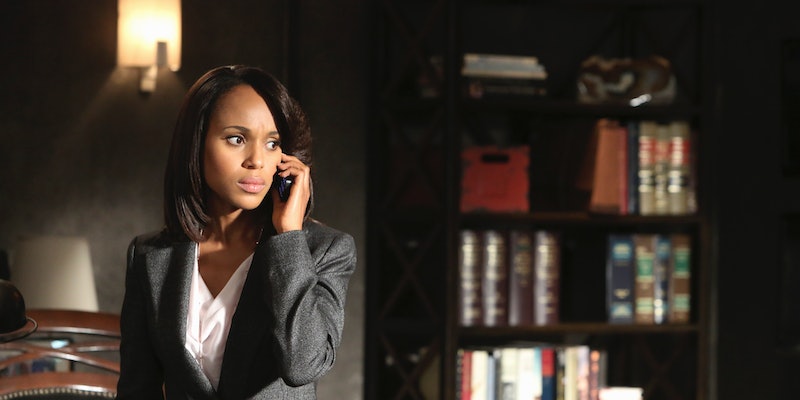 I have an embarrassing confession to make: I live a rock's throw away from DC, and I only just started watching Scandal. For the past few years everyone has been on my case about it, singing the praises of the badass that is Olivia Pope, and every time, I swore I'd watch it only to somehow bet distracted by reruns of sitcoms instead. Maybe I was afraid. Maybe I understood somehow, even then, that this show would have the power to overtake my life. Because once you start watching Scandal, there's no going back.

It started over this past weekend, when I shamelessly binge-watched the first two seasons. Of course, I know what's been going on in Season 4, from watching over people's shoulders when they're playing it live. (Even when you're not watching Scandal, trust me, you're watching.) The mastery of showrunner Shonda Rhimes, combined with Kerry Washington's ability to deliver lines as if she is actually reaching out and stabbing your heart through the screen make the show impossible to resist. And because I have no boundaries in the blur of fiction and reality, I am now way too emotionally invested in all of these characters, to the point where I am screaming into the void of Netflix on almost every episode that has ever aired. I've noticed, though, that the emotional roller coaster tends to have a pattern. And while it in no way ever fully prepares me what the show will do next, I at least have some idea of what emotions will happen to me as soon as a Scandal episode begins:

Is there anything Olivia Pope can't do? Can I nominate her for queen of the universe? Everything that comes out of her mouth is whip-smart and gold and I feel like if I could talk to her for five minutes about my life goals, she could help me plan out the next thirty years, possibly without blinking. (Side note: my mother once met Kerry Washington, and I'm still not over it.)

I need to hit a shopping mall and get an all new wardrobe. This instant. Because The Limited actually has an Olivia Pope inspired line, just in case you needed more reasons to blow your paycheck this month.

Wow, who knew politics were this crazy?! I mean, I interned in DC for a whole summer and the only crazy thing I ever saw was a woman getting her phone stolen by a runner outside Metro Center. (Yes, she did get it back. Someone caught the guy and we all cheered. It was all very dramatic for us regular mortals.)

Politicians: They're just like us! Except the part where they have frequent sex scandals and pay to murder people and hide their love children. But, like, other than that.

Wait, for real, though, does this kind of stuff happen? Is Obama frequently having to deal with all this Gossip Girl type drama from the oval office while he's trying to run a country? Are people being bugged and recorded and murdered in, like, every other building on my walk to work?

Man, this looks so stressful. Poor Olivia. I should poor myself a glass of red wine, too.

Wait, how can I be weirdly sexually attracted to almost everyone on this show?

WHY CAN'T EVERYONE JUST BE HAPPY? Forget leading the free world, obviously true love conquers all. (Reason number 1462 why I would make a terrible president.)

Oh, look, a secondary lead character made a funny, wry comment. Everything's going to be fine.

NO, EVERYTHING IS NOT FINE. PLOT TWIST. HOW CAN I NEVER SEE THIS COMING? Also how do you get red wine out of...everything? Asking for a friend.

I don't have fingernails anymore, and I blame this show.

SOMEBODY HAS A GUN. (Somebody will almost always have a gun.)

Ugh, I couldn't help but notice how classy Olivia's outfit was, though. If you're gonna get your life threatened every other day you might as well get threatened in style.

At this point they've either saved the day or semi-saved the day, and someone says something profound. I, for instance, am a huge fan of Mellie's speech last week to her daughter about sex.

I just want to hug everyone on this show and tell them it'll be alright. Even though it totally won't.