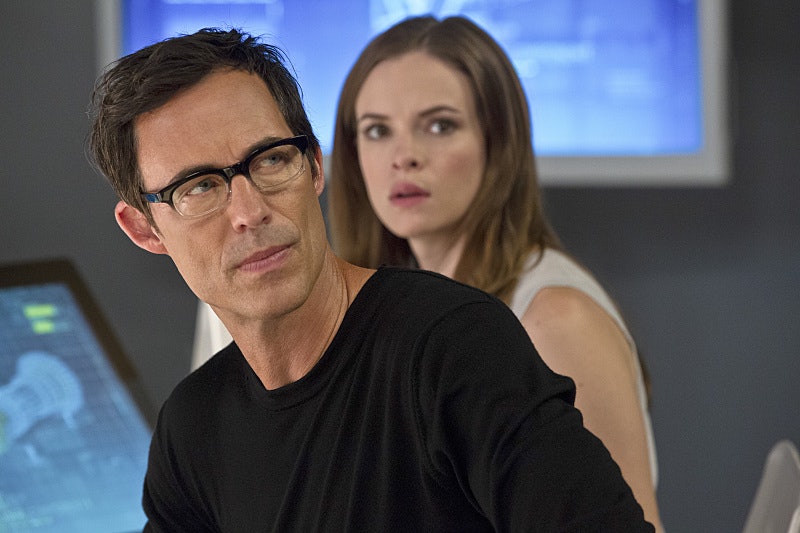 There's a classic superhero storyline at the core of The CW's new series The Flash: the struggle of good versus evil. And while we're only going into the third episode of the series, we've already seen some of the classic bad guy plotlines, like bank robbers and menacing revenge seekers. But we were introduced to an interesting twist thanks to the character Harrison Wells. Guys, who the hell is he? And what does he want? I don't think Wells is based on any DC Comics characters, or will ever be revealed to be one under a different name. No, I think The Flash's writers simply created him with their own imaginations.

Now while it's not been confirmed that Wells is an official villain (mostly just because he hasn't physically gotten in a kerfuffle with our hero, Barry Allen), it's pretty easy to tell he's not an official good guy either. The premiere episode ended with him going off to a secret room, standing up and walking out of his wheelchair, and then powering some news hologram about Barry Allen's disappearance in the year 2024. The following episode ended with him stabbing Simon Stagg because he threatened the Flash's safety. Hmm, I'm seeing some red flags here.

As per usual in the comic series fandom, The Flash fans have already run their diagnostics. Theories and speculations have been made that range from the idea that Harrison Wells may be the Reverse-Flash before he took on his villain namesake to the possibility that he's the Flash from the future. My theory is something else entirely. Wells is not a character featured in the comics, but one created specific for the series much like Jada Pinkett Smith's Fish Mooney in Gotham. Described as a "rock star in the world of physics," it's not likely that Wells will be the Reverse-Flash or Barry Allen from the future. Besides, the second episode ended with Wells stabbing Simon Stagg, and sweet Allen could never do such a thing.

Wells is probably from the future, and likely knows a lot more about The Flash than he's been leading on to Barry Allen and the gang. We just don't know what it is he wants from Allen specifically. Wells is aware there are other metahumans, however his interests lie specifically with Allen. That means he knows something about Allen or has been offended by Allen in the future and wants revenge, justice, or to steal The Flash's power. That sounds like grounds for some arch-nemesis villainy doesn't it?

While it seems Wells will become a villain, he'll likey be one whose mask doesn't come from the comics. His story unfolds in a very sneaky manner and we never know whether or not we should trust him. That kind of moral complexity suggests that Wells' villainy will be one fans will have to question. Additionally, the explosion of his particle accelerator is so directly related to Allen's birth as a superhero that it seems he's here to stay, though Wells' plotline may not be one we'll visit week to week. I think the struggle between Wells and Allen will be slow to unfold so that it can continue for seasons to come. Until then, I guess we'll have to keep watching to see.