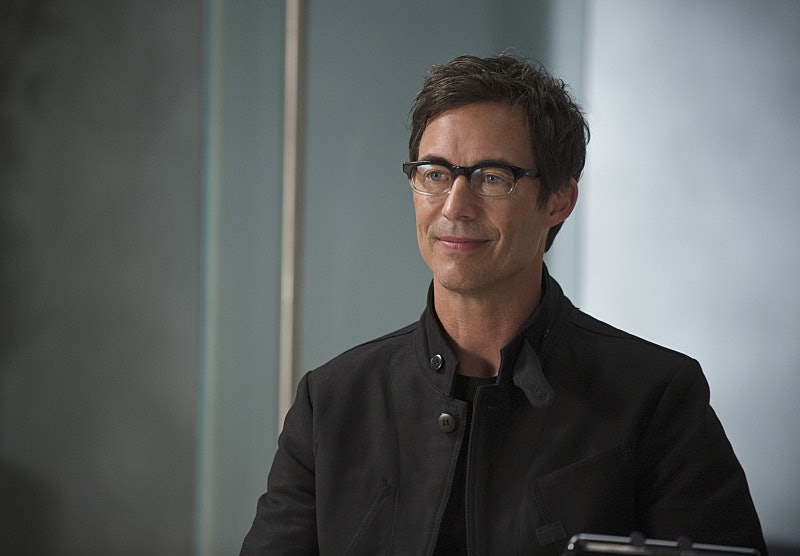 The Internet was aflutter with theories for The Flash before it even premiered on The CW. How could it not be? When a show is based on comic books there's so much source material to draw from, and everyone is always some sort of double/triple agent who will one day grow up to be the villain or superhero. So it was no surprise when The Flash introduced new character Harrison Wells and everyone immediately jumped on different theory trains. However, before you hitch yourself to one spoiler wagon or another, consider the fact that Wells might not be anyone we've read about before. Really. Harrison Wells is not a character from DC Comics, and I don't think he's a stand-in or pseudonym for a DC character either. We're probably wracking our brains over his origin story for nothing, because he might not actually have one. If we're considering all other — often strange and confusing — options, we have to throw this one into the pile too.

Over the past two Flash episodes we have learned a lot about Wells, and yet it still feels like we've learned nothing at all. For starters, he's a brilliant scientist who uses a wheelchair and says he cannot walk, but is revealed to actually be faking his condition and can stand up and get out of the chair whenever he wants — like to kill Simon Stagg. He also has a secret lair in S.T.A.R. Labs with strange markings on the wall and a newspaper from the future. Nothing we've seen in his character lines up with any other character in the DC Universe (for one, uh, Staggs is still very much alive at last glance). He could simply be created specifically for the show. Maybe there was a big dartboard in The Flash writer's room, with all sorts of different characters and traits, and the writers just threw darts at it, and whatever hit became Wells. He's honestly unlike any DC character already written.

The common theories are that Harrison is either Reverse-Flash, Eobard Thawne, Malcolm Thawne, or Professor Zoom, or all of those people at the same time. It's honestly really confusing. It's so confusing, I've decided to lean towards the idea that he's none of them. I really don't think the team behind Flash wants us to confuse us that much; this isn't Pretty Little Liars. And there's just so much speculation out there right now, it makes my head hurt. Why can't we just accept Wells as a new character, and then figure out exactly who he is one episode at a time?

Clearly, Wells has something to do with time travel. Let's consider the fact that Barry's cosmic treadmill (which allows him to time travel in the comics) was hinted at in last week's episode, and that it's going to take a whole lot of explaining if/when it is ever fully introduced to viewers. I'd rather have plain old Wells explain it to me than Professor Zoom/Eobard Thawne/Malcolm Thawne, you know? The Flash dates back to the 1940s. It's about time fresh air was breathed into these characters that are already over half a century old. I hope Wells is just the first of many more to come.

Flash's fellow CW friend, Arrow, did the same type of thing. Thea Queen was completely created for the show. You don't see anyone up in arms over the fact that suddenly Oliver has a little sister, right? So why can't Barry get a brand new mentor? Can't we be excited at the possibilities of an original character inserted into an already established comic world?

Let's stop trying to pigeonhole Wells into any one character, and accept that he's mysterious, might be lying to us, and take it from there. Maybe his story will get even stranger — that's what is so exciting. We don't know what's coming yet for Wells. It'd be perfectly fine with me if Wells just turns out to be Sheldon. It'd make just about as much sense as him being a supervillain from the future.