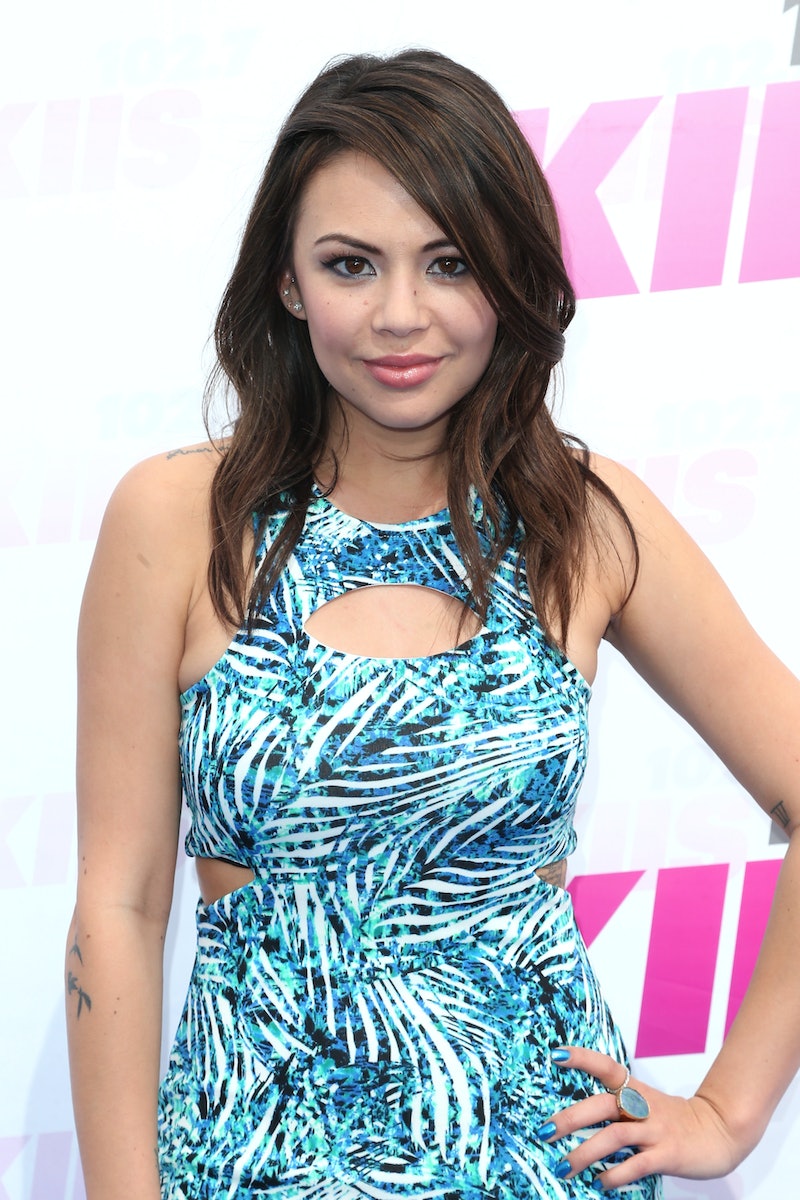 I honestly didn't see this one coming, but Janel Parrish is now single. Of course, when Dancing With the Stars fans heard this news, many jumped to conclusions. Many pointed to the showmance she has going on partner Val Chmerkovskiy and said that Parrish dumped boyfriend Payson Lewis for Val. Others claimed Lewis broke up with her because of Val.

First of all, stop. It's so rude for people to celebrate and speculate about the end of a relationship, especially since Janel Parrish and Payson Lewis's relationship was so happy and well, cute. On Thursday, Lewis announced the breakup on Instagram by posting a photo of him and Parrish. He included a pretty flattering, sweet caption so it seems like the pair at least parted on good terms. "All good things must come to an end. Thank you for the happiest year and a half of my life," he wrote. "I will always love you @janelparrish and I wish you nothing but the best. Forever #teamjanel"

Lewis didn't go into the reason for the split, so it seems kind of unfair to speculate or place blame on anyone. It could simply be a coincidence that they broke up while all of these DWTS romance rumors are going on. Hopefully fans won't keep insinuating that Parrish cheated or that Lewis was jealous of Chmerkovskiy or anything like that.

But what does this breakup mean for the future of Janel Parrish and Val Chmerkovskiy's friendship? I have a sneaking suspicion that he may have real feelings for his DWTS partner, but that doesn't mean we'll see them together. Parrish may be available, but I don't think she's ready to jump back into another relationship. All week on social media, she's seemed pretty melancholy. She didn't seem like someone who instigated the breakup, and I highly doubt she did it for Val.

Undoubtedly, Parrish saw some of those type of comments floating around and she took to Twitter in an effort to make it stop.

Meanwhile on Instagram, she posted a few messages about life knocking her down and how she needed her sister more than anything at the moment.

On Twitter she admitted the week had been emotional.

None of this sounds like words from a woman who chose to end her relationship, and she likely needs some time to recover from this one before she jumps into another. We probably won't see Janel & Val as a couple soon — or maybe ever, and that needs to be OK with fans. This is her life, not theirs, and she deserves some time to heal.