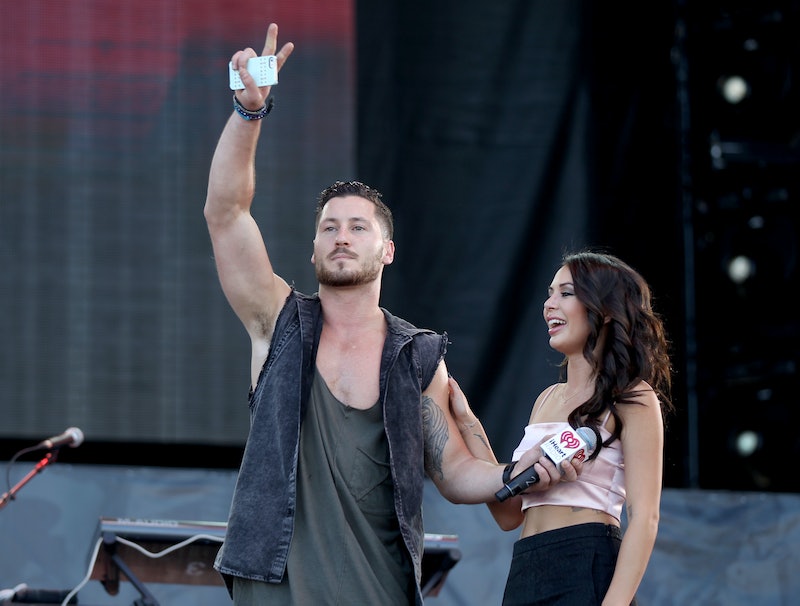 Ah, Janelskiy, there's a place for you, a time and place for you, but unfortunately until Janel gets rid of her boyfriend, it's not now and it's not in the Dancing With the Stars studio. (Pardon my corny West Side Story reference.) Unless you're the Scrooge of all things dancing and shut your eyes to such things, you'll know that people have been questioning the relationship between Pretty Little Liars star Janel Parrish and her partner Val Chmerkovskiy since week one of DWTS Season 19. Even if you don't watch the show, it's impossible to scroll through any social media platform without noticing the flood of pictures and videos of the dancing couple. But the problem is just that. Now that Janel & Val have a perfect score under their belts and gained themselves a massive fan base, it's possible that Janelskiy is officially overdoing it on social media.

Because Janel has a boyfriend and Val is committed only to himself for the moment, the couple is clearly faking the romantic chemistry (at least from where I sit). Backgrounds in performance can certainly help two folks amp that angle up. Plus, DWTS pro Allison Holker confirmed to Bustle that Janel and Val are not a couple at all.

Now that it's out in the open that the two will not be getting together any time soon, it's time to give up the social media overkill, guys. I'm not saying Janelskiy is trying to win over DWTS fans with an embellished relationship the way Maksyl did (some folks certainly are, though). But it would probably be more fair to Janel's boyfriend if the two weren't constantly planting false hope for 'shippers on their Instagram and Twitter feeds.

EXIBIT A: SEVERAL RACEY INSTAGRAMS IN LESS THAN 24 HOURS

Seriously, though. Five Instagrams... in less than 24 hours. That's overkill for any celebrity, but for all five to be with the same guy? In her defense, each of these was absolutely Instagram-worthy. But I'm thinking I would've stuck with that sexy sunset shot, added in a #nofilter #Rumba #Janelskiy and called it a day.

EXIBIT B: VAL LIKES TO #REGRAM. A LOT.

I'll keep the regrams here down to a minimum. But trust me — there's an excess of repeats.

EXIBIT C: THEY FLAUNT BEING SHIPPED

Payson Lewis, who? Janel's Instagram reads like a Val Chmerkovskiy Encyclopedia and Val's isn't exactly sans Janel Parrish either. Janel and Val supposedly kissed backstage on more than one occasion, but they don't seem to be so upset about it. Instead, they like to keep the questions brewing amongst the fans. Their social media accounts are basically the reason most of these photos have gone viral. I get it — keeps the votes coming, raises the suspense, but how long can Janel's boyfriend Payson Lewis really put up with it?

EXIBIT D: THEY JUST LOVE IT WHEN THEY'RE SO DAMN CUTE.

They just can't help it. They look perfect together, they clearly have a chemistry off set as much as on, and I know more than anyone how hard it is not to Instagram when a cute picture is right there for your filtering pleasure. It's just that it's — pause for dramatic effect — getting a little old. At this point, I feel like I'm third-partying some intimate occasion every time I sign online. #DoLess