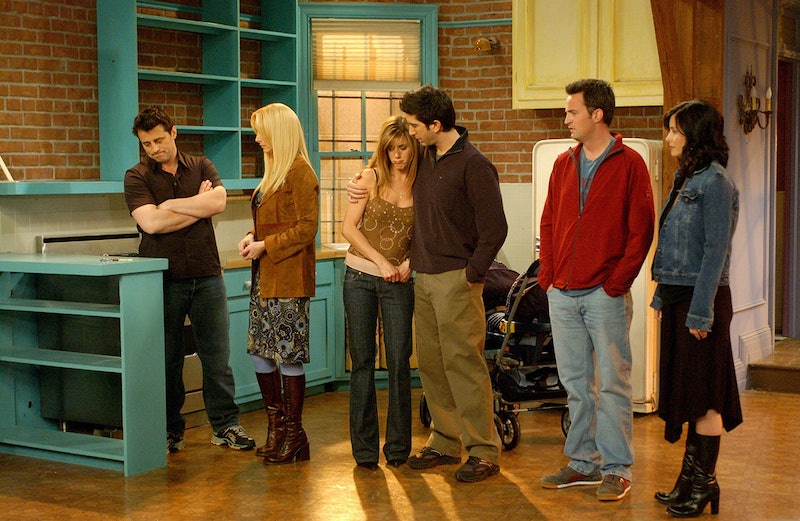 It’s been over a decade since we’ve bid farewell to Friends, but thanks to the almighty glory that is Netflix, we can watch the entire Friends series from start to finish as many times as we please (starting in January). Think of all the Thanksgiving episodes, the flashback episodes, the ones where Ross has a son and then magically doesn’t because of the power of writing (or bad parenting, take your pick). I was just a kid when Friends premiered and now as I inch ever closer to 30, the show hits a little closer to home now more than ever. Sure, the size of apartments and incomes to which they are maintained are still ludicrous, but the multitude of dating disasters, the pressures of careers, marriage, and kids still hold up.

Like most series that run too long, Friends went at least two years past its expiration date. However, it was the centerpiece of NBC's Thursday night “Must See TV,” so it stayed all the way through 10 seasons. The Ross and Rachel will they/won’t they storyline was dragged out so much that it stopped being charming and just became annoying. You’d think that once they had a kid together, the whole thing was settled, but nope — producers refused to let them be happy. They even dragged poor Joey into the mix and had a totally unnecessary Rachel/Joey “love story” thrown in.

Despite the shaky last few seasons, the two-part finale did manage to wrap things up pretty nicely for our six favorite friends. However, much like A League of Their Own , no matter how many times I watch it and knowing how it all turns out, I can’t help but roll my eyes at the ending.

Here’s how Friends should have wrapped.

It turns out, the producers did consider leaving Ross & Rachel up in the air or having them not actually end up together. After 10 years of clearly being in love with each other with some “breaks” and other love interests thrown in the mix, it was glaringly obvious to fans that no one was going make either of them happy except each other. Had they not ended up together, it could have been worse than the abysmal How I Met Your Mother finale. The main issue here, though, is that their relationship keeps Rachel from pursuing a dream job opportunity in Paris. If they would have just gotten back together and stayed there, then maaaaaaybe this wouldn’t have to be an issue. Not only was it crappy to make Rachel decide between love, family, and a career, but also to put poor Emma in a transatlantic will they/won't they that could have possibly never ended. I know it upped the dramatic ante, but it felt a little unnecessary.

I’m glad Chandler finally grew out of his commitment phobia and Monica got the family she always wanted. The writers teetered a little too close into having Monica scare Chandler into all of these things. And surprise twins? Oh good, more of a reason to push the "Chandler is afraid of adulthood" joke. C'moooooon! Ultimately all of their decisions and leaps were made together. These two really loved each other, I’m just bummed they had to leave New York. I just hope Monica didn’t get stuck working at an Applebee’s. I also would have loved to see Chandler land in a career he actually cared about. When he works as an intern for an ad firm, it seems more than a little cruel. He's already spent the entire series having jobs no one can remember, nor does he ever really care about. He does get promoted to junior copywriter, but still.

She married Paul Rudd! OK, that is pretty much a fairytale ending for almost anyone. The real focus of the finale was Ross and Rachel, followed by Monica and Chandler and then Phoebe and Joey were left a little in the dust. Phoebes did at least get a nice bow wrapped around her own story. She was a ringer for Ross when they arrived at the airport to try and stop Rachel by claiming that the "left phalange" of the plane was broken. She was perhaps the series’ most lovable and selfless character (c’mon, she was a surrogate for her own brother) and it felt like she was just a supporting role in the end. I would have much preferred the last shot being of Phoebe setting up her gear in Central Perk and singing one last rousing rendition of “Smelly Cat” or maybe a lullaby to her new nieces and nephews. Sure, it would have been cheesy, but that’s what finales are for.

JOEY. Poor friggin’ Joey. At the end of the series he’s left with two birds, a broken foosball table and all of his best friends coupled off and starting families. I suppose this all made way for the Joey spin-off, but truly that should have never happened to Mr. Tribbiani or Mr. LeBlanc for that matter. I suppose in a way, as we all transition from twentysomethings into adults, we all feel a little like Joey at the end of Friends. His career is up in the air, his love life is “DOA” and everyone else seems to be moving onwards and upwards….and this was all before the economy crashed. He even gave Ross the OK to pursue the woman he loved. Cripes Marta Kauffman and David Crane, couldn’t you at least given him SOMETHING? He didn’t have to go back to another reincarnation of Dr. Drake Ramoray, but it would have been nice to see him at least a little happier. Maybe the cameras pan out and we see him on a billboard for an ad for something he truly loves, like sandwiches.

All in all, the show ended with quite a lot of closure and things went just as fans probably could have hoped. Though Phoebe and Joey deserved a little more love in the end, at least the producers didn’t give fans The Sopranos or Seinfeld treatment. We knew where these guys were headed, and for the most part, it was to happy places. Now if you’ll excuse me, I have a couch and marathon of Friends to attend to.

More like this
Netflix Reveals First Look At Wednesday In The 'Addams Family' Spinoff Series
By Bustle Editors
Courteney Cox & Jennifer Aniston’s Latest 'Friends' Revival Is Everything
By Darshita Goyal
What Does Nancy Jo Sales Think Of 'The Real Bling Ring'?
By Arya Roshanian
12 ’90s Movie References You Missed In 'Do Revenge'
By Radhika Menon
Get Even More From Bustle — Sign Up For The Newsletter