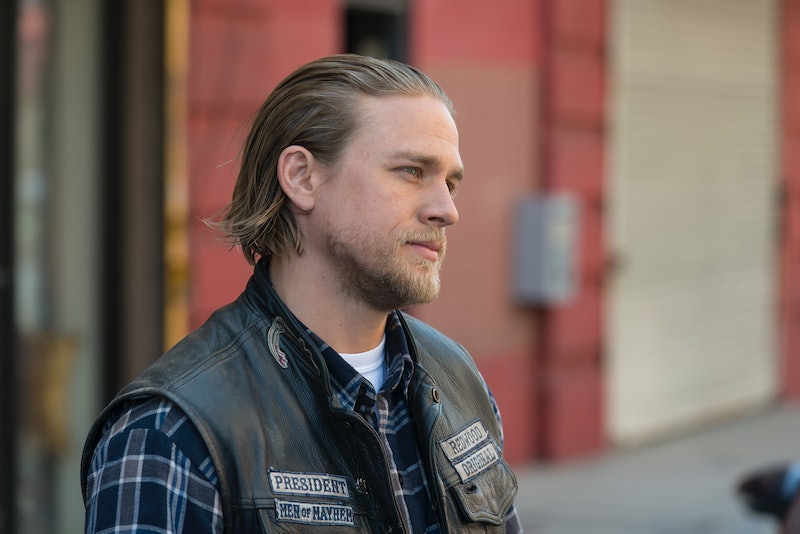 The biggest question Sons of Anarchy has faces in its nearly seven complete seasons is finally coming to a head. In the promo for SoA Episode 7, "Greensleeves" (below), it's clear that we're supposed to wonder whether or not Jax knows Gemma killed Tara. In fact, the promo itself almost declares that he does know. But (and this is a big "but"), we have to consider the fact that there are still six whole episodes of the final season left once we finish out the final moments of "Greensleeves," and it doesn't seem very likely that Kurt Sutter would let the season's biggest cat out of the bag that soon.

Of course, beyond the promo, there's one other huge reason it seems that SoA might have spilled Gemma's secret already: one very desperate ex-SAMCRO brutha. Juice has lost his battle with denial and he's now in the clutches of the club he wanted back so desperately. Yet, in the images from Tuesday's episode, Juice is markedly not dead. He's not bruised and bloodied. In fact, he looks kind of alright, accepting his SAMCRO vest back from Jax and exchanging some rather civil sorrys with the embattled club leader. How the hell did Juice make it to that point unscathed, when even his buddy Chibs was warning him that he was D-E-A-D if the club ever caught him?

The obvious answer is that he traded the truth about Gemma for his freedom, and that's certainly what FX's marketing department wants us to think. The problem with that logic is that it assumes a great deal about how Jax would handle the revelation that his mother killed Tara. As someone who has watched Jax for years, I don't think Jax would be able to get back up on his feet, in the matter of an episode, and calmly release the club's betrayer before trekking off to have the club take out his mother. We're talking about the biggest relationship in his life and the worst news he will ever hear. This isn't something you deal with in just one episode.

Plus, there's the issue of assuming that Juice telling Jax the truth would actually qualify as a trade for freedom. Juice has betrayed the club approximately one thousand times. (OK, really, it's a handful, but they talk about it so much that it feels like approximately one thousand betrayals.) But, in order for Juice to trade for freedom, he would have to have something really, really beneficial to the club — something beneficial enough to make all his past wrongs right again. Squealing on Gemma is not that something.

If Juice did tell Jax about Gemma, it would be yet another betrayal revealed: you know, the part where he lied to the club and Jax about who really killed Tara, and therefore helped the club get into the pointless, bloody, senseless war it's been fighting for six episodes? That confession wouldn't save Juice, it would condemn him once and for all.

One thing is for sure: Jax will find out eventually. It simply doesn't make any sense that he would find out this way, this soon.