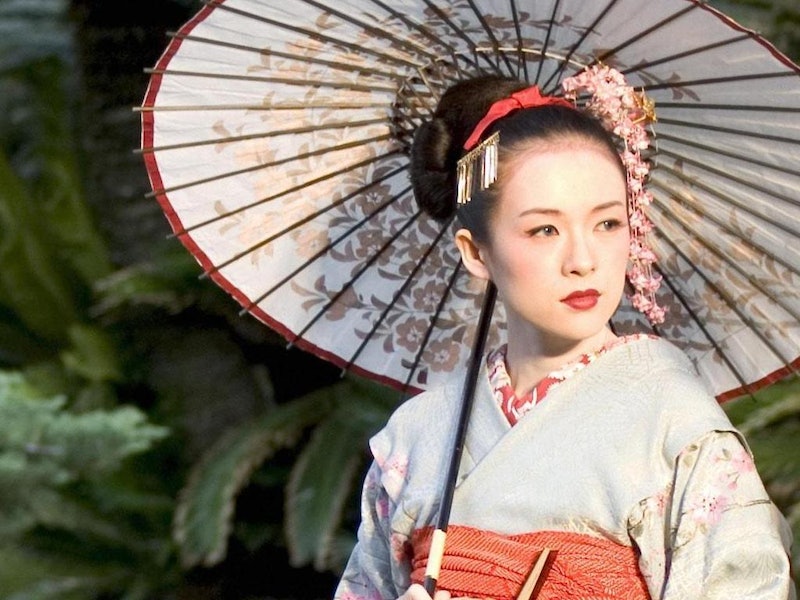 Call me shallow (I prefer aesthetically driven), but some of my favorite reads have been memorable because they’re so damn stylish. I mean, I do find navigating Henry James's esoteric, academic prose a satisfying feat — but what propelled me through his novel The Wings of the Dove was less the dense passages on social politics than it was absorbing Milly Theale's turn-of-the-century sophistication. And I am unashamed to admit that I, a 22-year-old woman, sometimes re-read my old Baby-Sitters Club paperbacks just to marvel at Claudia’s badass, perfect-for-Halloween ensembles.

I don’t believe I’m the only dedicated book-reader who’s a little obsessed with literary style. As a kid, I couldn’t fully immerse myself in a story until I’d designed the setting’s complete floor-plan; each of the characters’ facial features and vocal cadences; and what everyone was wearing in each scene. Weird, maybe, but I think I was onto something: a character’s physical makeup acts as a mirror to her subconscious, revealing subtleties in character that the author doesn't need to articulate.

Clothing, both in books and in life, is a voluntary armor. How these heroines choose to go into battle — what to flaunt, and what to protect — says a lot not just about how each heroine moves through her narrative, but how her humanity can resonate in the real world, too.

Here's the best of the best, ranked:

1900s: MILLY THEALE, THE WINGS OF THE DOVE BY HENRY JAMES

Milly Theale, the poised heroine of Henry James's 1902 novel, may not immediately come to mind as an especially stylish leading lady. She certainly doesn't embrace the luxury her outstanding wealth may afford her as, say, Edith Wharton's Lily Bart does — rather, Milly is often depicted in modest (yet undeniably lush) black garb. Her somber wardrobe reflects the captivating young woman's ailing health, as well as her outsider-Yankee status among London's posh upper ranks. But this early 20th century New Yorker is a truly independent woman, and I like to think of her as a foremother to us modern city dwellers' penchant for monochromatic dressing. Rather than austere or stuffy, Milly's pointedly understated dress provides a grown-up foil to her pastel-clad peers.

Milly, three minutes after Kate had gone, returned in her array – her big black hat, so little superstitiously in the fashion, her fine black garments, throughout, the swathing of her throat, which Densher vaguely took for an infinite number of yards of priceless lace, and which, its folded fabric kept in place by heavy rows of pearls, hung down to her feet like the stole of a princess.

Madame Léa is the ultimate cougar. Though she’s middle-aged, she uses her confidence, her charisma, and her rockin’ body to pull Chéri, a young (engaged) stud and the darling of upper-class Paris during the Belle Époque period. When we first meet her, Léa is lounging in bed, like the louche French sex goddess she is.

At the age of forty-nine, Léonie Vallon, called Léa de Lonval, was nearing the end of a successful career as a richly kept courtesan … She liked order, fine linen, wines in their prime, and carefully planned meals at home … Her contemporaries were jealous of her imperturbable good health, and he younger women, whose figures were padded out in front and behind after the fashion of 1912, scoffed at her opulent bust. Young and old alike envied her the possession of Chéri ... As for her body – "Everyone knows," Léa would say, "That a well-made body lasts a long time." She could still afford to show her body, pink and white, endowed with the long legs and straight back of a naiad on an Italian fountain; the dimpled hips, the high-slung breasts, ‘would last,’ Léa used to say, "till well after Chéri’s wedding."

Colette, a quintessential French bohemian novelist, celebrates Léa's infamous body; the heroine is mostly naked, but when she does finally get dressed, she languidly “slips into a wrap.” And who better to depict this fierce female than Michelle Pfeiffer, a queen cougar of our modern age? She’s radiant in the 2009 film version of the illustrious novel, showing an ever-dashing Rupert Friend who’s boss.

Count on this stylish 1929 thriller to feature hard-boiled swagger at its best. Dreamy PI Sam Spade is hired by the mysterious Brigid O’Shaughnessy to follow a man who has allegedly run off with her younger sister — but things turn sour quick, and Spade learns that the glamorous Miss O’Shaughnessy is not who she seems to be. You can be sure she turns the tables in style. In one scene, Spade and the femme fatale meet at the swanky Coronet bar. The detective notes that “She had put on a satin gown of the blue shade called Artoise that season, with chalcedony shoulder-straps, and her stockings and slippers were Artoise,” which she accessorizes with “a small dark hat and a grey kidskin coat.” So chic.

1930s: TOPAZ MORTMAIN, I CAPTURE THE CASTLE BY DODIE SMITH

Topaz Mortmain is the cool stepmom we all wish we had: the ethereal, whimsical beauty radiates warmth, love, and a progressively permissive attitude. 17-year-old Cassandra’s loving relationship with her 29-year-old stepmother is as romanticized as the crumbling medieval castle the Mortmain family calls home. But this sunny 1949 novel, which takes place in the mid-1930s, relishes in its saccharine nostalgia for the carefree, pre-war era. Topaz is the ultimate free-spirited English rose, a porcelain-skinned nymphet as natural draped in emeralds as she is in oil-skinned Wellies.

She is a famous artists’ model who claims to have been christened Topaz — even if this is true there is no law to make a woman stick to a name like that. She is very beautiful, with masses of hair so fair that it’s almost white, and a quite extraordinary pallor. She uses no make-up, not even powder … I am very, very fond of her — it is nice to have written that just as she appears on the kitchen stairs. She is wearing her ancient orange tea-gown. Her pale, straight hair is flowing down her back to her waist.

1940s: CHIYO SAKAMOTO, MEMOIRS OF A GEISHA BY ARTHUR GOLDEN

Arthur Golden’s 1997 novel portrays the enigmatic Japanese geishas during WWII. In particular, the writer dedicates pages at a time toward describing the geishas’ complicated ensembles. Rightfully so: not only are the geishas’ costumes gorgeous, but they reflect the painstaking dedication, and the complicated social politics, these women endure to perfect their trade. After years of struggling through poverty and abuse — and hours of hair and makeup prep — narrator Chiyo marvels at her costume's transformative powers before attending the ceremony that would officially designate her a geisha.

I knew that the person kneeling before the makeup stand was me, but so was the unfamiliar girl gazing back … She wore the magnificent makeup of a geisha. Her lips were flowering red on a stark white face, with her cheeks tinted a soft pink. Her hair was ornamented with silk flowers and sprigs of un-husked rice. She wore a formal kimono of black, with the crest of the Nitta okiya … Beginning at the hem of my gown, an embroidered dragon circled up the bottom of the robe to the middle of my thigh. His mane was woven in threads lacquered with a beautiful reddish tint. His claws and teeth were silver, his eyes gold — real gold.

You may have put down Atlas Shrugged in high school, but heroine Dagny Taggart is reason enough to push through this 1957 megalith. As the powerful executive of Taggart Transcontinental, Dagny exudes HBIC attitude in a male-dominated world. She knows that a shrewd business sense, and being the smartest person in the room, will trump doubt in haters and garner trust from those who matter. But a sleek yet feminine wardrobe — as modeled by Taylor Schilling in the 2011 movie — doesn’t hurt, either.

She stood as she always did, straight and taut, her head lifted impatiently. It was the unfeminine pose of an executive. But her naked shoulder betrayed the fragility of the body under the black dress, and the pose made her most truly a woman. The proud strength became a challenge to someone's superior strength, and the fragility a reminder that the challenge could be broken.

“That Cherry Valance was a real looker” — so says our rakish gangster hero Ponyboy Curtis, who puppy-loves the rival-gang broad. The Soc chick, who's best known for the bright red hair that's the source of her namesake, is way classier than the rough-and-tumble Greaser girls. Plus, she’s rich, a cheerleader, and way ahead of the pop-culture curve: Cherry and her pals “liked the Beatles and thought Elvis was out.” The gorgeous Diane Lane rocked Cherry's good-girl-with-an-edge '60s look in the 1983 version of this classic teen read.

1970s: THE LISBON SISTERS, THE VIRGIN SUICIDES BY JEFFREY EUGENIDES

Jeffrey Eugenides’ tragic, tow-headed quartet is the stuff of modern mythology, as evidenced by the novel’s spooky use of a Greek-chorus narration. The Lisbon sisters possess a special kind of eerie beauty, made all the more American-Gothic by their mother’s insistence on Victorian levels of modesty. Take, for instance, their collective Homecoming looks: rather than the silky, powder-shaded gowns favored by their groovy peers, the Lisbons make their own prairie-perfect frocks for the occasion. It may not have been mainstream-cool, but it was enough to make Trip Fontaine swoon.

The girls are lined up in their party dresses, shoulder to square shoulder, like pioneer women. Their stiff hairdos ...have the stoic, presumptuous quality of European fashions enduring the wilderness. The dresses, too, look frontierish, with lace-trimmed bibs and high necklines.

Weetzie Bat is the ultimate Manic Pixie Dream Girl with a brain. This 1989 YA classic, Francesca Lia Block’s debut, is a kitschy ode to boho-punk L.A., to being young and unapologetic, and to revealing real-life issues like AIDS and gay marriage — a breakthrough for both its time and its genre. It’s a magical Technicolored dreamscape, with an oddball heroine to match. We all wish we had the guts to rock Weetzie’s kooky DIY wardrobe, like her epic first-day-of-school look, as observed by her soon-to-be-BFF Dirk:

But on the first day of the semester, Dirk saw Weetzie in his art class. She was a skinny girl with a bleach-blonde flat-top. Under the pink Harlequin sunglasses, strawberry lipstick, earrings dangling charms, and sugar-frosted eye shadow she was really almost beautiful. Sometimes she wore Levi’s with white-suede fringe sewn down the legs and a feathered Indian headdress, sometimes old fifties’ taffeta dresses covered with poetry written in glitter, or dresses made of kids’ sheets printed with pink piglets or Disney characters.

No list of fashion-forward heroines would be complete without Claudia Kishi. Though all the Baby-Sitters Club members have their own, unique aesthetics (personally, I’m more of a Mary Anne), none can deny the sheer ’90s brilliance of Claudia’s arts-and-craftsy, mix-and-match getups. The first time we meet her, in Kristy's Great Idea, Claudia "was wearing short, very baggy lavender plaid overalls, a white lacy blouse, a black fedora, and red high-top sneakers without socks. Her long black hair was carefully arranged in four braids."

"I felt," Kristy laments, "extremely blah compared to her." Don't we all, Kristy. Don't we all.