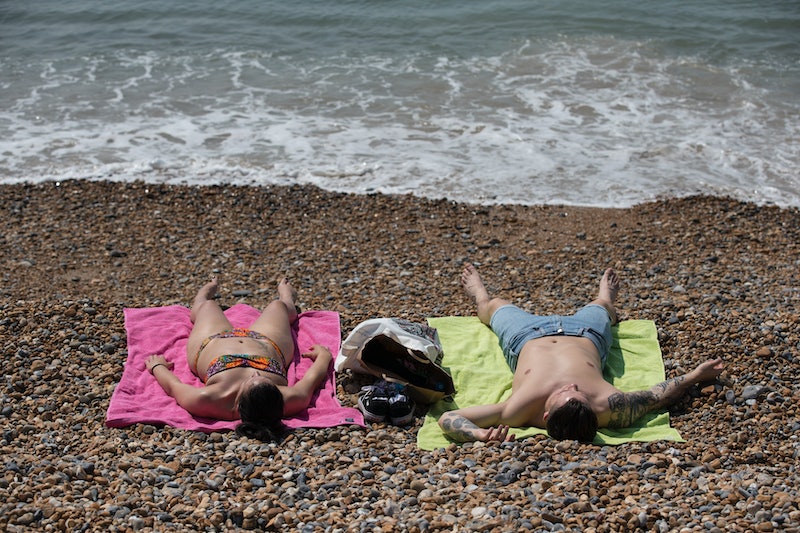 When you think of the ABC reality show Shark Tank , warm and fuzzy feelings do not usually come to mind. It's nothing personal, it's just business, and the sharks only want to hear about how your new and amazing whatchamacallit will earn them lots and lots of cold, hard cash. But will Honeyfund still be able to charm them with its sweet concept? Honeyfund is a crowdfunding website for soon-to-be-married couples trying to get their finances in order for their wedding. The website allows them to set up a profile and ask their wedding guests and total strangers alike to donate money that will go toward their honeymoon, hence the name Honeyfund.

This is for smart couples who would totally rather go on an awesome trip to Hawaii than receive three million toasters as wedding gifts. They do miss out on scanning every item in Bed, Bath & Beyond with that giant registry gun, though. But life is all about making sacrifices. So Honeyfund sounds really lovely and all, but will the sharks be impressed? The website is currently a free service for engaged couples, so Honeyfund's founders are really going to have to work hard to convince the sharks that their site is lucrative.

But let's forget about them for a minute and focus on you. Whether you're getting married soon or just want to get an early start on your post-nuptials planning, Honeyfund is up and running. Here's what you need to know about the honeymoon registry website so that you can start fundraising for the vacay of your dreams now.

Honeyfund is a free honeymoon registry that anyone can sign up for. Just head over to the website, register your name and email address, and you can start creating your registry. You can list and describe various parts of your honeymoon, from airfare to hotel stays to restaurant bills, and how much each will cost. People can select which items they'd like to donate money for and how much they'd like to give. It's set up similarly to Kickstarter, where each item has a limited number of supporters that can donate at various price points. You don't have to only raise money for your honeymoon either; it can be for any type of cash wedding gift.

Those who decide to make contributions toward your gifts can either send you cash or checks directly, or they can pay through PayPal or credit card, but each of those options comes with processing fees for the couple. You can also upgrade your Honeyfund registry with packages that start at $19.99 and allow you to do things like make your profile prettier and include a photo slideshow of the gifts you want. However, if you're already crowdfunding to help afford your honeymoon, you might be better off forgoing the upgrade and saving that money for something more fun, like a cheesy honeymoon souvenir.

The founders could have used a Honeyfund

When Honeyfund's founders Sara and Josh Margulis got engaged in 2003, they had everything they needed in terms of the traditional wedding gifts that seem to have come from a raid of every major store's housewares department. So they decided to set up a honeymoon gift system on their wedding website instead. They raised $8,000, which allowed them to take a trip to Fiji, and they even had some left over to donate to charity. And then voila, Honeyfund was born to serve couples just wanting a honeymoon as a wedding gift. Blenders need not apply, thank you very much.

I'm always wary of established companies that come on Shark Tank rather than those just trying to get off the ground who obviously need the money. Honeyfund launched in 2006, and so far it seems like its done pretty well for itself. More than 250,000 couples have signed up for the site, who have received a combined total of $172 million, $57 million of which they got in just the last year, The Press Democrat reported in January. The company's revenue has also increased by at least 150 percent each year during the past three years. The website has also gotten a lot of publicity, having been mentioned on Good Morning America , and in The New York Times and Martha Stewart Weddings . TIME even named Honeyfund one of the 50 best websites of 2012. Honeyfund seems like it's got a good thing going on its own, so why does it need to waste time on Shark Tank? Either the company really needs help with something only the sharks can provide or it just wants even more free publicity. I hate it when the latter happens.

Not planning a honeymoon? No problem!

After the success of Honeyfund, Sara and Josh launched Plumfund in 2013. This is more of your traditional crowdfunding website that allows you to raise money for basically anything. You can ask the people of the Internet to help you take that birthday trip to Europe, build some much-needed renovations for your animal shelter, or help someone in a bit of a financial pickle. If you've got some cash to burn, there's someone out there who will gladly accept it for whatever project their heart desires.

But does anyone else think it's weird how these crowdfunding experts aren't practicing what they preach by entering the Shark Tank to ask for money? Trippy, man.