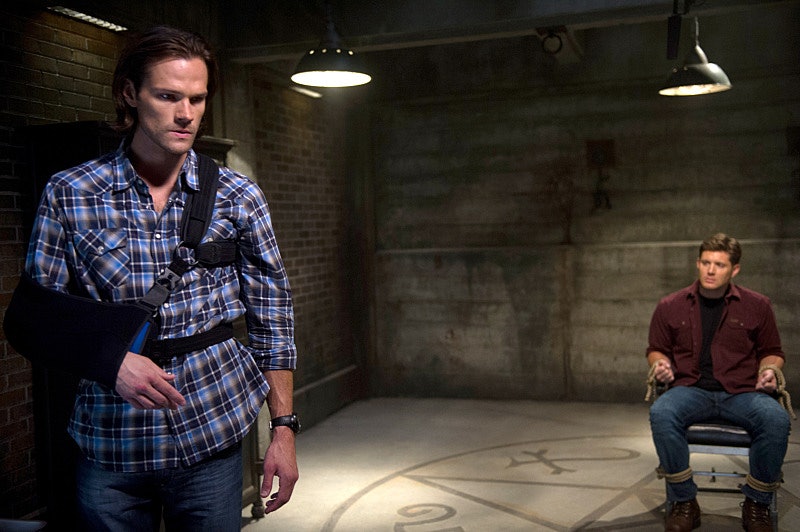 Wow, if that wasn't one of the most intense episodes of Supernatural from the last few seasons, I don't know what is! Tuesday night's Supernatural episode "Soul Survivor" (directed by Jensen Ackles!) followed Sam's struggle to turn his brother from Deanmon to human form. And it was not easy. In fact, saying it was hard would be one of the greatest understatements in television history. The episode began with Dean terrorizing his brother for attempting to try and give Dean his humanity back as the Deanmon was not even slightly interested in becoming a human again. He went on and on about how he would kill Sam when he inevitably escaped. But Sam kept trying to cure Dean by injecting him with sanctified blood as the boys learned was the cure to demonhoon in Season 9. The only problem with the treatment: It was potentially harming Dean more than curing him, as it caused him immense pain every time he was injected.

Sam called Castiel for help, but the angel was busy for a while dealing with his failing health among other things (like thwarting a possible romance with Hannah). Sam worried that he was killing Dean and not helping him, and Castiel told him that he had to prepared for the absolute worst outcome: Dean's death. Dean continued to try and screw with Sam psychologically by telling him he knew what Sam did while trying to find him. A flashback revealed that Sam persuaded a depressed man to sell his soul for revenge against his wife in order to call a crossroads demon, capture her, and attempt to get information about Dean and Crowley's whereabouts. Dean told Sam that Sam was a worse monster than himself.

Dean taunted Sam by asking him if he had the stomach to do what was necessary if the demon cure wouldn't work. Would he be willing to kill his own brother? (Answer: There's no way in hell, heaven, Purgatory, or anywhere else). Sam said he had to keep trying because family is all they had. Dean replied with one of the most heartbreaking moments of the episode "Then we got nothing." This line effectively proved that Demon Dean really did not have any humanity inside of him. At this moment, the cure felt completely useless.

Deanmon later escaped his prison thanks to the sanctified blood turning him just human enough to get out of his chains. As he hunted Sam down, the younger Winchester continued to ponder whether or not he could actually kill his brother, but of course, despite Dean's "Here's Johnny" moment from The Shining — that's right he broke down a door with an axe — Sam couldn't kill him. Luckily, Castiel arrived in time to subdue Dean and help Sam administer more of the cure.

In the end, surprise! Surprise! The cure worked! It actually worked! No matter that we've only had three episodes of Demon Dean despite thinking more episodes would feature the elder Winchester without his humanity. I'm not complaining, thank the Lord he's gone! (Perhaps his love of karaoke will stick though, I'm crossing my fingers for that one trait.) While Dean is cured of his demon-hood, Castiel does remind Sam of one major fact: Dean still has the Mark of Cain. Will that make him more susceptible to demon-y weakness or are we looking at a rehashing of his increased bloodlust from Season 9? If that's the case, the revenge-seeking Cole better be wary.