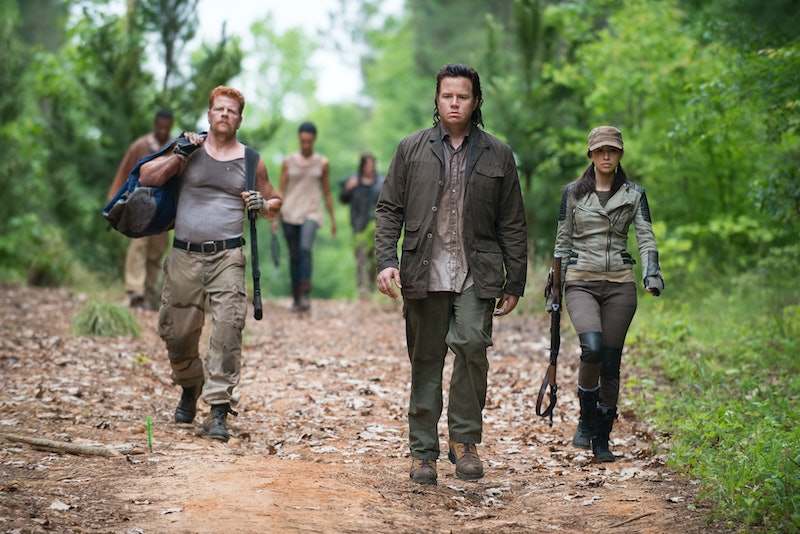 Before the horrifying ending of The Walking Dead episode "Strangers" (you know, where Bob's leg was eaten by cannibals), Abraham and Eugene made a compelling argument to Rick to get the group to head to Washington DC. Rick agreed (to the cheers of everyone), but what does Eugene know about what's really in DC on The Walking Dead? Abraham said, "And we get Eugene to Washington and he will make the dead die, and the living will have this world again." But in my book, Eugene hasn't said anything to make me actually believe that.

Dr. Eugene Porter (if he is in fact a doctor) is a man of few words. But he actually gave some insight to what is in Washington to help sway Rick. When Abraham prompted him to divulge what was in Washington, he said, "Infrastructure constructed to withstand pandemics even of this fubar magnitude. That means food, fuel, refuge. Restart."

Uhh, OK? I think anyone could guess or assume that one of the most prepared locations to be in if a disaster struck would be our nation's capital. To me, Eugene just spouted some big words to sound smart without giving any real substance to what he actually "knows." And he also has not provided sufficient evidence for me to believe that he actually can cure the zombie apocalypse. Point and case:

Rick usually has a sit-down conversation where he sizes people and decides whether or not to believe them before making a large decision. I know everyone has been pretty busy escaping from cannibals and all, but I can't believe no one is making Eugene discuss more about the science that he allegedly knows about. I just wish Rick would tap into his former police officer self and give Eugene a good old interrogation.

After all, Eugene lacks a lot of the essential survival skills that the rest of our favorite walker-slayers have, he is using his "intelligence" to his advantage to have them protect him. Of course, they want to keep him around, and of course, he wouldn't want to tell them everything he knows. But the fact that he is not telling them anything, is a problem.

Although I doubt the truthfulness of Eugene's credentials, I don't think it's a terrible idea to leave Georgia. I do think if there are any answers to be found, Washington would be a good place to go — except for the fact that Washington used to be a populated area, so they will absolutely encounter even larger amounts of zombies than they have been already. When the group traveled to the CDC in Season 1, it was a complete bust with two exceptions — they got a night of partying in (woot) and they did find out that everyone — regardless if they are bit or not — will turn into a zombie when they die. That was huge information and though they would have eventually figured that out on their own, but I think it did help them to survive.

Now that Bob has been eaten (I assume once the leg goes, the rest will too) and Daryl and Carol are out finding Beth (why hasn't Maggie asked about her?!), I think any plans to go to DC are going to be put on hold. But when they do head there, I think they are going to find a lot of zombies — and not a whole lot of answers.