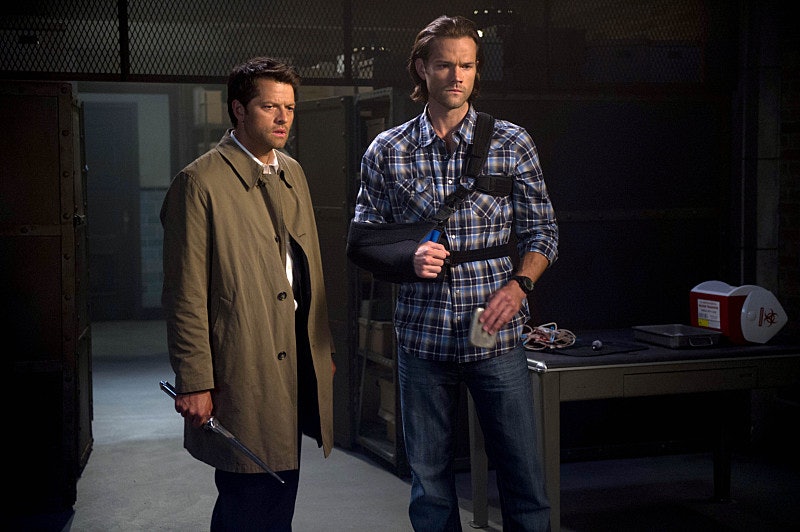 In all of the excitement and hoopla surrounding Dean's demonhood and Sam's attempts to help Dean get back his humanity (which he succeeded at, by the way!), it's easy to forget there are other important storylines in Season 10 of Supernatural . Let's not forget, for instance, that Castiel is still lacking his own grace, which could lead to fatal consequences soon enough. Plus Crowley is having lots of issues with his subordinates after reclaiming his throne in Hell from Abbadon in the Season 9 finale. But the most intriguing storyline is not one that has carried over from previous seasons. It's the introduction of a new character at the end of "Soul Survivor."

We don't know much about this character, in fact we know basically nothing, not even her name. What we do know is what we saw in a five-second glimpse. The woman, a redhead who seems to be living in a very posh home, was sitting comfortably in a chair while two men were on her ceiling dead with stab wounds to their necks. Pretty damn eerie, right? Well, this is Supernatural after all. So what can we surmise from this brief meet-not-so-cute? This mysterious woman could be a new character named Rowena. Rowena was first teased by TVLine as a "tough but elegant woman who will stop at nothing to reclaim her power base," back before the character was officially cast. Apparently at the time, the casting directors and producers were looking for someone who was Scottish or could do a convincing Scottish accent. Hm... Badass Scottish, redhead. Remind you of anyone?

Thankfully an actual Scottish actress, Ruth Connell, was cast in the recurring role. TVLine later gave a little more insight into the character by revealing she was an "old-school witch." We literally know nothing about this lady, her "power base," her plans, or her inevitable connection to the Winchesters.

But from the five seconds at the end of "Soul Survivor," it looks like Rowena has officially made her debut. She was sitting in a swanky house and apparently killed two guys, which proves that if these men were after her "power base," she clearly is capable of doing anything to protect it, like murder. Could Rowena be a new big bad for Season 10? Could she be a witch follower of Abbadon who took over the reins after the Queen B was murdered? Could she just have some other witchy, nefarious plan? I obviously don't know, but I know that all us Supernatural fans probably can't stand the wait before we get answers.