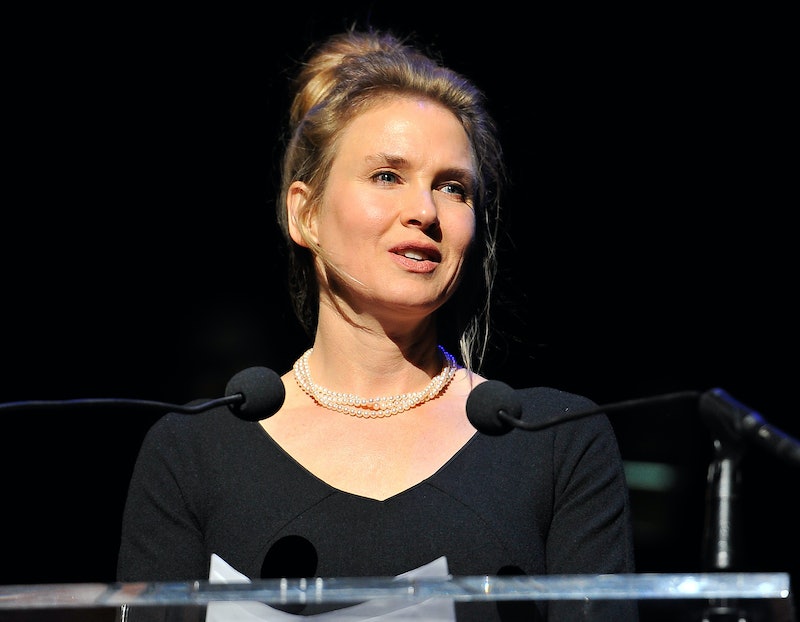 There are times when the Internet can be a warm, welcoming, and supportive place, and then there are times like Tuesday afternoon when the Internet instead becomes disgustingly prejudiced. When Renée Zellweger looked a little different during her appearance at the Elle Women in Hollywood Awards — the nerve of her! — the comments on Twitter ranged from shock to horror to disbelief to mocking. Zellweger had broken the cardinal rule of celebrities: You are not allowed to get older ever. For that, she apparently earned bucket loads of ridicule from the intentionally and unintentionally ageists. Now Zellweger has responded to the looks backlash with a beautiful statement that, quite honestly, she shouldn't have had to make.

"I'm glad folks think I look different! I'm living a different, happy, more fulfilling life, and I'm thrilled that perhaps it shows," she said in a statement to People. "It seems the folks who come digging around for some nefarious truth which doesn't exist won't get off my porch until I answer the door [and address these rumors].... My friends say that I look peaceful. I am healthy. For a long time I wasn't doing such a good job with that. I took on a schedule that is not realistically sustainable and didn't allow for taking care of myself. Rather than stopping to recalibrate, I kept running until I was depleted and made bad choices about how to conceal the exhaustion. I was aware of the chaos and finally chose different things."

It's a sad but true fact that in Hollywood the sheer amount of energy and effort that goes into filming movies, making appearances, and trying to look perfect at every second of every day just in case a paparazzo snaps off a shot of you that will make papers everywhere can lead to some very unhealthy lifestyles. Between celebrities like Rob Kardashian facing fat shaming for daring to leave the house after gaining more weight than he had the last time people saw him or celebrities like Demi Lovato opening up about eating disorders they suffered trying to fit into the mold that they thought they had to be in, you would think that we as a society would start to learn that the unrealistic expectations we have for people and their physical appearance does more harm than good.

Zellwegger is 45 years old and her new look is from being happy and healthy at that age. She hasn't experienced rapid aging and she hasn't been replaced by a completely different woman — all theories that were floating around Twitter on Tuesday as everyone tried hard to figure out what happened. Her new look isn't a mystery that requires solving. While it's nice that she opened up to explain what should have been very obvious to people, Zellweger shouldn't have had to do that. She shouldn't have had to face backlash over her appearance at all. Are we truly remaining such a looks-based society that women actually have to issue official statements when their looks change? Should she have issued a disclaimer ("Warning: Happy and healthy now. May look different as a result. All eyes should proceed with caution")?

"People don't know me in my 40s," Zellweger went on to say in her statement. "People don't know me [as] healthy for a while. Perhaps I look different. Who doesn't as they get older?! Ha. But I am different. I'm happy." Quite honestly, that's all we need to know about that. In fact, that's more than we actually need to know about that because we shouldn't have been asking to begin with. Her face is none of our business, not justifiable for us to speculate on at all, and unless you were wondering if she got surgery out of a place of concern that she would go so far to fit into society's unfair standards for female beauty then that was just an offensive question to be asking. Can we do her, and ourselves, a favor and just move on?