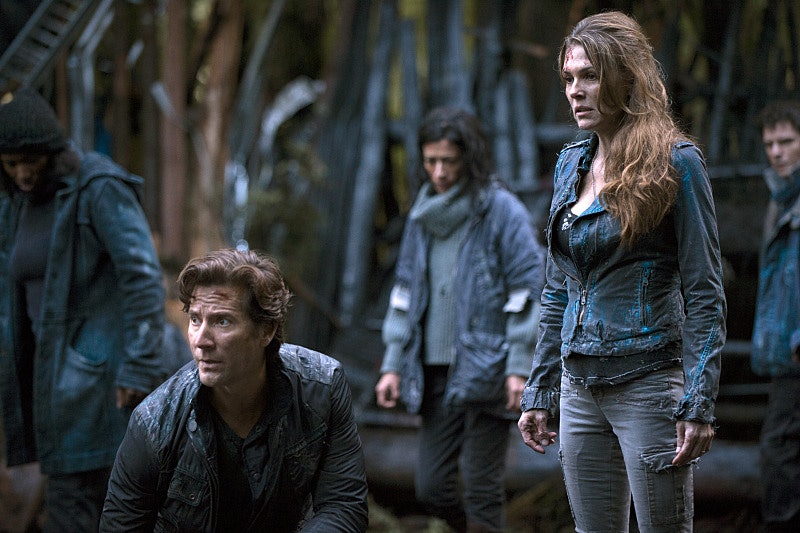 As a viewing public, we seem kind of addicted to apocalyptic and post-apocalyptic shows TV. From the biblical undertones of shows like The Leftovers and Resurrection, to the zombie-filled world of The Walking Dead, to the nuclear war aftermath of The CW's The 100, which owes more than a little of its style to The Hunger Games, we clearly cannot get enough of people caught in uncertain times in a new world. If you're angling to catch Season 2 of The 100 when it premieres on Oct. 22, but need a little refresher on what already happened with Clarke, Bellamy, and the rest of the gang, I've got you covered with a recap of The 100 Season 1.

For the uninitiated, the show takes some of those beloved themes and makes a kind of cheesy but still enjoyable CW teen drama out of them. The story begins in "The Ark," a floating space station where people now live, and everyone except minors receive a death sentence for any rule breaking. The titular 100 are juvenile criminals who are sent to the Earth to see if it is still habitable.

On Earth, they encounter lush plant life and the hint of other surviving humans the show calls Grounders. Most importantly, perhaps, is the discovery of Mount Weather. The creators and cast have a lot to say about Mount Weather, indicating it will rear it's head in Season 2, as possibly a replacement to the Ark, with Ark residents planning on returning to Earth by the finale.

Now it's all well and good that life may survive without the Ark, except for the curious condition that Mount Weather is revealed to us with Clark being trapped in an all white room after being ambushed by Mountain Men (we discover Monty is there, too). But that's getting a little ahead of ourselves. Since this is a CW show, after all, the season was not without its romances. The Clark/Finn/Raven thing might have been a little too heavy-handed and expected of a teen show, but Octavia's Grounder dalliance with Lincoln was a delight, who saved our heroes from other Grounders. Here's hoping Season 2 features more intimate interactions with the Grounders. While Octavia and Lincoln were sweet to watch, helping them escape is what caused Bellamy to meet his end. We don't know if the explosion that killed Jasper also killed Finn (we never see the body), but we definitely lost one of our central characters.

Speaking of Grounders, the inhabitants/survivors of Earth, they also have their own group that strikes fear into their hearts, the Reapers. If you don't remember, Reapers are the viscous cannibals that show zero mercy, proving that while the "new" world has much to offer the Delinquents and the citizens of Ark, it also has a lot of new things to fear. The Mountain Men are their own group too, and while they aren't as terrifying to look at (OK, maybe if you are scared of gas masks), they obviously have a connection to Mount Weather. I mean, the number one thing we know about them is that they are of the mountain.

All this talk of death brings me to the central greatest theme of Season 1: the idea of sacrifice. With resources depleting, leaders of the Ark continually have to decide who to sacrifice and who to save, like tossing the "expendable" juvie teens out, even though the journey into the unknown holds many dangers. This cycle of sacrifice culminated in Jaha sacrificing himself so that others may live in the finale.

If I were a betting woman, I'd wager that we aren't done with the sacrificial death toll or unfolding mysteries just yet. If the second season of The 100 is anything like its first, we've got a lot more intrigue coming our way.