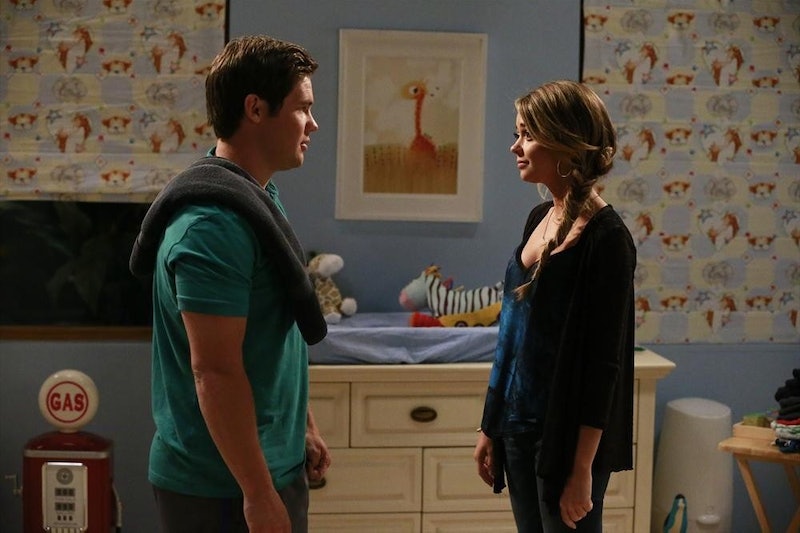 Is it just me, or is it more and more obvious that Modern Family 's Haley and Andy the Manny are headed for romance, possibly even by the end of the season? In the Season 6 episode "The Cold," the pair finally spoke to each other after Cam and Mitchell's wedding, where Haley sent Andy mixed signals and Andy finally broke up with his long-time on-and-off girlfriend Beth. Andy rushed over to the wedding to spend time with Haley, but sadly she shut the potential relationship (or even a hookup) down. This time the tables have turned, as "The Cold" gave us Haley and Andy's first kiss, and then showed a different side of Andy. The pair locked lips after Andy told Haley that it was a good idea they never got together after the wedding, because a kiss from him would have "destroyed" her. (His douchey words, not mine). It seems to me that Andy told Haley this because he wanted her to act on her emotions as he always does, especially because after the kiss Andy walked away like nothing special had happened. But this turn of events makes me wonder something really important for my future enjoyment of this inevitable couple: Are they emotionally ready for a relationship? Are they mature enough for one? My gut tells me that right now they're not.

Before all Modern Family fans turn against me, including probably some of my fellow Bustle writers who want Haley and Andy to get together already, I have to be clear: I also want these two to make it work. As Caitlin Gallagher pointed out, Andy and Haley's relationship and dynamic at this point is eerily similar to Phil and Claire's relationship. It's like that cliché piece of information every relative will always give you: Whether you like it or not, you'll eventually turn into your mother or father in some way. While in some cases, that may not always be the best thing — like how I desperately hope I don't develop my mother's coffee obsession (sorry, Mom) — in Haley's case it might actually be good. As much as Claire can harp on Phil and spoil the fun at times, she's smart, hardworking, independent, and fiercely protective of her family. What's so wrong with that? And Phil is basically the best, so any iteration of him that Haley can get is definitely a good thing.

But right now, neither Haley nor Andy are ready to be together. The biggest problem is that Haley still isn't sure about what she feels for Andy. Does she actually have feelings for him or did she just enjoy feeling appreciated? Are those things one in the same for Haley? Who knows? Only she can figure it out. Though one thing is for sure, that kiss between the pair definitely did something to Haley, the real question is whether or not she'll act on those feelings or be taken aback by Andy's nonchalant attitude.

And speaking of that attitude, what was with Andy's interaction with Haley? Was he trying to hard to play it cool or does he actually not like her anymore? From the way he acted at Mitch and Cam's wedding, it seemed like he was ready to take the plunge into boyfriend-dom with Haley and leave Beth to her obnoxious, rude girlfriend ways. But now suddenly, he's saying things like a kiss between them would destroy her a comparing himself to a drug for women?

Clearly, this pair is not yet ready to officially date. They both need to grow up a bit more, decide what (or who) they want, and just tell each other the truth. Adam DeVine is slated to be in five more episodes this season and Modern Family co-showrunner Christopher Lloyd told TVLine that Haley and Andy are a will-they-won't-they couple. "They don’t quite make sense on paper, but they do circle back to feeling something toward each other," Lloyd said. "They’re both trying to sort out what it is." So I say let them have a little more time to sort their feelings out. There should be no rush to bring them together. They're still young and there's plenty of time for Haley and Andy to become a legitimate couple.